Spartan women return to the hardwood 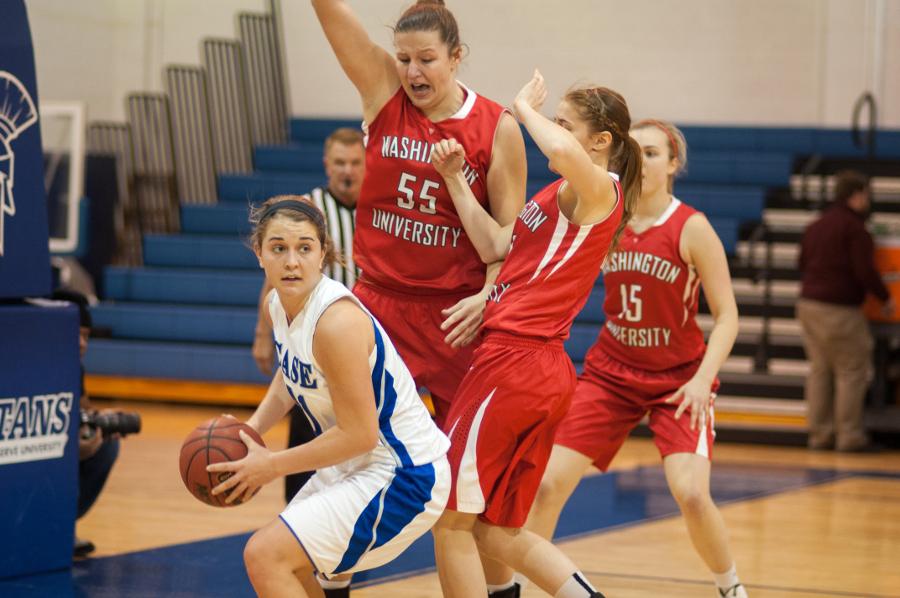 Senior Brooke Orcutt looks to pass out of the double team in a game last season. The Spartans stand at 2-1 on the season so far.

The Case Western Reserve University squad pulled out a 61-56 win on Tuesday against the Baldwin Wallace Yellow Jackets. The Spartans rallied late, ending the game on a 10-4 run and improving their record to 2-1 on the season.

The Spartans started slow, unable to get their inside shots to fall, and Baldwin Wallace scored twice to jump out to a 4-0 lead.

Senior point guard Amanda Germer converted an easy putback on a fast break followup to put the Spartans on the board. After forcing the Yellow Jackets to a shot clock violation on the other end of the floor, sophomore guard Jessica McCoy drained a shot from just inside the arc to tie it at four.

Scoring was a rounded effort for the Spartans in the first half. Orcutt led all scorers and rebounders with six and four respectively; she would finish with 12 and nine.

Trailing 26-21, the Spartans went into halftime with some momentum thanks to a pair of free throws from senior forward Brooke Orcutt.

The teams went back and forth in the second half, with the Yellow Jackets making it a ten-point game before Case charged back, cutting it to 31-27.

Poor perimeter defense led to slew of Baldwin Wallace points, giving Yellow Jackets to a 38-29 lead midway through the second half. The Spartans forced three turnovers in quick succession after switching to a 1-3-1 zone, but failed to capitalize on two of those free possessions.

Things began to click for Case near the end of the game, and they cut the deficit to 45-42 with six minutes to go thanks a combination of strong defense, free throws, and points in the paint.

A three-pointer from McCoy brought the Spartans within two, and senior Berit Eppard tied the game 47-47 with a low-post lay-in.

Eppard later hit a baseline jumper to put the Spartans up two with half a minute to play. Junior forward Laura Mummey tallied a steal and hit a free throw after an intentional foul, sealing the Yellow Jackets’ fate.

Eppard packed the stat sheet; her 16 points led all Spartan scorers, and also finished with 7 rebounds and 7 assists. McCoy also turned in a solid 14 point performance, hitting the only two Case three pointers of the game.

The women will be back in action against Kenyon College next Tuesday, Nov. 25. Their next home game takes place Saturday, Nov. 29 against Wittenberg University.