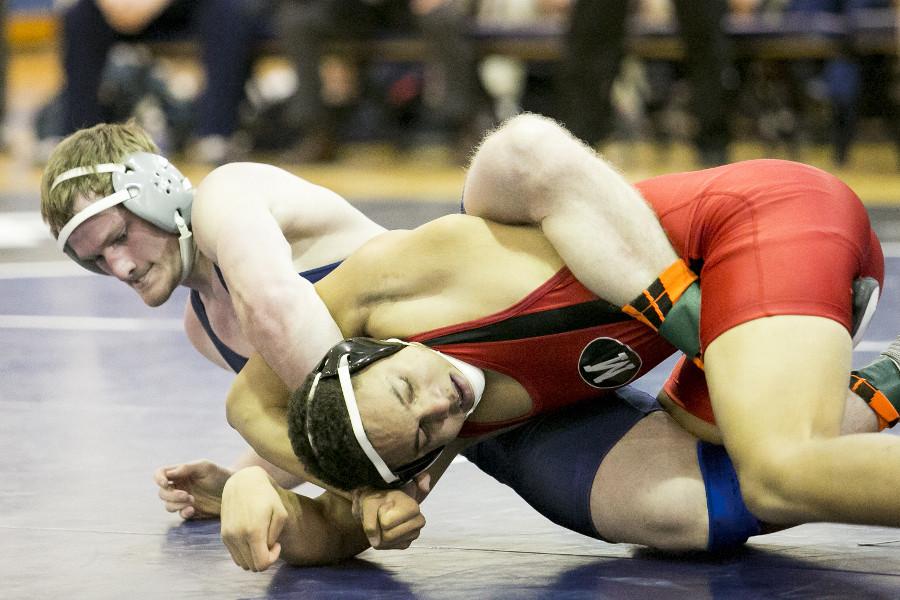 Nick Lees pins his opponent this weekend during the Si Ostrach Meet. Lees earned UAA Wrestler of the week in the Spartans first win of season.

Perhaps it was a case of home court advantage, maybe it was luck. More likely it was the hard work of the Spartans finally coming to long overdue fruition. The Case Western Reserve University wrestling team notched their first head-to-head win of the season as they bested Muskingum University at the Si Ostrach Meet hosted on campus Jan. 23. The win boosted the Spartans to 1-5 on the year.

The Si Ostrach Meet was originally scheduled to be a tri-meet between the Spartans, Muskingum Fighting Muskies and the Presidents of Washington and Jefferson University. However the Presidents were unable to make it to Cleveland due to weather conditions, limiting the action to a dual meet.

The meet kicked off with two Spartan losses as the Fighting Muskies picked up victories in the early weight classes, the 125-lb and 133-lb bouts. The CWRU squad rallied back from the 9-0 hole starting after Muskingum forfeited the 141-lb bout and the six points that came with it.

The Fighting Muskies followed up with a pair of victories at the 157-lb and 165-lb classes and seemed poised for the victory. However the Spartans rebounded and rattled off four straight victories.

Fourth-year student Nick Lees kicked off the rally with a crushing 22-2 victory by technical fall, in the 174-lb matchup. It was Lees’ 10th win of the season, which leads the Spartans on the year. His performance, his final at home for the Spartans, also garnered Lees’ his second UAA Wrestler of the Week honor this season.

The Spartans will look to build on the victory as they head to Wheaton, Illinois to compete in the Pete Willson Invitational this weekend. The tournament is hosted by Wheaton College and kicks off this evening Friday, Jan. 29 and carries into Saturday, Jan. 30.

The Spartans will have tough competition, however, as they take on a loaded field of 29 other squads. The field includes nationally ranked University of Wisconsin-La Crosse second overall, third overall Messiah College, Alma College and Elmhurst College who rank at seventh and eighth and finally 14th overall University of Wisconsin-Whitewater.

Other teams of note will be the University of Chicago and crosstown rival John Carroll University. The trip will be a chance for the Spartans to scout out UChicago before the University Athletic Association tournament at the end of the year.

The action and the Spartans’ shot at strong forward progress kicks off Friday, Jan. 29 at 12 p.m.