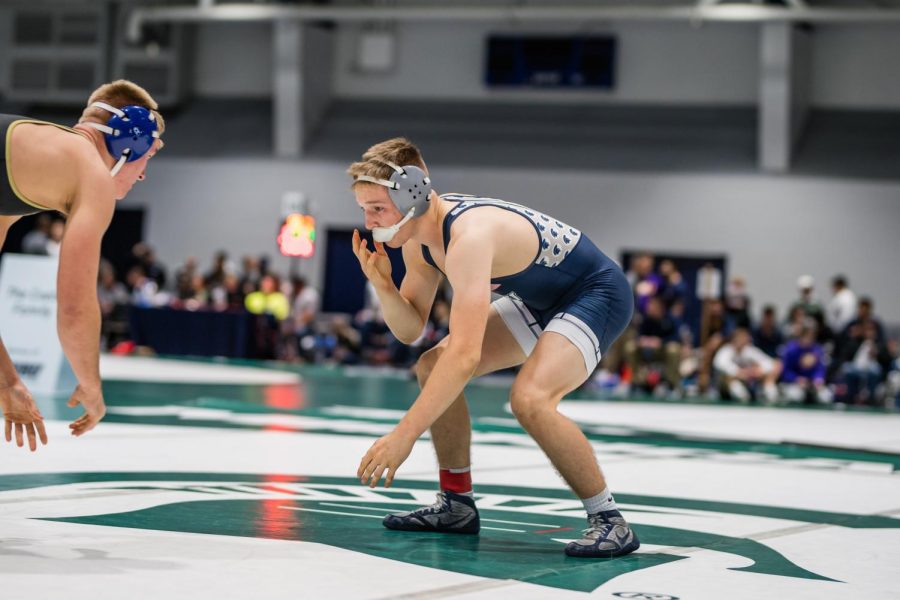 The Spartans’ second dual match was against the Waynesburg University Yellow Jackets. Though the Spartans showed improvement, they still lost 26-18. After the Yellow Jackets forfeited the opening matchup, they turned their 6-point deficit into an 8-6 lead, after recording a decision followed by a technical fall against CWRU. Fourth-year Andrew Hoover answered with a technical fall of his own to reclaim the lead for the Spartans. However, the 3-point lead was instantly nullified when Waynesburg recorded their second decision of the dual match. Collier fought to keep the Spartans ahead with a major decision over Zach Mackall, but this 15-11 lead would, disappointingly, be the last time the Spartans were ahead of Waynesburg. The Yellow Jackets’ back-to-back pins that followed put the Spartans at a 23-15 deficit, and though Kent successfully recorded his second decision of the meet in the second last matchup of the dual, Waynesburg finished on top with a decision in the final bout.

As the Spartans fell to zero wins and two losses in the meet, it seemed as if they were in for a disappointing weekend. However, they continued to pick up steam with each match that followed, and turned the tables on their next opponents.

Adrian College gave CWRU an interesting dual match that looked like a thriller on paper. The Spartans struck first in their third bout of the meet, with second-year Adam Kates and Clayton winning by decision and a forfeit, respectively. Trailing 9-0, the Adrian Bulldogs tacked on 4 points with a major decision. In the subsequent matchup, second-year Brandon Barton suffered an injury and was unfortunately required to forfeit, which gave the Bulldogs a 10-9 lead. After that, Arch and Collier recorded back-to-back pins for the Spartans, the second time the pair had done so this meet, to establish a comfortable 21-10 lead. Adrian College tied the score up with a subsequent technical fall and a pin, followed by yet another pin, to claim a 27-21 lead. CWRU won the last matchup by forfeit, concluding the dual match in a tie. Per tiebreaker rules, the Spartans claimed their first victory of the meet, as they scored more team points from falls, defaults, forfeits and disqualifications than the Bulldogs did.

The Spartans marched into their final dual match against Kent State University at Tuscarawas reinvigorated from their win. Their high morale helped them put on a show, mercilessly defeating the Golden Eagles 46-12. Throughout the dual match, Kent State scored only twice, in the third and eighth matchups. Meanwhile, the Spartans recorded three pins (Clayton, Collier and second-year Grant Robinson), a major decision (Arch), and four wins by forfeit.

With this strong finish to the meet, the Spartans ended the weekend with two wins and two losses, improving their record to four wins and eight losses on the season. The team will travel to Wheaton, Illinois on Jan. 31 for the Pete Willson Invitational hosted by Wheaton College.