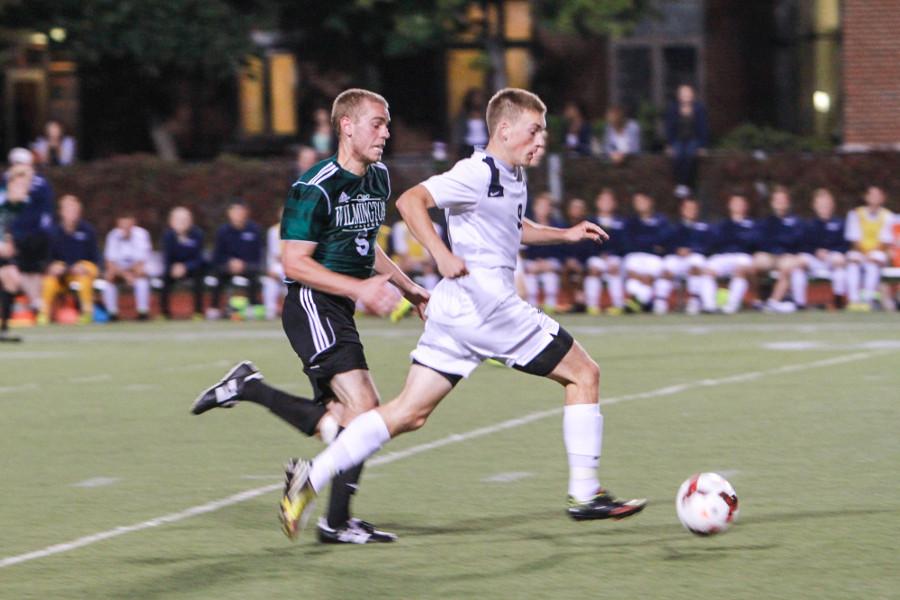 Joshua Prosser out runs an opponent to the ball last season. The Spartans look to compete and succeed this season against some of the top teams in the country.

Bianco has recruited eight incoming freshmen, whose accomplishments in high school and in the club soccer circuit will be sure to aid the team in the coming season. The incoming class includes five state cup champions, three of whom were multiple-time United States Youth Soccer Association Championship series players with Cincinnati United Premier.

“All of the freshman come from winning environments from either club or high school, and all seem to have a good understanding of the demands of the next level. I am definitely excited to have them be a part of our team,” said Balog about the new recruits.

Cvecko and Balog will be two of the players to watch in the upcoming season. Last year, they tied for the lead in total goals scored, each netting seven on the year. With Cvecko heading into his senior year and Balog with a year of collegiate soccer experience under his belt, expect those numbers to only go up for this season. “Our seniors have been team leaders for the past two seasons, so on top of losing several talented players, the team itself is adjusting and taking a new identity,” said Balog.

However, the Spartans face a tough conference, with whom they have struggled in the past. Last year, CWRU finished with a 2-3-2 conference record, narrowly behind Carnegie Mellon University.

Although the Spartans made consistent improvements last year, increased their point total and decreased their allowed goals since 2013, the UAA conference houses some of the best teams in Division III. CWRU faces several challenging opponents, specifically seventh-ranked Brandeis University. Three other schools, University of Chicago, University of Rochester and Emory University, are also ranked in the top 25 nationally.

The men’s team faces a difficult schedule this year, including six games against teams who competed in the 2014 NCAA Championship. Nonetheless, the Spartans are expected to continue improving under their relatively new leadership, and should have a successful season.

Most of the team’s home games should be exciting: They face a variety of teams from across the country, including rivals in Cleveland and in the UAA. The two best games to attend will likely be a midseason game against top conference team Brandeis and senior day against longtime rival Carnegie Mellon.

Be on the watch for a good season from one of CWRU’s most exciting sports teams; the first home game is against University of Pittsburgh at Greensburg on Sept. 5.