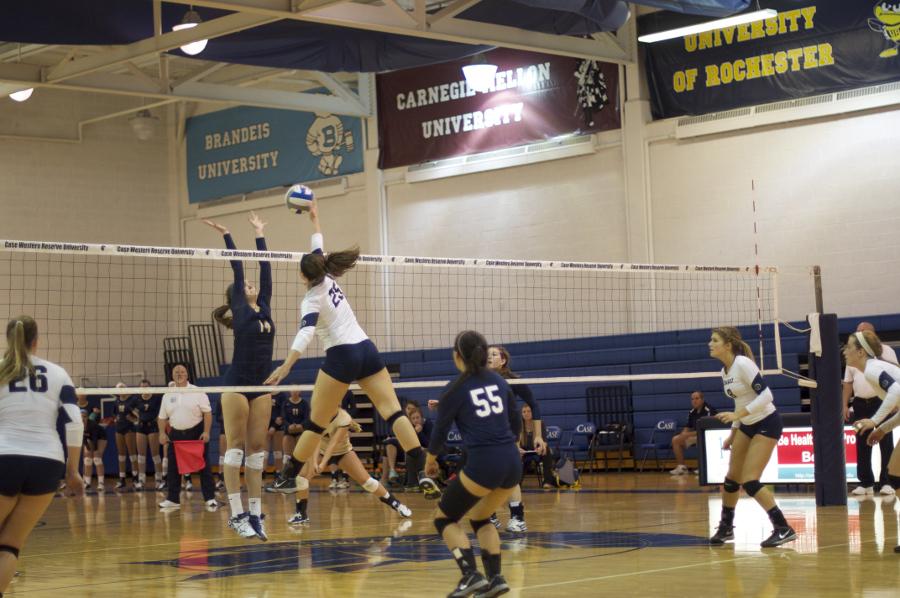 It has been a week of ups and downs for the Case Western Volleyball team.

The team split their two games at the John Carroll Invitational tournament over the weekend before sweeping John Carroll Univesirty at home in Horsburgh Gymnasium Wednesday night.

The Spartans started the week on a high note when they pulled off a strong 3-1 victory over Kenyon College in the John Carroll Invitational last Friday night. The Spartans were led offensively by outside hitter Katie Best and setter Robyn Marks. Marks recorded a double-double with a stellar 18 assists and 11 digs. Best posted a career record of 12 kills in the match with a 0.370 hitting percentage. Her nine digs left her just one short of a double-double of her own.

The Spartans won the first two sets of the match by scores of 25-22 and 25-19. Kenyon stole away the third game as the held off defeat with a 25-22 win in the third match. Case pounded Kenyon in the final set to handily win the match with a 25-8 fourth set.
Hitters Danielle Witri and Marian Barton also added eight and seven kills of their own and Jessica Justice added 14 sets. Defensively, Kristen Mitchell added 15 digs.

Mitchell notched a career best 24 digs in the loss. While middle hitters Kayla Pfaff and Haley Kauffman led the attack with 13 and 12 kills each. Justice and Marks set the game with Justice putting up 19 assists and Marks adding 15 of her own. However, it was Barton who stood out and was named to the all-tournament team with 16 kills on a 0.333 hitting percentage and nine digs for the weekend.

The Spartans capped off the week with a sweep of cross town rival John Carroll University at home on Wednesday night. The win brings the Spartans to 8-4 as they head
into a well-deserved weekend off.

The Spartans won their sets in a spectacular 25-23, 25-22 and 25-22. Despite the sweep the match was intense from the start as both teams rattled off long runs and battled for leads. The loss is only John Carroll’s second of the season and the win will surely be a highlight in the Spartans season.
The Spartans are back in action on Wednesday, Sept. 24 against cross-town rival Baldwin Wallace University at 7 p.m. in Berea.