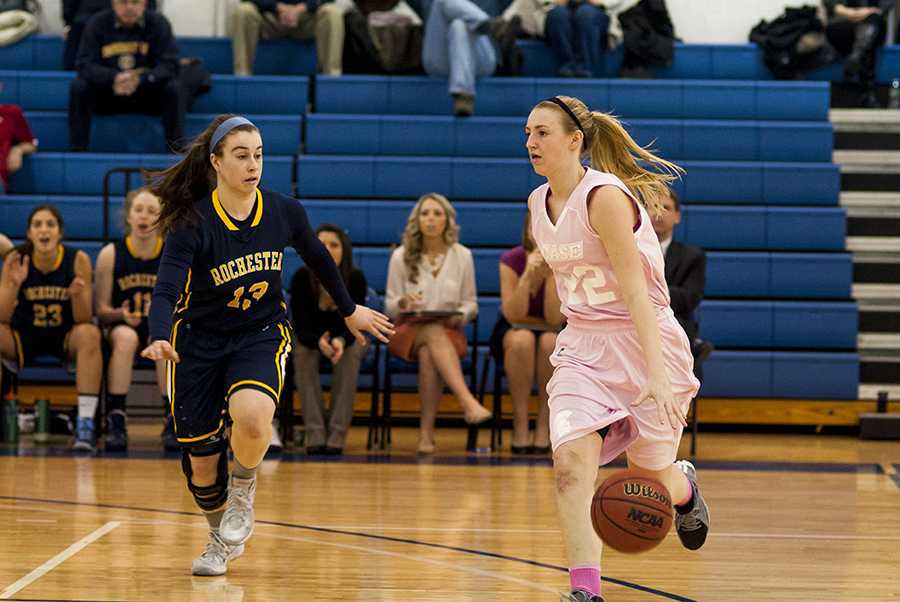 The Spartans found their way home and back on the winning side of things this weekend against the University of Rochester and Emory University. With their wins on Friday and Sunday in Horsburgh Gymnasium, the Spartans snapped an eight game losing streak and find themselves currently sitting at 9-13 overall and 3-8 in the UAA.

Friday’s game against the University of Rochester Yellowjackets came on Play4Kay night: the ladies donned pink jerseys made possible by the CWRU Frances Payne Bolton School of Nursing in a game that came down to the wire. All proceeds from that night went to the Kay Yow Cancer Fund.

Forwards Laura Mummey and Erin Reynolds led the way for Case with 16 points and 14 points respectively while Reynolds, Brooke Orcutt and Julie Mooney each grabbed eight, nine and seven rebounds each, helping to give the Spartans the advantage on the glass.

The Yellowjackets fought hard with the Spartans in the first half, with six lead changes in total and continued to exchange blows late into the first half. It was not until two minutes left in the half, when Mooney was sent to the charity stripe, that the ladies went on a 9-3 run and ended the half up 34-24.

Despite the cushy lead for the Spartans, Rochester came out of the locker room looking to crawl back into the game. Key three-pointers by the Yellowjackets’ Ally Zywicki and 15 points by Loren Wagner gave Rochester a two point lead with 2:39 remaining. But Case’s Orcutt iced the game for the home team with two free throws with :03 left to give Case the win 56-58.

Two days after the nail biting win, the 16-5 Emory University Eagles came to Cleveland on Seniors’ Day, where Seniors Lauren Elkin, Kathryn Huber and Mooney were honored. Mummey once again led the way with 19 points and seven rebounds while Mooney put up one of her best games of the season with 14 points, seven boards, four assists, three blocked shots and three steals.

The beginning of the half was tightly contested with both teams struggling to score. At the 13:38 mark, the Eagles took the lead 8-6, but the Spartans retook it with a free throw by Mummey and from then on they never looked back. The Spartans led from that point on and won the game 62-67 in a game that was not as close as the score made it seem.

The Spartans hit the road next weekend with games against No. 2 ranked Washington University in St. Louis and the always tough University of Chicago.