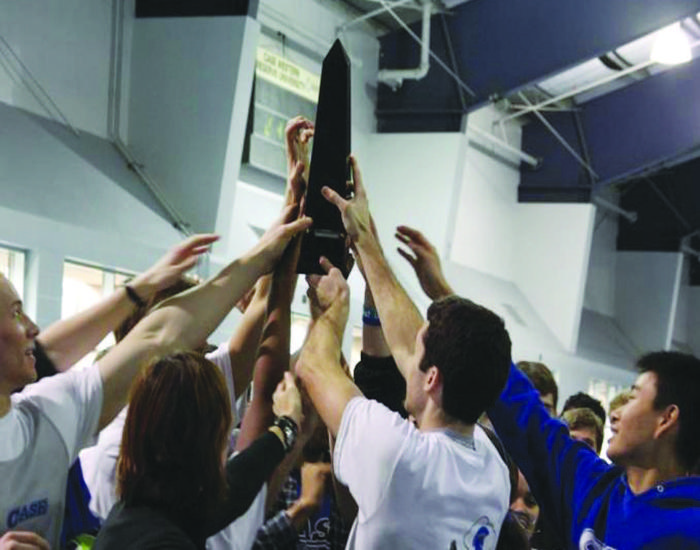 Last weekend, the Case Western Reserve University track and field teams reclaimed the Obelisk trophy in the annual Battle for the Obelisk with Carnegie Mellon University. After a gut-wrenching one-point defeat to the Tartans last year, the Spartan women made sure the Obelisk would stay in Cleveland as they put on a clinic at the Veale Center. The women nearly tripled the Tartan score, winning 95-32. The men improved immensely from last year’s 80-47 loss and had a chance to win late, but fell by 11 points, 69-58. The two teams combined to win the Obelisk 153-101.

The women won nine individual events and the distance medley relay to win by 63 points.

“The women’s team is clearly better than they were last year, and they were really good last year,” said head coach Steve Rubin. “One point was a tough, tough loss last year so we tried to do as much as we could to make sure that didn’t happen again this year.”

The men won six individual events and the distance medley relay as well and stayed close to the Tartans with their depth.

“The men were still behind [to Carnegie Mellon], being 11 points back, and last year that was 30. We weren’t able to do everything that we could do on the men’s side,” said Rubin. “A couple of people were injured and were limited in what they could do. But I felt really good with where the men were.”

The other two blue ribbons for the women came at the feet of the pair of freshman. Keri Walter won the triple jump with a total distance of 35’5.75”, and Kristen Ruckstuhl took home the 5000-meter run in 18:13.78.

Erica Bauerbach, Marion Steines, Brooke Simpson, and Cabrera were all part of the women’s distance medley relay that cruised to a 19-second victory in 13:21.97.

The men also had a pair of double winners: senior Matthew Jurcak won the 200-meter dash in 22.88 seconds and the 55-meter hurdles, and sophomore Andrew Barnhart won the long jump with a distance of 21’11.5” and the triple jump with 42’6”.

Phil Yeung, Jim Mather, Michael Perisa, and Chris Kelly made up the Spartan distance medley relay that finished first in 10:37.15, three seconds ahead of the Tartan ‘A’ squad.