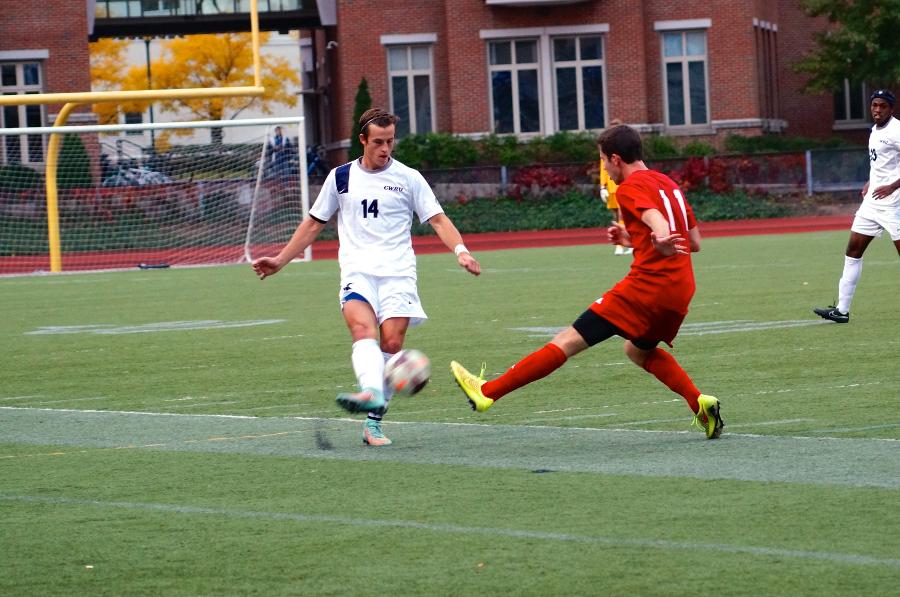 Ryan Meyer clears ball from the back line

It was the Chris Cvecko and Calvin Boyle show two weeks ago as the Spartans men’s soccer closed out their final home stand of the season.

The Spartans played their final two games at DiSanto field this season against Washington University in St. Louis and the University of Chicago, both top University Athletic Association rivals. Offensively, Cvecko led the Spartans while freshman keeper Boyle kept every shot out from between Case’s posts throughout the two games. On the season, the Spartans now stand at 8-4-3 on the season and will finish up on the road.

Against the Washington University in St. Louis Bears, the Spartans were led by midfielder Cvecko who found the back of the net in the first, before setting up sophomore Jacob Grindel in the second half.

The two teams traded blows on either side of the pitch until the 30th minute, when Cvecko broke through the Bears’ defense as he collected a loose ball in the box, maneuvered past the defense and netted a powerful shot into the right corner of the net.

The teams returned to trading chances until the end of the half and into the second half when Grindel put the game firmly in the Spartans hands. In the 67th minute, Grindel collected a strong center by Cvecko and rocketed it past the Bears keeper.

Boyle made four saves in his fourth shutout for the season, but it was the Sunday match in which Boyle shined.

Against the University of Chicago, the Spartans battled to a 0-0 tie and Boyle’s standout play kept the Spartans in the game.

Boyle made 13 saves in the match and was key in holding back the first in the conference Maroons. It was Boyle’s third straight shutout, and has not allowed a single goal in the past 311 minutes of play. Boyle has had 66 saves on the season and a fantastic 0.88 goals per match average. Boyle’s play was capped by his second stellar penalty kick save this season to keep the match scoreless, and his play earned him UAA Defensive Player of the Week honors.

The top offensive chance for the Spartans came early in the game when Joshua Prosser’s shot went just wide in the 12th minute. The two teams had many strong chances but due to stellar defense the two teams were unable to find the back of the net.

The Spartans have had 11 days off to rest and prepare and will be returning to competition Friday night at top rival Carnegie Mellon University. Kickoff is set for 5 p.m.