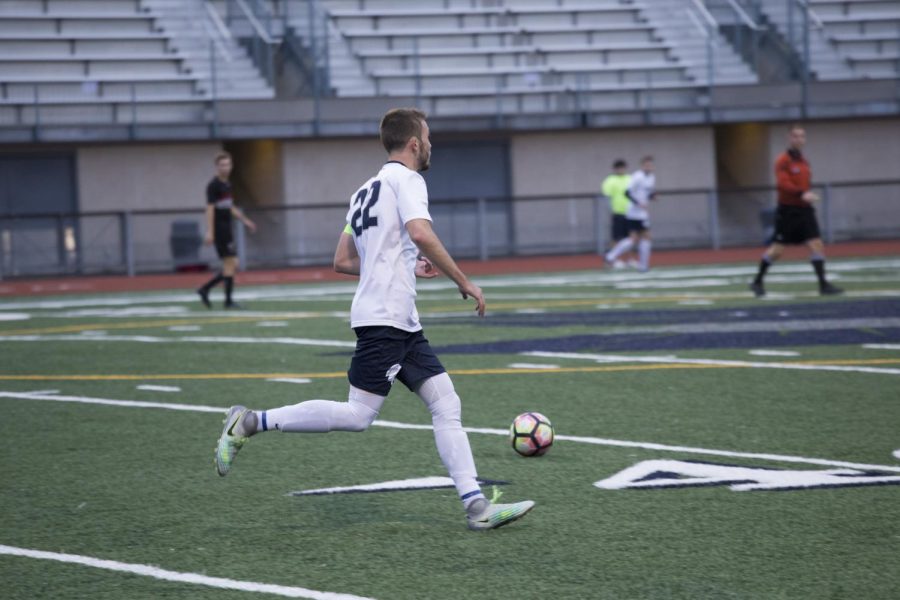 Fourth-year veteran defenseman Jack Rademacher searches for a teammate, so he can pass the ball.

The Spartans ended on a high note against the Tartans, giving a bitter season a sweet finale.

As the teams gathered, all the players knew that this would be the last regular season game. They all knew that this game had to count. And they showed it in their play.

During the first 15 minutes of the game, little happened besides a barrage of fouls from both sides. But in minute number 16, the Tartans finally broke through and scored, taking an early 1-0 lead. The shot ignited the rest of the game into action, and the match truly got underway.

A healthy amount of substitutions occurred in the first half, featuring a variety of players. There were also a half dozen corner kicks that led to no scoring, and halftime would come around to a 1-0 lead for the Tartans.

In the second half, Boyle took over at the goal and locked things down. CMU was unable to score another point throughout the half. Boyle’s defense would open up opportunities for his team’s offense, and they took advantage.

After the second half opened to another 30 minutes of fouls, the Spartans finally evened the game up at one apiece when second-year returning midfielder Garrett Winter took advantage of the confused Tartan goalkeeper.

The goal-scoring play started close to midfield after a foul by the Tartans. After the ball was kicked into play, both second-year returning midfielder Marques Manta and third-year veteran midfielder Paul Darmstadter headed the ball over the defenders. The ball eventually landed at the feet of Winter, who immediately launched the ball towards the goal, causing the opposing keeper to flail in a desperate attempt for a save. The game was tied 1-1 with 15 minutes to go.

Five minutes later, the Spartans found themselves again with a free kick off of a Tartan foul. This time, the ball was already much closer to the goal.

Darmstadter took the kick from roughly 25 yards out. The kick was low, and it started in a line headed for the corner flag. But Darmstadter knew exactly what was happening, giving the ball a beautiful curve, sending it around the line of defenders and into the goal. The opposing goalkeeper had hardly moved before noticing what was happening.

Just like that, the Spartans had taken control of the game with 10 minutes to go. Excitement rushed through the fans and the players as it looked like the team would defeat CMU, turning the fortunes from just a year ago.

The remainder of the game was tense, with the Tartans scrambling for a goal. But when the clock stopped, the score remained 2-1, and CWRU finished its season with a 7-9-2 record, with a 3-4-0 record against University Athletic Association competition.