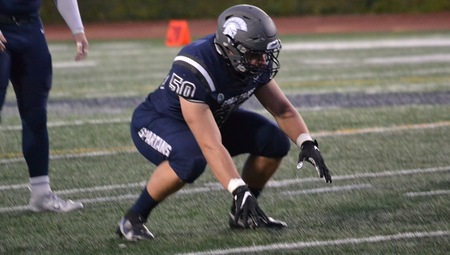 The Case Western Reserve University Spartans’ red-hot start to the 2021 football season fizzled out in the last couple of weeks as CWRU dropped back-to-back conference matchups at home.

Following two impressive road victories to open the season, including a historic 66-33 rout of Waynesburg University, the Spartans surprisingly struggled at home, suffering a 34-12 loss to Westminster University on Sept. 18 and a 37-14 loss to the Washington & Jefferson University Presidents this past Saturday.

Against the Presidents, CWRU’s offense opened the day quietly, going three-and-out on the first drive of the game. The Spartan defense, however, held the Presidents to a punt in return, forced by a timely 5-yard sack from second-year defensive lineman Kaden Tong on third-and-8.

The Spartans made a little bit of headway on their next possession, picking up 34 yards on nine plays, but were forced to punt yet again. Third-year running back Antonio Orsini accumulated 19 yards on six carries and first-year wide receiver Ethan Dahlem hauled in two passes from fourth-year quarterback Drew Saxton for 15 yards on the shortened run.

The Presidents continued to get stuffed by the stout CWRU defense as another third-and-8 sack, this time for 6 yards from third-year defensive lineman Jacob Scheponik, forced a punt. The 7-yard drive pinned the Presidents deep in their own territory and gave the Spartans excellent field position with only 47 yards to go.

As the first quarter wound to a close, the Spartans found themselves in a nerve-wracking fourth-and-1 situation. Second-year running back Sean-Michael James put the Spartans at ease with a powerful and vital 3-yard run to convert on fourth down. Three plays later, Orsini barreled into the endzone for a 1-yard rushing touchdown to give the Spartans the lead. Second-year kicker Brett Callow drilled the extra point to extend CWRU’s lead to 7-0 early in the second quarter.

The Presidents retaliated with ferocity on the next drive, driving 70 yards downfield in less than two minutes en route to a tying score. After the Presidents’ third-year quarterback Justin Heacock connected with fourth-year wide receiver Payton Skalos for 13 yards, third-year running back Joey Koroly stormed through the Spartans’ defense to rack up 31 yards on one run and another 7 on the next. Second-year Spartan linebacker Sean Torres managed to hold Koroly to no gain on the following play, at which point the Presidents opted to switch back to their passing game. Heacock found Skalos for a 19-yard touchdown, tying the game 7-7.

The Spartans’ efforts to retaliate quickly ended in another frustrating three-and-out. With a chance to take the lead, Washington & Jefferson went back to Koroly, who picked up 16 yards on three carries and capped off the drive with a 35-yard receiving touchdown on a pass from Heacock. The Presidents took the lead 14-7 with this score.

Saxton tried to spark life into the Spartan offense with a 22-yard completion to James. Unfortunately, CWRU began approaching nightmarish territory after their ensuing possession resulted in a turnover on downs. An incomplete pass from Saxton gave the Presidents the ball at their own 32-yard line, but the Spartans’ defense came in clutch. Tong and Torres knocked down Koroly for a 3-yard loss and second-year defensive back Marco Toth hurried Heacock into an incomplete pass on third and 13 to force a punt.

With great field position once again, Saxton and Co. marched 57 yards downfield, finding the endzone while smartly eating away at the clock. On third-and-3, Saxton turned on the jets, breaking away for a 19-yard run. After that, it was all DeCaro, who caught a pass for 15 yards, then reeled in another for a 6-yard receiving touchdown. A decisive kick from Callow tied the game 14-14 with just under a minute to go in the half.

Despite the tall task ahead of him, Heacock delivered a catastrophic blow to the Spartans’ defense in just 38 seconds. The quarterback completed three straight passes for 31 yards before sprinting off on a 17-yard run to put Washington & Jefferson at the CWRU 7-yard line. Heacock went right back to Skalos on the following play, and the 7-yard touchdown pass proved to be devastating to the Spartans’ momentum as the Presidents took the lead once again, 21-14.

The second half was an entirely different story from the back-and-forth contest that made up the first half, with Washington & Jefferson outscoring CWRU 16-0. Already up by seven points, the Presidents got the ball first. Heacock took his third sack of the day on the drive, as Scheponik and fourth-year linebacker Michael Amadio took down the quarterback on third-and-10 to force another punt out of the visitors.

CWRU’s streaky offensive performance continued with another three-and-out that gave the ball right back to Washington & Jefferson just inside Spartans territory. The defense continued to make Heacock uncomfortable, forcing four incomplete passes and recording another third down sack, once again by Tong and for a loss of 10 yards. However, the lack of production from the Spartan offense kept giving the Presidents decent field position as they came away with a 34-yard field goal to go up 24-14.

The Spartans’ struggles on offense carried through to the next possession, and they punted again after three plays. Washington & Jefferson carried their subsequent run into the fourth quarter, where Koroly punched it in from a yard away for a rushing touchdown. The drive was highlighted by a 17-yard pass to Skalos, a 24-yard run by second-year running back Justin Huss and a 10-yard sack by second-year linebacker Ryan Santoro.

In an exciting change of events, third-year defensive back D.J. Wolf blocked the extra point kick to hold the Presidents to a 30-14 lead. The monumental block gave the Spartans a fighting chance, as the game was now stuck at a two-score game instead of a three-score game.

Desperate to come away with some points, the Spartans fell back heavily on their passing game, with Saxton putting up 47 yards on 4/10 passing, including an incomplete pass on fourth-and-12 to turn the ball over on downs.

Conversely, Washington & Jefferson wanted to kill the clock with the lead and the ball, so they began to rely on their ground game. Although the drive resulted in a punt, they successfully drained six minutes off the clock on eight running plays.

With only five minutes to go, hopes were slim for CWRU as they went three-and-out for the fifth time. The short punt gave the Presidents a short field to work with yet again, and the ground game put the nail in the coffin. Fourth-year running back EJ Thompson ran for 17, 7 and 2 yards on the first three plays before Koroly ran into the endzone on the next play for a 17-yard rushing touchdown.

Down 37-14, the Spartans turned over the ball on downs once again after an incomplete pass on fourth down. The Presidents got the ball back and knelt to run out the clock and seal their victory over CWRU.

As the Spartans fall to 2-2 on the season, they look to bounce back and maintain their perfect road record next week with a visit to Latrobe, Pennsylvania to take on the 2-1 Saint Vincent College Bearcats.