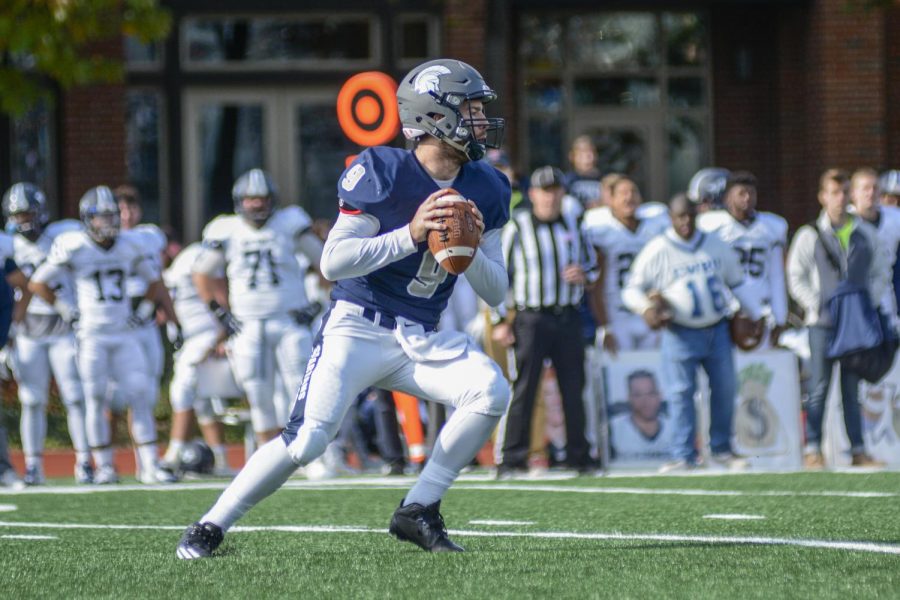 The football team finished its fantastic season with a loss to Mount Union in the second round of the playoffs.

No man could end the Spartans four year long journey. It took The Machine from Alliance, Ohio to stop them in their tracks.

The Case Western Reserve University football team ended one of its best seasons with a 45-16 loss to the University of Mount Union in the second round of the NCAA Division III playoffs on Nov. 25. It was the second ever trip for CWRU to the second round. Mount Union advanced to the national quarterfinals for the 26th consecutive season. The Spartans finished the season 11-1.

“It was bittersweet,” said fourth-year veteran linebacker Justin McMahon. “You realize it’s over now, but you still have all the accomplishments we have this year.”

For the soon-to-be graduating CWRU student-athletes like McMahon, their football careers have come to an end. Over the past four years, the team went 30-12 and secured the school’s second ever playoff victory on Nov. 18. Memorable moments include coming from behind to defeat Westminster College and preserve a perfect season a year ago, a dramatic overtime victory over archrival Carnegie Mellon University to finish the 2017 regular season without a loss and a playoff victory in blizzard-like conditions the following week.

Head Coach Greg Debeljak called the group a special class that will be hard to replace. He, McMahon and fourth-year veteran quarterback Rob Cuda cited the group’s changing of the team’s culture as its lasting legacy. Four years ago, the team finished 3-7 and apathy was rampant. This year, the team accomplished what only one other team in CWRU history ever did, and stayed with Mount Union for three and a half quarters in the final game of the season.

Cuda said, “We’ve always taken pride in changing the culture… We’re very proud of what we accomplished so far, and we’re hoping that the classes underneath us can continue with the success.”

The game itself was closer than the score indicated. CWRU was down by only two scores with less than six minutes to play.

Third-year veteran wide receiver Justin Phan finished the day with a career high 169 yards on 12 catches. Phan’s 60-yard catch in the second quarter set up the Spartans’ first score. One of the starters who will be returning next season, Phan was the Spartans leading receiver in 2017, finishing the season with 773 yards on 62 receptions and seven touchdowns.

“I’m just doing my job, coming down with the ball. It’s nothing that I did out of the ordinary,” said Phan.

The Spartans moved the ball on their first drive. Cuda led the team down to the Mount Union 35 hard line. The Spartans failed to convert a fourth down play, and the drive stalled.

For the rest of the half, it was all Mount Union. Purple Raider defenders swarmed Cuda almost as soon as the ball was snapped and the Spartans could not run the ball. Cuda threw three interceptions in the first half, including one that was returned for a touchdown.

At the half, Mount Union led 21-6. The lone Spartans touchdown came on a 1 yard run from Cuda, the first rushing touchdown allowed by Mount Union all season.

“We’ve never seen guys move like that on the football field. After we adjusted to that, I think we did fine,” said Debeljak.

The Spartans looked much better in the second half once they were accustomed to the speed of the Purple Raiders, but it was not nearly enough. Following a Mount Union fumble, the team drove down the field inside the Purple Raiders 10 yard line. Cuda found Phan four times on the drive and fourth-year veteran running back Jacob Burke added 14 yards on the ground. Fourth-year veteran kicker Ben Carniol ended the drive with a 27 yard field goal to bring the Spartans within 15.

Later in the half, Cuda found fourth-year veteran wide receiver Luke DiFrancesco from 24 yards out to pull the Spartans within 15 again. On the fourth down play, Cuda scrambled outside of the pocket, and DiFrancesco managed to get his feet in the end zone. He finished the game with 245 yards passing and a team leading 81 yards on the ground. The team finished the game with 351 yards of total offense, the most of any team against Mount Union this season.

The Purple Raiders added two touchdowns in the fourth quarter to put the game out of reach.

“We were keeping ourselves in the game… I thought we did alright,” said McMahon.

Though the team will need to replace many starters next season, it has built a solid foundation through the graduating class. Though the group’s journey ended, its tracks still remain. They will be ready to take on The Machine.