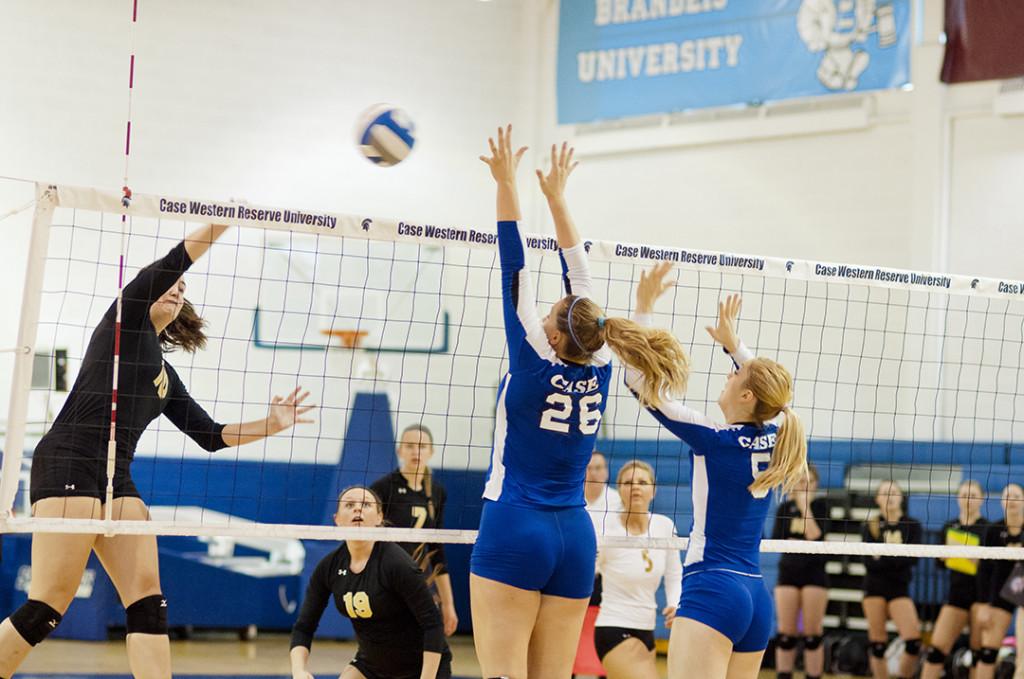 The Spartan volleyball team overcame obstacles to get back to .500 on the season going into the University Athletics Association championship this weekend. The team was riddled by injuries all season and struggled to overcome the youth and inexperience of the team to win against tough opponents. However, in a fitting end to the season, the Case Western team played well against Wooster College to end the regular season with an overall record of 15-15.

This final match was played at the Veale Center with a large crowd of family and friends showing up for the last home matchup. The teams were evenly matched in the first set, with similar scores up until the Spartans went on a run to end the set 25-20. The team saw a similar pattern in each of the following sets, winning narrow but definitive victories against a team that was playing very well. The Spartans won in straight sets with final scores of 17-25 and 25-22 for the last two sets of play.

Coach Karen Farrell was very pleased with the level of athleticism shown by the team during this match. “I thought we played very well. Wooster played a good match, but we still sewed it up in three sets,” Farrell said. “It was a good way to end the season and hopefully add some confidence going forward.”

The Spartans showed a very consistent attack with multiple players tallying high numbers of kills, assists and digs. Sophomore Carolyn Bogart led the team in kills with 12 on the match. Both Bogart and sophomore Katie Best posted 15 digs each, and sophomore Robyn Marks helped set the pace with 22 assists.

The team hopes they can post equally strong numbers during the UAA championship tournament, where they will face off against No. 3-ranked Emory University in the first round. The tournament is run in a basic bracket style with the top teams facing off against the lower-ranked teams in the conference. Going in ranked sixth, the Spartans will have a difficult time cracking the higher tier of play.

Farrell is aware of the challenge ahead. “I think that on any day, we could beat any team if we’re playing our best. But it’s going to be tough to beat Emory,” Farrell said. All the teams ranked above Case have won the majority of their games. Emory is no different with a conference record of 5-2 and an overall record of 18-3.

The team will play a total of three matches, each determined by the preceding result. If the team beats Emory, they will be forced to face-off against an even higher-ranked opponent, as lower-ranked teams are delegated to the consolation bracket. However, they will secure at least a fourth-place finish in the tournament. If they lose to Emory, their best possible final ranking would be fifth, providing they could win the remainder of their match-ups.

Regardless of the result, Farrell is anxious to see how the young team performs at this high level. “This is the time where everything’s peaking, so it’ll be good to see where we are against opponents we faced earlier in the season and now against some tougher competition.”

Here’s hoping that the high pressure brings out the competitive nature in the Spartan squad as they look to improve on their current ranking before the off-season.