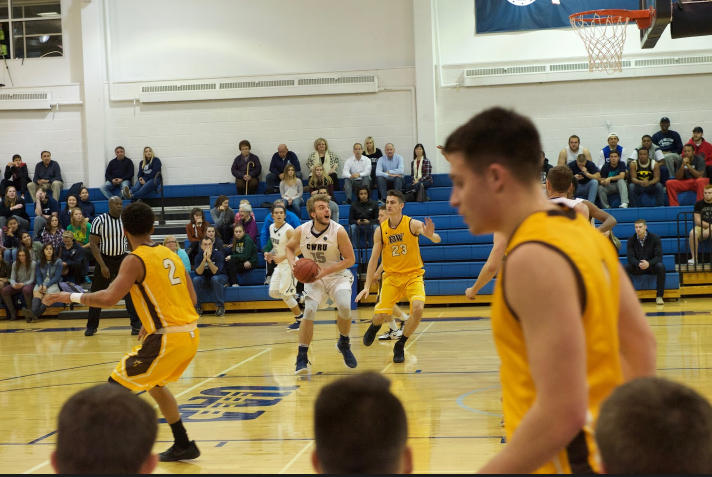 David Black goes up for a shot in the paint during a game earlier in the season. Black scored nine points and nabbed three rebounds in the loss to Adrian.

The Case Western Reserve University men’s basketball team fell to Adrian College on Saturday, 72-64. The Spartans fell to 1-4 on the young season, while Adrian improved to 3-3.

CWRU shot just 40.7 percent from the field in the contest as compared to 55.6 percent for Adrian. Fifteen Spartan turnovers turned into 22 Adrian points, with some coming in crucial points in the contest.

The first half featured a back-and-forth affair, with the Spartans jumping out to an early seven-point lead thanks to the hot start of first-year forward Sam Hansen, who scored a career-high 17 points in his first start of the season.

The two teams continued to go back-and-forth throughout the half, with neither gaining a lead of more than five over the other. A late push catalyzed by third-year forward Eric Black propelled the Spartans to a 34-29 halftime lead. Black made a three-pointer and two free throws, as CWRU ended the half scoring five of the last seven points.

In the second half, Adrian went on an impressive 13-0 run immediately after the Spartans held their largest lead of the contest. CWRU found themselves down by six points with just under 15 minutes of game time remaining after the offensive outburst.

The Spartans would fight back, however, and take a lead five minutes later thanks to Hansen and third-year forward David Black. Their three point lead was short-lived, as the Bulldogs reclaimed it just one minute later. After going back-and-forth throughout the rest of the second half, Adrian would eventually build a lead that the Spartans were unable to overcome.

Hansen connected on five-of-seven three-point tries and went six-of-eight from the floor in the contest. Third-year forward T.J. Duckett registered his third double-double in only the fifth game of the season. Duckett had 10 points and 12 rebounds on the day. Third-year guard Colin Zucker was the distributor of the CWRU offense, leading the team with five assists.

The Spartans had a solid effort in this contest, registering season highs in both three point shooting percentage and assists. The eight point deficit was also the Spartans’ closest loss of the season.

The Spartans play this weekend in the Doc Greene tournament in Huntingdon, Pennsylvania. They will play Lynchburg College tonight at 5 p.m. and then a team to be determined on Dec. 10.