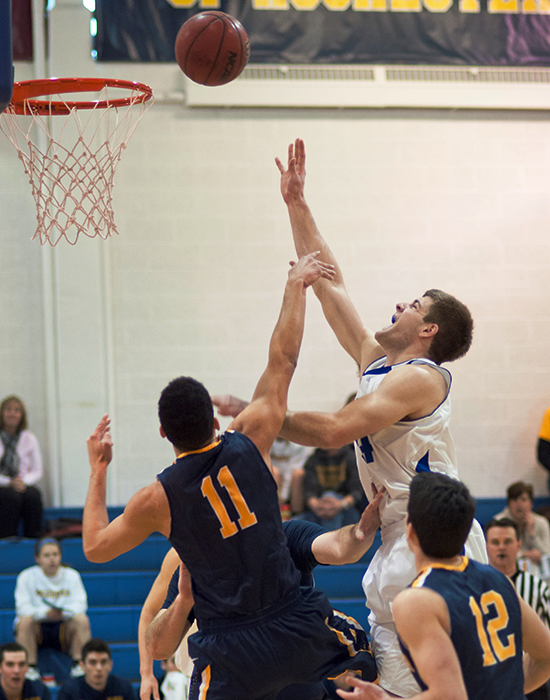 A pair of losses on the conference home opening weekend dropped the Case Western Reserve University men’s basketball team to 1-4 in the University Athletic Association and on a four-losing streak. The loss also dropped them to .500 for the season at 8-8 overall.

In the conference home opener, the Spartans hosted Emory University (3-2, 11-4) in an 82-60 loss. In the second game of the weekend, the Spartans took on the undefeated University of Rochester. The Yellowjackets (5-0, 16-0), ranked No. 2 in the nation, got out to an early lead and held on for the rest of the game on their way to a 88-66 victory.

Against the Eagles, sophomore forward Dane McLoughlin continued his impressive second season for the Spartans. McLoughlin led the Spartans with 21 points, shooting 7-of-9 from the field. McLoughlin is the nation’s top three-point shooter and went 2-for-3 against Emory.

The game began slowly with the Spartans failing to score for the first 4:34 of the game. After getting on the board, the Eagles would go on a 10-3 run to grab a 15-7 lead with 11:22 left to play in the first half.

The back half on the first 20 minutes saw the game pick it up for the Spartans. Senior Tim Chung would hit a three-pointer while being fouled to complete a four-point play to bring the Spartans within a point of the lead. Up just one, 24-23 with 5:51 in the half, Emory would reel off another 9-2 run, extending the visitors’ lead to eight with 3:30 to play.

McLoughlin hit two straight three-point jump shots and sophomore guard Julien Person added another to get within one in the closing minutes of the first half. McLoughlin would follow up with a free throw in the final seconds of the first half to tie up the game at 35 at the half.

Case continued to play from behind for most of the second half, after the Eagles ran out to a large lead after a 14-4 run out of the break and a 17-4 run shortly after to give the visitors a 68-46 lead with 8:32 to play. The two teams would go back and forth for the final minutes of the game, but the Spartans would never get closer than 17.

Joining McLoughlin in double figures were Person, who had 12 points, and Chung, who had 10 points off the bench. Sophomore forward Brian Klements led the team in rebounds with eight.

Against the No. 2 Yellowjackets the Spartans were outmatched in the first half, falling behind early and failing to make up the deficit. The Spartans began the game 1-for-8 from the field and found themselves facing a huge 19-3 deficit just eight minutes in. Senior forward Austin Fowler had 24 points for the day, with 11 of those in the Spartans’ 25 point first half.

Facing a 45-25 deficit at the half, the Spartans continued to give up points, falling as far behind as 31, when Yellowjacket Tyler Senkes hit a jumper to make the score 72-41 with just over 11 minutes to play. Case would continue to push back, but would never get closer than 22 points before the game ended with a final score of 88-66.

The men will return to the hardwood of Horsburgh Gymnasium this weekend as CWRU hosts the eighth annual Throwback Weekend. The Spartans will wear red uniforms commemorating the university’s history as the Western Reserve University Red Cats against the University of Chicago (8-8, 2-3). Tip-off is Friday night at 8 p.m. on Jan. 25. The Spartans will then matchup on Sunday at 11 a.m. against Washington University (2-3, 12-4) when they wear brown uniforms, representing the Case Institute of Technology Rough Riders.

The Spartans are currently a game behind Chicago, Washington, and New York University. A pair of wins would guarantee them at least a share of fifth place before they hit the road next week to take on these two teams again.