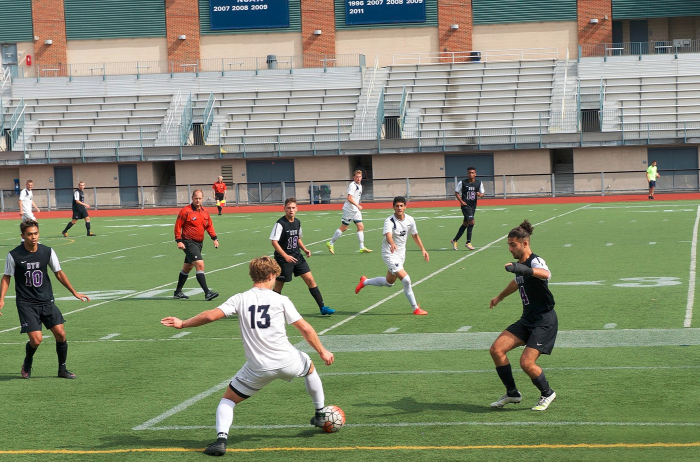 Defenseman Alex Besl tries to dribble past a ring of NYU players during a match earlier this season.

The Spartans took on the Tartans in a rivalry match perfectly fit to finish off the year. Carnegie Mellon University’s (CMU) Tartan team got off to an incredibly quick start, then sealed the deal as time began to wind down. At the same time, they managed to hold down the fort and keep Case Western Reserve University scoreless. Although the year did not go as well as CWRU may have hoped, it provided for plenty of learning experiences to use going forward.

In Pittsburgh, Pennsylvania, the two teams met at CMU’s field. The No. 21 Tartans came onto their home field with a record of 11-3-2 while the Spartans arrived on CMU’s campus with a record of 5-8-4 on the season and a record of 0-3-3 within the University Athletic Association (UAA). Had the Spartans won, it would have been a major upset, but fate was not so kind to the underdog.

It seemed as if the Tartans started with a lead of one goal. Before even the second minute of play elapsed, CMU’s second-year midfielder Zack Masciopinto scored a goal against third-year goalkeeper Calvin Boyle. Tartans fourth-year forward Devin Keane crossed the ball to exactly the place Masciopinto needed, and he finished it in style with a nice header. During the rest of the half, the Spartans got two shots on goal, but both were deflected by the second-year goalkeeper Alec Lam. At halftime, the score remained 1-0, and both teams felt like the game could still be theirs.

The second half continued much the same way the majority of the first half had. Both teams struggled to get the ball into the attacking third, and the score remained unchanged until the 67th minute when Masciopinto once again lasered the ball to the back of the net.

This time, second-year Tartan midfielder Anthony Gulli kicked a straight pass to Masciopinto. The ball was almost deflected by a sliding Spartan, but Masciopinto hopped over the legs and gained control of the ball within the 18-yard box. A moment later, the ball was between the posts. The Tartans had established a 2-0 lead that seemed impossible to overcome with just over 23 minutes to go.

Having finished their season with a two-goal loss to the Tartans, the Spartans look on to next year, as is often the mantra in Cleveland, Ohio.

The team struggled together, and some younger players are beginning to show their capabilities on the field. Leading scorer for the year, fourth-year forward Joshua Prosser, has seen his last day as a Spartan soccer player, but others hope to fill the void he will leave. It will be exciting to find out whether next year’s season will be an improvement or just another continuing struggle.