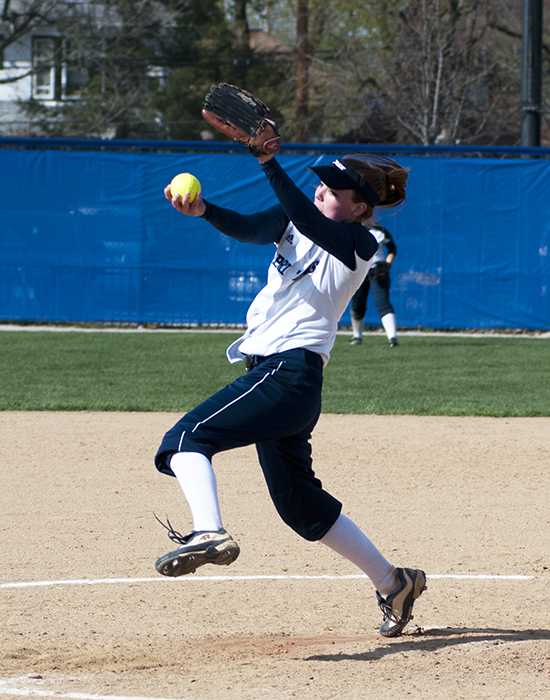 Sophomore pitcher Rebecca Taylor has opened her second season as a Spartan in impressive form with an ERA of 1.17 in two games and a remarkable 23 strikeouts in two games.

After one run in two games, sluggers explode in 11-0 victory

After sitting idle for two days due to inclement weather in North Carolina, the Case Western Reserve University softball team returned to action with a split during an abbreviated Methodist College Early Bird Tournament on Sunday at Lamon Street Park. The Spartans were blanked 9-0 in six innings by Lynchburg College, but rebounded with an 11-0 victory in five innings versus Stevenson University on Sunday afternoon. Three days earlier on Thursday the Spartans lost to host Methodist 2-1.

The Spartans move to 1-2 for the season and will return home to Ohio until the National Training Center Games on March 8-9 in Clermont, FL.

In game one, Lynchburg (2-1) invoked the varsity run rule as the Spartans lost their second-straight game to open the season with a combined one run scored.

Freshman pitcher Rebecca Molnar made her collegiate debut on the mound and was the victim of six Spartan errors. Overall, the rookie right-hander went all six innings and allowed two earned runs.

At the plate, sophomore second baseman Molly O’Brien went 3-for-3 with a pair of singles and a triple. Freshman first baseman Erin Dreger was 2-for-3 as the Spartans collected a total of five hits.

In game two, the Spartan bats awoke to the tune of 13 hits, seven of which were for extra bases.

After a 1-2-3 first inning, the Spartans broke through with three runs in the second thanks to RBI doubles by sophomore pitcher Rebecca Taylor and junior catcher Amy Taylor as well as a sacrifice fly by sophomore left fielder Ashley Parello.

Case added three more in the third with an RBI double from Dreger and a two-run double by Amy Taylor before putting the game out of reach with four in the fourth. Sophomore right fielder Gena Roberts keyed the inning with a two-run double of her own.

O’Brien added the icing on the cake with an RBI triple in the top of the fifth, and the varsity run rule came into effect in the bottom of the frame.

On the mound, Rebecca Taylor was dazzling with five shutout innings of two-hit ball, allowing two hits and no walks, while matching a career high with 12 strikeouts.

Case will play four games in two days at the NTC Games, beginning with a 1 p.m. matchup with Moravian College on Friday, Mar. 8.

After the two-day trip to Clermont, the Spartans will head to Altamonte Springs for the 2013 University Athletic Association Championship on Mar. 12-16.