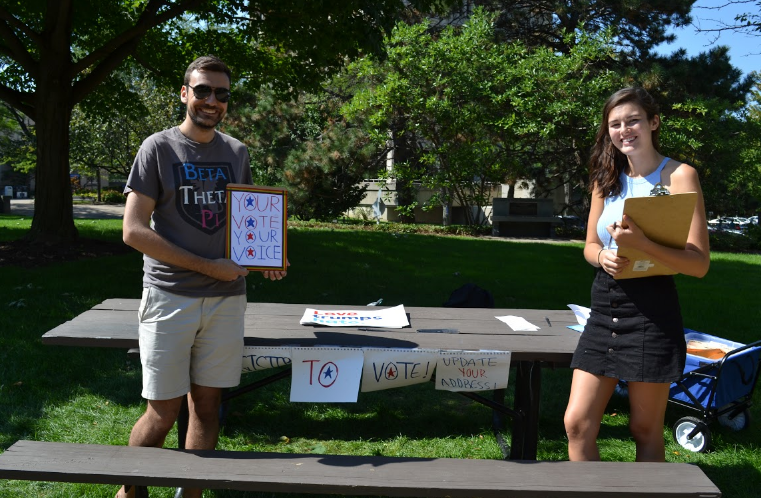 Members from Spartans for Hillary are promoting voter registration everywhere on campus. Their campaign will last until noon on October 11, the last day to register in Ohio.

With one of the most controversial presidential elections in history coming up in less than two months, getting young people to register to vote is at the forefront of many people’s minds.

Paying special attention to registering students and, really, anyone on campus, to vote, is one of the primary missions of one of Case Western Reserve University’s political clubs, Spartans for Hillary.

At least one person takes up a post at a bench near the entrance to the Main Quad every day. Multiple students with clipboards and voter registration forms can also be found walking around campus every single day. The voter registration efforts will last until noon on Oct. 11, the last day to register in Ohio.

Since the start of the club’s registration campaign during late August, the president of Spartans for Hillary, third-year student Monica Windholtz, estimates that the club has registered well over 400 people to vote.

“This is by far the most polarizing election I think we’ve experienced, certainly in my lifetime,” said Windholtz. “I’m quite certain a woman’s right to choose, marriage equality, LGBT rights in general, constitutional criminal law and America’s role as a respected world power are all at stake.”

Ohio’s status as a swing state, a state that can sway the outcome of the presidential election because it goes back and forth between voting Democratic and Republican, makes it all the more important for people not only to register to vote, but to register to vote using their current address on campus.

Windholtz said that registering to vote in the United States “can be a bit complicated,” so the volunteers hope to make that process easier. All one must do is fill out a short form which is then taken to the Cuyahoga Board of Elections. Then, the people who filled out the forms are officially registered as Ohio voters.

“…This current election is very unique in the sense that it involves [both] a woman and an outsider to the political world, and [I] am excited that Hillary has a relatively strong lead in most polls,” first-year Spartans for Hillary member Lauren Walters said.

“I’m a big Hillary supporter and wanted to get involved with whatever campus campaign work there was,” first-year Spartans for Hillary member Spencer McClung said.

Although many of the students who register people to vote belong to Spartans for Hillary, McClung said the members will “register anyone, regardless of political views or affiliations…. I see it as a pretty big civic duty to vote.”

“I do not agree with what you say, but I will defend to the death your right to say it” is one of Windholtz’s favorite quotes. This seems to sum up many volunteers’ views.

“I think utilizing our American right to vote is extremely important and everyone should have the opportunity,” Walters said. “I’d rather people use their right to vote than have my preferred candidate win because people weren’t able to [or] chose not to vote.”

“Everyone has the chance this election to make their vote, and their opinion, matter,” Windholtz said.