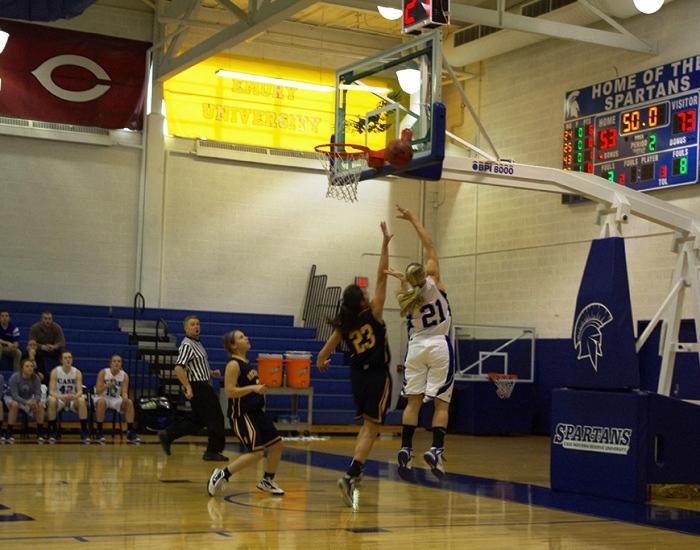 Women fall to Emory 75-57, Rochester 75-55
Scoring droughts continue to hurt the Spartans after key dry streaks in the Case Western Reserve University’s women’s basketball team’s home conference opening weekend led to a pair of losses.  In the team’s first game of the weekend against No. 20 Emory University, a streaky second half allowed the Eagles (14-2, 4-1) to rebound from a 14-point deficit to win by 18, 75-57.  A slow start against the University of Rochester (12-4, 4-1) doomed the Spartans (10-6, 2-3) on Sunday, as they were unable to bounce back from a 14-point first half in their 75-55 loss.

On Friday against the ranked Eagles, the Spartans started hot, matching the visitors for the first 10 minutes to the tune of 14-12.  Six free throws in a row, two by senior guard Erica Iafelice and four by Evy Iacono, jump-started a 15-3 run.  Iacono would add two more points and Iafelice would hit two more free throws and a three pointer to give the Spartans a 14-point lead with just over five minutes remaining in the first half.

Back-to-back three pointers by Emory’s Selena Castillo cut into the Spartans lead, and CWRU scored just two points in the final five minutes, allowing the visitors to crawl back to within seven at the half.

The Spartans would bounce back after the half with Iacono and sophomore forward Berit Eppard scoring the second half’s first four points.

The Eagles would get back within five after a three-point play and a three-point jump shot to the tune of 39-34 with 17:55 left to play.  Eppard would hit another jump shot, and sophomore guard Brooke Orcutt would hit a layup to extend the lead back to nine.  The Spartans called a timeout with a 43-34 lead and 17:18 left to play.

After the stoppage of play the Spartans went ice cold, however, scoring just four points over the next 6:45 of play as the Eagles would claim a 50-47 lead.  The Spartans were 2-for-8 during the stretch, but it was the five turnovers that hurt the Spartans the most.  Iacono would hit a jumper to snap the drought, but the Eagles had the momentum and Emory’s Ilene Tsao would hit back-to-back three-point jump shots to break the Spartans’ spirit, giving the visitors a 56-49 lead.

Eppard would score a jump shot to cut the lead to five but that would be the closest the Spartans would get as Emory ran away in the closing minutes.  The Spartans had a chance to get back in the game as Iacono got them within seven with five minutes to play, but Case scored just two points in the final five minutes.

Iacono led the Spartans with 16-points on the evening while Eppard had a career-high 15.  Orcutt had 10-points and a team-high seven rebounds from the bench.

Against the Yellowjackets, the dooming scoreless stretch came in the middle of the first half.  Despite scoring the games first six points and holding a 10-5 lead eight minutes into the game, the Spartans went ice cold for over eight minutes, allowing Rochester to go on a 23-0 run.  Case went 0-for-13 during the streak and had six turnovers.  It wasn’t just an offensive struggle for the Spartans as the defense also allowed the Yellowjackets to hit 61.5 percent of their shots and gave up seven free-throw attempts.

For the game, the Yellowjackets scored 18 points off the Spartans’ 15 turnovers.  Case didn’t score a single point off any Rochester’s nine turnovers.

Headed into the locker room at half down 20-points the Spartans had their work cut out for them.  Luckily the Spartans were much more consistent in the second half, scoring constantly with no drought longer than two-and-a-half minutes.  Unfortunately, the Yellowjackets were going basket-for-basket with the home team.  Rochester would extend their lead to as many as 32 in the second half but a strong finish by the Spartans ended the game down 20, 75-55.

After scoring just three points against the Eagles, senior Emily Mueller led the Spartans against Rochester with 12 points and four rebounds.  Eppard ended an impressive weekend with 11 more points and 7 rebounds.  Iafelice led the team in both rebounds and assists with eight each.  Iafelice is tops in the UAA for assists and is fifth nationally with 5.8 per game.

The women will return to action again this weekend in the Horsburgh Gymnasium for the annual Throwback Weekend.  The Spartans will take on the University of Chicago (6-10, 2-3) on Friday night at 6 p.m. donning yellow uniforms to commemorate Flora Stone Mather College.  Case will also take on No. 7 Washington University (14-2, 4-1) on Sunday tipoff is at 1 p.m.