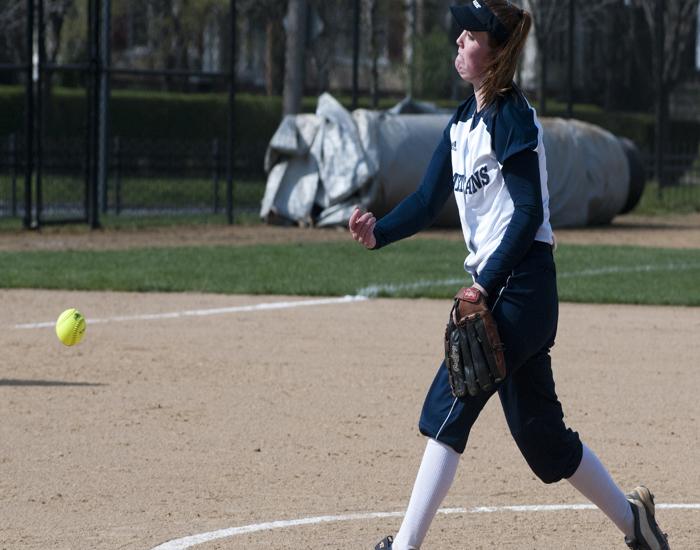 A walkoff single on by Makenzie Lein gave the Spartans the win over visiting Heidelberg University. The Case Western Reserve University softball team split with the Student Princes, taking the first game 3-2 and dropping the second 9-1.

The split moves the Spartans to 18-11 overall; they are one win away from matching last year’s win total with 14 games to play. The win also puts the Spartans four wins away from a clinching a winning season. Heidelberg moves to 11-9 overall.

The first game of the doubleheader got a jumpstart in the first inning when leadoff hitter Molly O’Brien singled and took advantage of a throwing error to round third. Coming off honors as the UAA Hitter of the Week, Gena Roberts continued her red-hot rookie season with her fourth home run of the season, giving the Spartans a 2-0 lead.

Freshman pitcher Rebecca Taylor then took over, keeping the visitors hitless until the fifth inning as part of her eight-inning four-hitter. Taylor racked up nine strikeouts and improved to 13-9 on the season.

The Student Princes racked up a pair of runs in the sixth to tie things up, but the Spartans would continue their stellar defensive performance. After stranding the game-winning run on second in the seventh inning, the Spartans got their offensive boost. Roberts, who got on base with a single, advanced thanks to senior Lauren Wolz’s single. An error pushed Roberts to third, where Lein cleaned up with a walkoff single.

The nightcap didn’t go as planned for the Spartans; the ‘Berg got on the board early and often, putting up seven runs in the first two innings. The Student Princes scored in the first inning off of rookie pitcher Christina Hunger. A single by Heidelberg followed by a bunt and a fielder’s choice put the home team down a run. The second inning is when things got ugly for the Spartans. A pair of walks were matched up with three doubles and two errors to cost the Spartans six crucial runs. Head coach Josie Henry opted to pull Hunger and insert Taylor, who had pitched a complete game earlier in the evening.

With their backs against the wall and the run-rule a run away, the Spartans were able to buckle down defensively and hold the Student Princes for the next two innings.

The Spartans were able to get a run back in the fourth when senior Lauren Wolz knocked a double down the left field line. Junior Chelsea Lasky came in to pinch run and quickly got to third on a wild pitch. Lein followed up Lasky with a walk and the Spartans got on the board as they executed a double steal.

Mistakes continued to hurt the Spartans in the fifth inning as Heidelberg grabbed the two runs they needed to win on a wild throw, giving them a 9-1 lead. Freshman Hillary Bunnelle came to the mound and played out the inning with three outs, allowing just a single. The appearance was only Bunnelle’s fourth of the season, but she’s proven herself as a valuable reliever for the Spartan pitching staff. Hunger picked up the loss and fell to 5-2 on the year.

In a do-or-die fifth inning the Spartans were unable to get on base and the Student Princes picked up the split.

The Spartans will be back at Mather Field today, April 6, against Oberlin College at 3:30 p.m. for a double header.