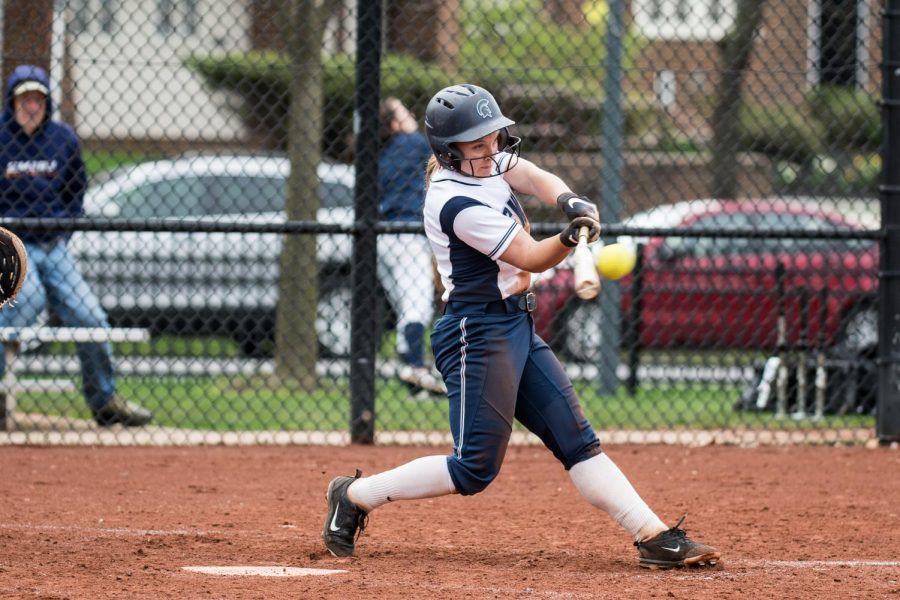 Nicole Doyle connects with a pitch. Doyle was honored last Saturday for the softball team’s Senior Day. In her time on the team, Doyle has helped the Spartans go 97-60 over the last four seasons.

Doyle has been an exceptional shortstop for the Spartans. During her second year on the team, she was named to the University Athletic Association (UAA) First Team. She also earned a Second Team Award last year.

CWRU, despite the festivities, had an important weekend in conference play. They battled closely in every game, but only came away with one victory.

The first game against Emory went into extra innings. Emory scored early, taking a 2-0 lead in the second inning. Both teams scored a run in the fifth to hold CWRU’s deficit to two runs. Then, in the bottom of the seventh, the Spartans tied the game after third-year pinch runner Caitlin Smith stole home and second-year outfielder Arisa Cleaveland drove in second-year designated player Sarah Miller to send the game into extra innings. However, CWRU gave up a grand slam in the top of the ninth that capped off the Emory win, 7-3.

The Spartans would love to redo the second game. Things were looking great through six innings. CWRU jumped out to a 7-1 lead, including a solo home run from third-year first baseman Nicole Carty as part of a three-run sixth inning. The game fell apart for the Spartans in the seventh. Emory scored eight runs to take a 9-7 lead. The Spartans went scoreless in the bottom half of the inning, losing both games on Saturday.

Because of a weather cancellation Friday, the two teams played the rest of the series early on Easter Sunday. Once again, CWRU lost despite scoring seven runs. Emory won the first game Sunday morning 10-7. Doyle had a solid game at the plate. She went 3-5 with two RBIs.

Finally, CWRU secured a win, 3-2, in the final game of the weekend as both teams’ bats cooled off a bit. Emory scored quickly in the top of the first, but Carty responded with a two-run home run in the bottom of the first to give CWRU a 2-1 lead. Third-year third baseman Melissa Cuellar extended the lead to two runs with an RBI single in the bottom of the sixth. Emory scored one run in the seventh but was stifled after that. Second-year pitcher Sidney Brannam earned her ninth win of the season in the contest.

The Spartans travel to St. Louis for their final UAA series of the year against Washington University in St. Louis on April 26 and 27.