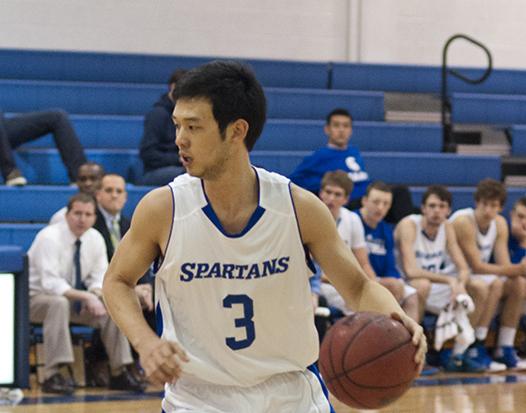 The Case Western Reserve University men’s basketball team will host New York University and Brandeis University this weekend with a chance to jump up the University Athletic Association standings.  The men will tipoff the weekend on Friday night, Feb. 8, at 8 p.m. in the Horsburgh gymnasium against the Violets.  Two days later, on Sunday at noon, they’ll host the second place Judges (15-5, 6-3).

The men (9-11, 2-7) currently sit with a one game lead over Carnegie Mellon University in seventh place while the visiting Violets (13-7, 3-6) are just ahead in sixth place.  A win over the visitors would give the Spartans at least a share of sixth place depending on the results of Sunday’s game against the Judges.

The Violets come to Cleveland off a high and low weekend.  New York toppled then No. 1 University of Rochester on Friday, Feb. 1, then the Violets dropped a game to Emory University at home on Sunday, 74-69.  Before that, however, the Violets lost four straight.

The Violets lead the all-time series against CWRU 30-10 and have won the past four straight.  In the two teams’ last meeting, New York pulled away in the second half on the way to a 75-58 victory in the Jerome S. Coles Center.  Dane McLoughin and Austin Fowler each had 11 for the Spartans, but they were outmatched by the Violets’ Carl Yaffe and Devin Karch who tallied 17.

The Spartans have a chance to get a game back against a Violets team that has been inconsistent all season.  When New York wins, they win big, but when they lose the game all but gets away from them.  The Violets have lost five of the past six games and with the closest being five points with an average of 13.4.  Even when they played the No. 1 ranked Yellowjackets, the game wasn’t close as New York ran away to a 14-point win.

In order to keep it close, the Spartans will rely on their top scorers, Austin Fowler and Dane McLoughlin.  Fowler, a senior forward, is sixth in the UAA in scoring with 15.5 points per game.  He’s also an exceptional rebounder with 7.9 rebounds per game, second in the UAA.  While Fowler dominates inside, it is 6’6” forward McLoughlin strikes from afar.  McLoughlin leads the country in three-point shooting with an astonishing rate of 57.1% from behind the arc.  He’s also deadly from inside with a field-goal percentage of 55.2%, fifth in the UAA.

The biggest stat line for the hosts is their ability to shut down opposing offenses inside.  Case leads Division III with 6.3 blocks per game, nearly twice the next UAA team.  Julien Person and David Thompson are second and third in the UAA in blocked shots with 1.8 and 1.7 per game, respectively.  Meanwhile, sophomore Brian Klements is fifth with 0.9 and McLoughlin and Fowler are tied for sixth with 0.8.

This should be a tight matchup across the board as the two teams mirror each other incredibly well.  CWRU averages slightly more points than New York, 70.6-68.2 per game, but the Violets have allowed fewer overall, 66.3-73.4.  The question for the Spartans will be which team will they face on Sunday, the Violets who beat the No. 1 team in the nation by 15 or the team that’s lost five of the past six by an average 13.4 points

One area that New York has the slight edge is in rebounding as they have a margin of +1.4 per game while CWRU limps in with a -3.0 figure.  However, CWRU has been exceptional on offense with 34.1 rebounds per game, fourth in the UAA, while New York matches that number and position on the defensive side.