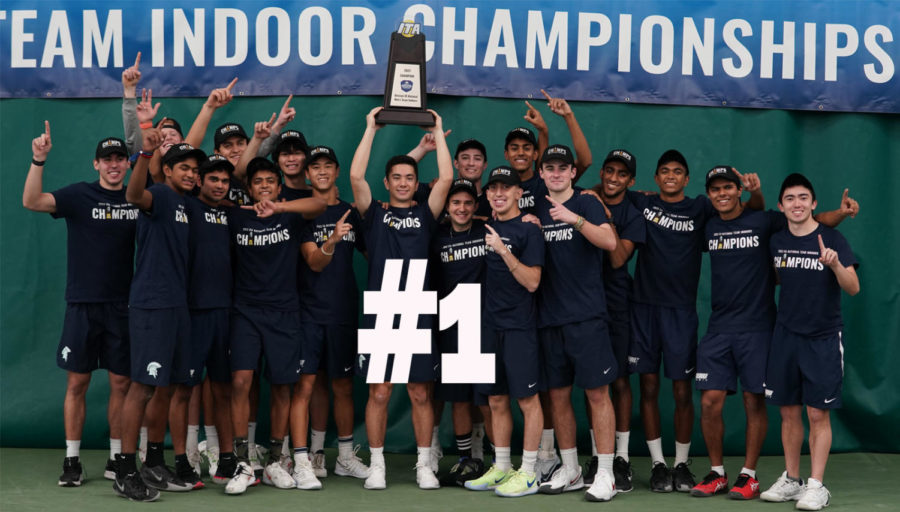 The men's tennis team raises the ITA championship trophy after defeating the University of Chicago 5-1.

The Case Western Reserve University men’s tennis team entered the Intercollegiate Tennis Association (ITA) Indoor National Championship with high expectations. Not only were they the No. 1 seed in the tournament, which consisted of perennial Division III powerhouse Emory University and the Claremont Colleges’ highly ranked Claremont-Mudd-Scripps team, but they had also boasted the No. 1 national recruiting class in 2021, with multiple four-star recruits and one five-star recruit. Meeting these high hopes, the men’s tennis team delivered stunning performances in both their doubles and singles matches throughout the three-day tournament.

The Spartans decimated eighth-seed Gustavus Adolphus College with an 8-1 victory. Then, CWRU swept the singles matches against Adolphus, with hard-fought victories from first-year phenom Ansh Shah in third singles and fourth-year Chaitanya Aduru in fifth singles. Third-year James Hopper, the No. 6 singles player in Division III, defeated the No. 33 singles player in first singles after effortlessly winning both sets 6-0 and 6-0. The Gusties’ only point came from a 8-6 win in the second doubles match against second-years Vishwa Aduru and Sahil Dayal.

The Spartans found similarly successful results in the semifinals after thrashing the Trinity University Tigers 8-1. However, the overall score does not do justice to the Tiger’s tenacious fight against the Spartans, especially in the singles matches. Though every doubles match resulted in 8-4 wins for the Spartans, the singles matches saw Hopper, first singles, fall against the No. 7 singles player in the country in the tiebreaker, 10-9. Meanwhile, second singles Vishwa Aduru, ranked No. 32, faced stiff competition against Hao Nyugen, ranked No. 29, with his singles match being decided in a close tiebreaker set favoring Aduru 1-0. Chaitanya Aduru did not allow his opponent to win more than two games in both sets of the fifth singles match. These dominating performances helped the Spartans secure a ticket to the ITA Indoor National Championship Finals against the University of Chicago Maroons.

With home-court advantage and momentum from their victories, the Spartans entered the finals with an utter determination to raise the elusive ITA Indoor National Championship trophy.

“I think it’s important to have nerves in such an important match,” said Shah regarding his mentality towards the championship round.

On the other hand, veteran Diego Maza displayed a calmer attitude. “It was more of a feeling of excitement rather than nerves. I think we all knew what we were capable of and were ready to show it out on [the] court.”

According to Shah, Head Coach Todd Wojtkowski and the veterans emphasized that the last match is only “a match against Chicago, nothing more.”

With doubles matches commencing the finals, Chaitanya Aduru and third-year Michael Sutanto handed the Maroons their first defeat, 8-2. Shortly after, the Spartans had a commanding 3-0 overall lead following solid wins from first doubles, Hopper and Jonathan Powell, and second doubles, Vishwa Aduru and Dayal. Needing only two more wins to become champions, the Spartans displayed their prowess under pressure in the singles matches. The two wins required came from Shah in third singles and Powell in sixth singles.

“It felt surreal,” said Shah following his victory, which placed the Spartans only one win away from becoming champions. “The main goal in any match is to contribute to the team … and to be able to do that in the national finals was an experience I’ll never forget.”

Though the Spartans fittingly ended their flawless tournament performance with a 5-1 win over the University of Chicago Maroons, they know that there is still work to be done in order to take home the trophy at the 2022 NCAA Division III Men’s Tennis Championship later this spring.