Spartans on the Warpath 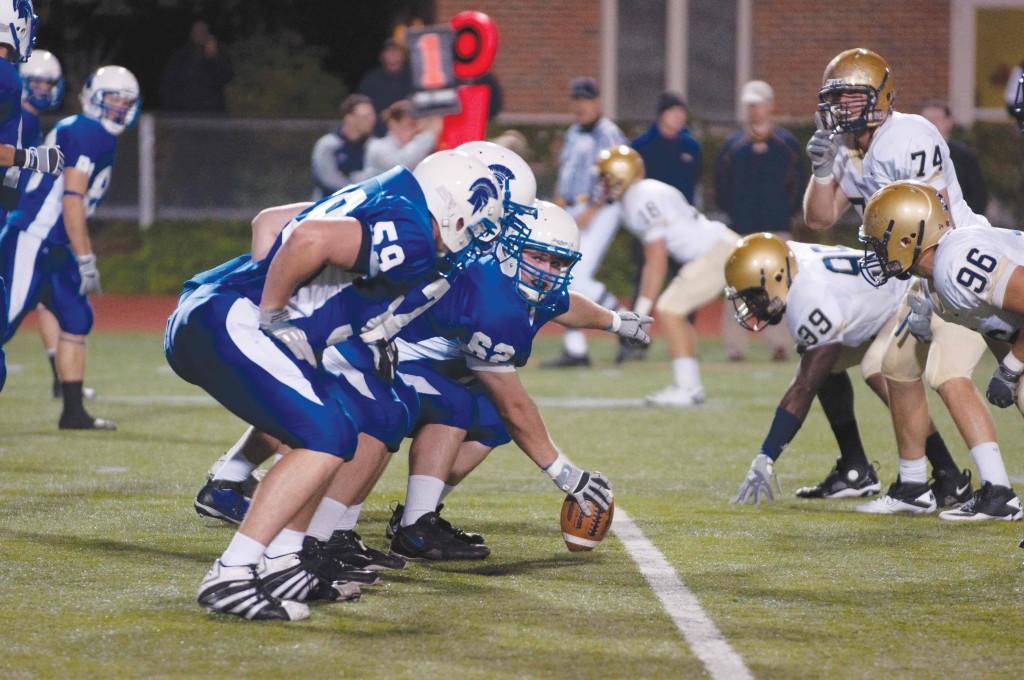 The Case Western Reserve University football team began last season in a state of uncertainty.  For the first time in five years, the Spartans didn’t have a clear-cut starting quarterback heading into the season opener.  However, when the smoke cleared, Erik Olson, a senior transfer from Division II California University of Pennsylvania, was named the team’s starter.  Behind their new quarterback, the Spartans ran off to a 9-1 overall record, finishing 3-0 in the University Athletic Association and earning their fourth conference title in the past five years.

Entering last season as part of a battle for the starting position, Olson didn’t have the opportunity to play with the first team offense exclusively.  In the first few games, he showed some rust as he tried to catch up to the level of play of the Spartans’ opponents.  Olson started off with a solid game against nearby rival John Carroll University.  With just 18 attempts, Olson connected on 61.1 percent of his passes for 95 yards with an interception.  In the team’s next game, and only loss, Olson was forced to throw more, as the Spartans played from behind.  He went 18-for-35 with two interceptions and the University of Rochester won 17-7.

After a tough pair of opening games, the Spartan signal caller hit his stride, throwing for eight touchdowns over the next five games with just three interceptions.

The conference season started on a tough note for Olson, as the Spartans managed just 95 yards in the air on 10-for-17 passing in a defensive 6-0 win against the University of Chicago.  He finished out the season strong, leading the Spartans to the conference title, throwing for a combined 30-for-51 and three touchdowns against Washington University and Carnegie Mellon University with no interceptions.

If 2011 was a year of uncertainty, the one thing that the Spartans know for sure is that they don’t have to worry about the running back position after breakout seasons by All-UAA duo Kenny Riordan and Manny Sicre.

Riordan, a junior, was named the starter for all 10 games in his sophomore year and showed that he was the man for the job, running away to first-team All-UAA honors with 556 yards and two touchdowns last season.  Returning after an explosive rookie campaign is Sicre, who earned the 2011 UAA Rookie of the Year honors last season.  Sicre led the team with 638 yards and finished with six touchdowns, five rushing and one receiving.  He was one of the key players in the Spartans’ opening day victoriy over John Carroll last season, rushing for 172 yards with a 75-yard touchdown.  He was also named the OhioCollegeFootball.com Division III Rookie of the Year.

The big question for the Spartans’ offense this season will be the first layer of protection on the line.  The Spartans graduated three players, Tony Opperman, Michael Allen, and Brandon Rolle, off the line from last season, all either on center or the crucial left side.  The right side, however, remains intact, as senior Cullen Dolan returns at tackle and junior Jake Abbott comes back at guard.  Looking to fill the remaining three slots will be senior Andrew Berkebile and juniors Shay Baker and Garrett Hartig.

Berkebile started a trio of games last season and looks to start at center while also being capable of moving to guard.  Hartig started twice and will probably fall into the guard position.  Baker switched sides of the ball last season from linebacker and played three games at guard last season.

Key players on the bench that will likely see playing time will be senior Michael Koopman and sophomore Jon Allen, the younger brother of Michael Allen.

The Spartans allowed 35 sacks last season in 10 games, 14 more than the next highest UAA team, Carnegie Mellon.  Olson isn’t the most mobile quarterback in the pocket and needs time to throw, although sometimes he takes a little too much time.  The key for the Spartans to continue playing at a play-off and conference championship-caliber level will be giving the offense time to run its plays.  In the four games that were decided by a touchdown or less, as well as their 10-point loss, the Spartans allowed 24 sacks for 116 yards.  While the Spartans may not be losing many yards from sacks, the ball is still being moved the wrong way, and if they give up seven sacks like they did in their overtime victory against the College of Wooster, they might end up on the wrong side of the score line.

Out wide, the Spartans will be missing graduated starters: tight end Bryce Coleman and wide receiver Bryan Metlesitz.  Playing along those two seniors last season was sophomore Sean Lapcevic, who had a breakout rookie season.  Lapcevic started all 10 games last season and finished as the team’s number two receiver behind Metlesitz.  He finished with 36 receptions for 429 yards and a touchdown.  Those totals were good enough for third in the UAA in catches and fourth in yards.

Lining up opposite Lapcevic will likely be senior Brian Rice who had his season end prematurely in October with an injury.  In his limited action, he finished with eight catches for 142 yards including a crucial 33-yard touchdown in the team’s 17-10 win over Allegheny College.

Also returning from season ending injuries are upperclassmen Zachary Scott and Peter Vincente.  Scott, a senior, saw action in three games last year, catching two passes for 25 yards against Rochester. Vincente, a junior, did not play in 2011 but appeared in a pair of varsity games as a freshman.

On the other side of the ball, the Spartans finished the season with one of the best performances in school history.  Case finished seventh in the nation in rushing defense, allowing 75.7 yards per game, 12th in scoring defense with 12.9 points per game, and fourth in red zone efficiency with 52 percent of opposing offensive possession ending in a touchdown.  The program also starred the UAA Defensive Player of the Year, Dale English, two D3Football.com All-North Region honorees, and seven of the 13 defensive first-team All-UAA selections.  With 10 seniors returning across the board, the Spartans have the experience to replace their graduated compatriots and the youth to follow up 2011 with another historic season.

On the front line for Case will be first-team All-UAA seniors Adam Watson and Michael Harris.  Watson, a defensive end, was second on the team with 6.5 sacks and finished with 56 tackles, 10 of which were for a loss, as well as a forced fumble and a separate recovery.  Playing the role of nose tackle, Harris has started for three years and finished last season with 41 tackles and 1.5 sacks at the center of the line.

Looking to battle for the other two starting positions are senior letter-winners Collin Desens and Michael Sirosky, in addition to junior Brandon Bryant.  The quartet of sophomores in Mike Streicher, Mike Valleriano, Derek Porto, and Jack Behrend will also compete for playing time.

The linebacking core will miss Adams in the upcoming fall, but will return with senior starter Wade Self and senior Kevin Nossem.  Self started nine games last season, missing one due to injury.  He finished third on the team in tackles and finished with a sack and a pair of forced fumbles.  Self received an All-UAA Honorable Mention for his play.

Nossem, a second-team All-UAA pick, appeared in all 10 games behind Adams, where he finished fourth on the team with 64 tackles and three interceptions.

Playing the hero position on the outside will be first-team All-UAA senior Ryan Ferguson, who moved inside after a season-ending injury to red shirt senior Michael Fioramonti.  Ferguson took to the position with ease, finishing first on the team with 95 tackles. He was the UAA Defensive Player of the Week after going off on John Carroll in the season opener with nine tackles and a fumble and an interception return for touchdowns.

Fioramonti returns from his injury after having an exceptional 2010 season, which he finished with 63 tackles. He was named to the All-UAA second team.

In the backfield, Case returns three starters including senior Dan Calabrese, who finished last season with a number of accolades.  Playing safety, Calabrese finished the season as the UAA Special Teams Player of the Year, a member of the first-team All-UAA team, and the D3Football.com All-North Region team member at defensive back.  He finished last season with 46 tackles, a team-leading six interceptions, 10 passes defended, and a forced fumble.  Calabrese also scored thrice, two times on interception returns and once on a punt return.

Roby saw action in just two games before his season was cut short.  Roby will likely see action in the backfield as well as at the cornerback position.

Returning at cornerback will be senior Cary Dieter who earned first-team All-UAA honors with 41 tackles and five pass defenses.The rest of the secondary will see letter-winners Brandon Flick, a senior corner back, and junior safety Jacob Lafleur compete for playing time and a starting spot.

Special teams saw the departure of its starting kicker for the second straight year and will look to replace All-UAA kicker Dan Vasil.  The starting position looks to be a competition between former All-UAA goalkeeper for the Spartan soccer team Ben Yabrow and a trio of incoming freshman.

Olson will return as the team’s punter where he averaged 36.8 yards last season.