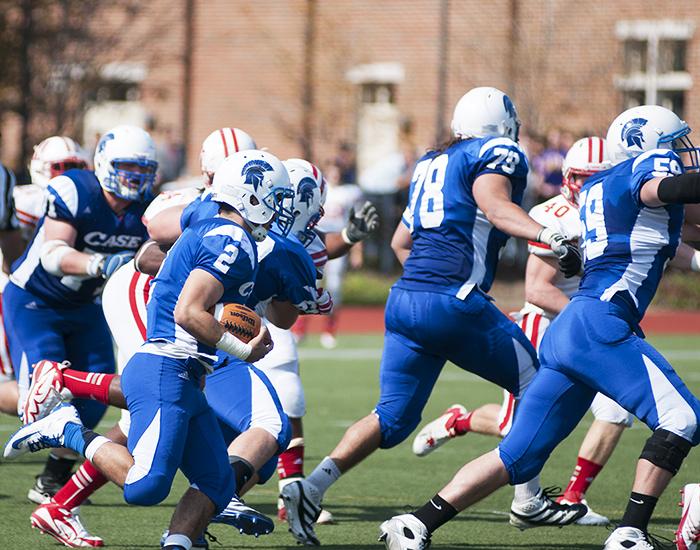 On a cold and chilly Saturday, the Case Western Reserve University football team began its title defense in the University Athletic Association. The offense came out firing, scoring 21 unanswered points during a four minute stretch of the second quarter en route to a 28-15 victory against conference rival University of Chicago on the afternoon of Oct. 27 at Stagg Field in Chicago, Ill.

The Spartans, winners of four of the last five league titles, improved to 5-3 overall and 1-0 in the conference while the Maroons dropped to 4-4 overall and 0-1 in the UAA.

The Spartans’ opening possession resulted in a punt into Chicago territory, and the Maroon offense took advantage of the field position. A 13-play, 71-yard drive, capitalized by Zack Ross-Nash’s 20 yards running on five attempts, resulted in a one-yard touchdown run by fullback Tom Brutofsky at the 6:32 mark of the first quarter. The extra point attempted by kicker Ben Cheaney was blocked by Spartan junior safety Jacob LaFleur and the score remained 6-0.

After the Maroons’ scoring drive, Case drove 12 plays and 68 yards into the red zone, but Chicago put a halt on the drive when cornerback Vincent Beltrano intercepted a pass by quarterback Erik Olson in the end zone. However, the Spartan defense returned the favor as senior cornerback Cary Dieter recorded his first career interception at the Chicago 22-yard line with 14:51 left in the second quarter.

The Spartan offense then took over and reached the five-yard line with a 17-yard run by sophomore quarterback Billy Beecher. Two plays later, Olson hit freshman wide receiver Bryan Erb for a two-yard touchdown pass. Freshman kicker Won Kun Park hit the extra point, and the Spartans took the lead 7-6. On the next drive, the special teams came into play as a fake punt attempt by Chicago was snuffed out at the Chicago 10-yard line by senior linebackers Wade Self and Kevin Nossem, along with freshman safety Scott Suren.

Several plays later, Beecher found freshman fullback Adam Hochman for a 10-yard touchdown pass. Park hit the point after touchdown to make the score 14-6 with 11:03 left in the second. The next Chicago possession also resulted in a special team mishap. A botched snap on the punt gave the Spartans possession at the Maroon 31. Two plays later, Beecher rushed into the end zone from 11 yards out. Park’s third PAT made the score 21-6 with 9:30 left before halftime.

After several possession changes, the Spartans appeared poised to increase their advantage in the final minutes of the half, but a penalty for a block in the back foiled a would-be 23-yard touchdown pass from Olson to sophomore wide receiver Sean Lapcevic. Still, the visitors went into the locker room with a 21-6 lead.

Chicago’s opening drive of the second half covered 66 yards on 10 plays, but a Spartan defensive stand at the goal line forced the Maroons to settle for a 20-yard field goal by Jeff Sauer with 8:53 remaining in the third quarter. After a punt from each side, the Spartans put the game away with a six-play, 50-yard drive that culminated in an eight-yard touchdown run by sophomore running back Manny Sicre. Park hit his fourth point-after, and the Spartans led 28-9 with 1:42 left in the third. The drive was keyed by a 35-yard pass from quarterback Olson to senior wide receiver Vinny Bell on a 2nd-and-23 play.

Chicago scored once more late in the fourth when quarterback Vincent Cortina hit tight end Brandon Meckelberg for a 31-yard touchdown pass with just 54 seconds left to play. Spartan senior defensive end Adam Watson recorded his third block of the season on the PAT to keep the score at 28-15.

Defensively, Self posted a game-high 12 tackles with a forced fumble after missing last week’s game due to injury. Nossem, Watson, and senior linebacker Ryan Ferguson all totaled seven stops, while Watson recorded game-highs with 4.5 tackles for loss and two sacks.

Chicago was led by Cortina with 261 yards passing on 24 of 43, and Meckelberg with seven catches for 141 yards. Linebacker Ben Wade finished with ten tackles and a sack.

The Spartans will continue defense of their UAA title at home Saturday, Nov. 3 versus Washington University of St. Louis at noon at Case Field.