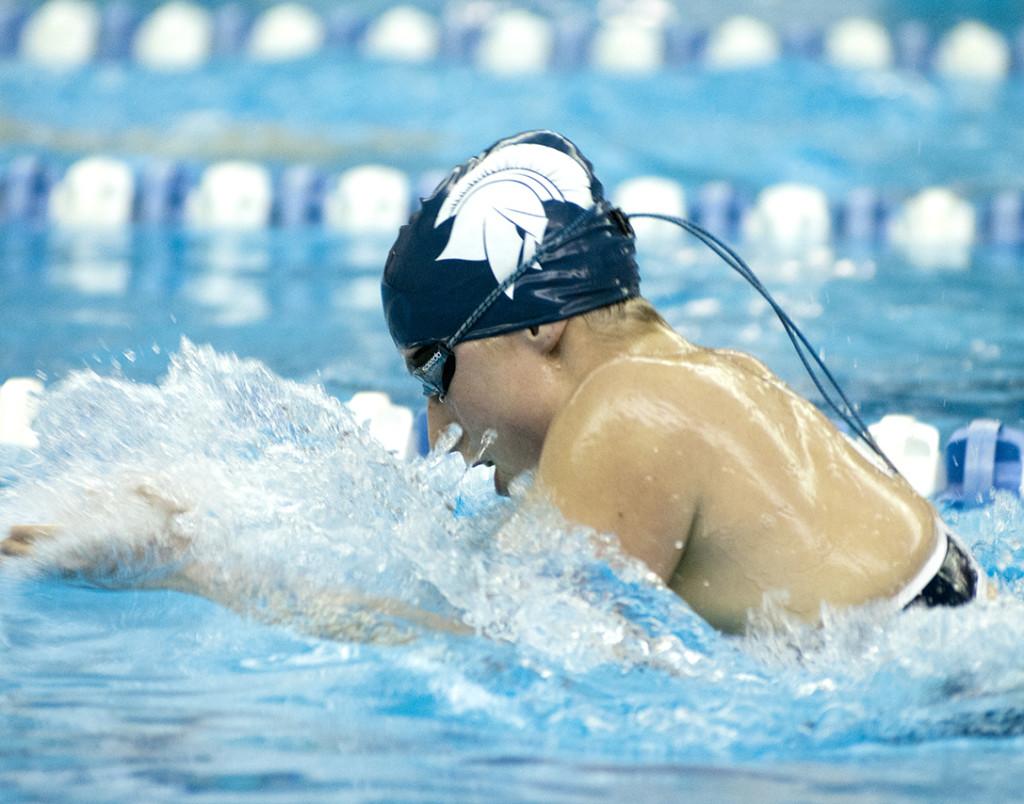 Junior Kathryn Madalena is one of the top seeded women’s swimmers at the UAA Championship. Madalena is seeded 18th in both the 400-yard individual medley and 200-yard backstroke.

The University Athletic Association swimming and diving championship will take place this weekend as Case Western Reserve University travels to the University of Chicago’s Gerald Ratner Athletics Center.  The Spartans travel to Chicago following a pair of late season surges as the men finished 14-2-1 overall, and were undefeated against Division III opponents. Meanwhile, the women finished 8-9 overall, and 4-1 in their last five meets with the sole loss coming by one point to Allegheny College.

The men finished third in 2012 while the women finished seventh.  Emory won both the men’s and women’s conference championships last year.

The No. 16 men enter the 2013 championship up six spots in the most recent College Swimming Coaches Association of America poll.  The men are one of five UAA teams ranked in the poll.  Defending conference champion Emory University is the top conference team at No. 6.  No. 12 Chicago, No. 13 Carnegie Mellon University and No. 14 Washington University are the other men’s teams that are ranked.

The rankings are based solely on how teams would fare in dual meets, rather than in the championship format that will be used at the UAA and NCAA championships.

Eric Haufler is also seeded 12th in the 100-yard butterfly with a seed time of 50.55 seconds

Sophomore Andrew Bollinger is the Spartan men’s highest ranked individual seed with a fifth-place time of 52.05 in the 100-yard backstroke. Sophomore Alex Haufler is also ranked in the top-12 with an eleventh-place seed time of 53.51.

Freshman Aaron Tam is seeded eleventh in the 1,650-yard freestyle with a time of 16 minutes, 48.42 seconds.

Junior Maggie Dillione is seeded second in the 100-yard butterfly with a B-Cut time of 56.25 seconds.  Dillione has also surpassed last year’s selection time for the NCAA Championship and is under a second from the A-Cut of 55.62 seconds.  Dillione is also seeded fifth in the 200-yard butterfly with a time of 2:06.00, good enough for a selection last year and a B-Cut.  The A-cut for the event is 2:02.93.  Dillione is also seeded 12th in the 50-yard freestyle with a time of 24.56.

The Spartan performances this weekend will determine their eligibility for the 2013 NCAA Division III Championship.  That meet will take place Mar. 20-23 in Shenandoah, TX at the Conroe Natatorium.