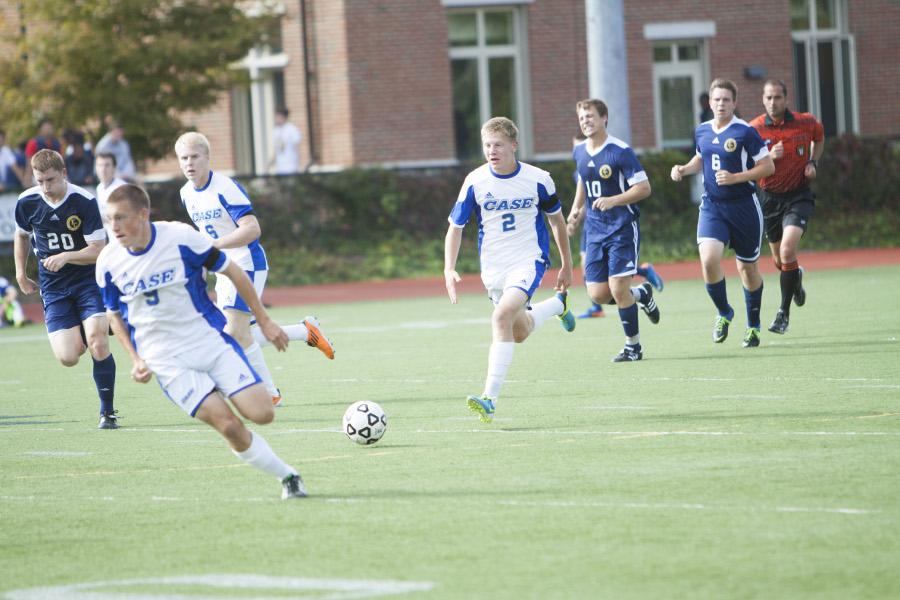 Chris Cvecko who was the hero of Wednesday's game takes the ball up field in this photo from last season. Charlotte Palmer/Observer

What a difference a week makes.

After struggling in opening weekend of games last week, the men’s soccer team turned around and won both of their games at the Fred Meyers Adidas Invitational hosted by Ohio Wesleyan, and then pulled off a wet victory in their home opener on Wednesday night. The Spartans now stand at 3-1-1 on the season.

Four different Spartans sent shots between the posts in the opening game of the Fred Meyer tournament last Friday night against Guilford College. Their combined efforts lifted the Spartans to their first victory of season.

The Spartans opened up the floodgates early, taking advantage of their corner kick opportunity in the ninth minute. Sophomore Joshua Prosser sent in the high ball, which midfielder Chris Cvecko directed into the box with a strong header and freshman forward Michael Balog buried into the back of the net to put the Spartans up 1-0.

Less than 14 minutes later, the Spartans added another as Matthew Zembas beat the keeper for his second goal of the season with the help of Balog, who connected with Zembas with a strong cross from the goal line.

The Spartans were largely subdued in the opening of the second half but then found space between the posts to bury insurance goals within mere minutes of each other.
Prosser blasted in a goal of his own from the middle of the box with 75:37 on the clock off an assist from Logan Glosser, and midfielder Slater Jameson put the final nail in the Guilford College in the 77th when he added an unassisted goal of his own. The Spartans dominated offensively holding a 21-11 shot advantage and took nine more corner kicks over the course of the match.

Defensively, sophomore Thomas Nolan made three strong saves to earn the win in his first career match. Nolan was helped on the backline by Ryan Meyer who put in the first of two stellar performances over the weekend.

In the second game of the weekend, the Spartans bested the University of Mary Washington with a 2-0 final. Case was again offensively lead by Balog, who netted his second goal of the season, as well as senior defender Taylor Fletcher who found the back of the net for the second time in his collegiate career.

Neither side could get past the opposing defense through the entire first half and the draw continued until the 52nd minute of play, when Fletcher broke the tie by collecting and burying the deflection of the Mary Washington keeper following a corner kick taken by Prosser. Balog expanded the Spartans’ lead with an insurance goal in the 77th minute, giving the Spartans a 2-0 lead and the eventual second win in as many days.

Freshman keeper Calvin Boyle worked the shutout in his first career start and stopped both shots on goal by Mary Washington, again with the defensive help of Meyer, whose stellar play earned him the Dick Gauthier Award as tournament MVP. Balog, Cvecko and senior midfielder Bairdy Hansen were also named to the all-tournament team.
Cvecko lead the Spartans in the the wet game that played out on DiSanto Field Wednesday night against cross-town rival Baldwin Wallace University. Through a scoreless first half, the teams battled both the other team and the weather as a storm brewed over Cleveland.

After a tough battle on both sides, the Spartans were finally able to take advantage of the slippery playing surface as Cvecko received a well placed cross from junior Zembas and fired a shot through the hands of the Yellow Jackets goalkeeper.

The Spartans were able to hold off the other Baldwin Wallace advances and Boyle worked his second consecutive shutout with three spectacular saves in the tough conditions.

The Spartans will stay at home this weekend and look to continue on the winning streak by facing off against Capital at DiSanto Field at 3:30 p.m. on Sunday afternoon.