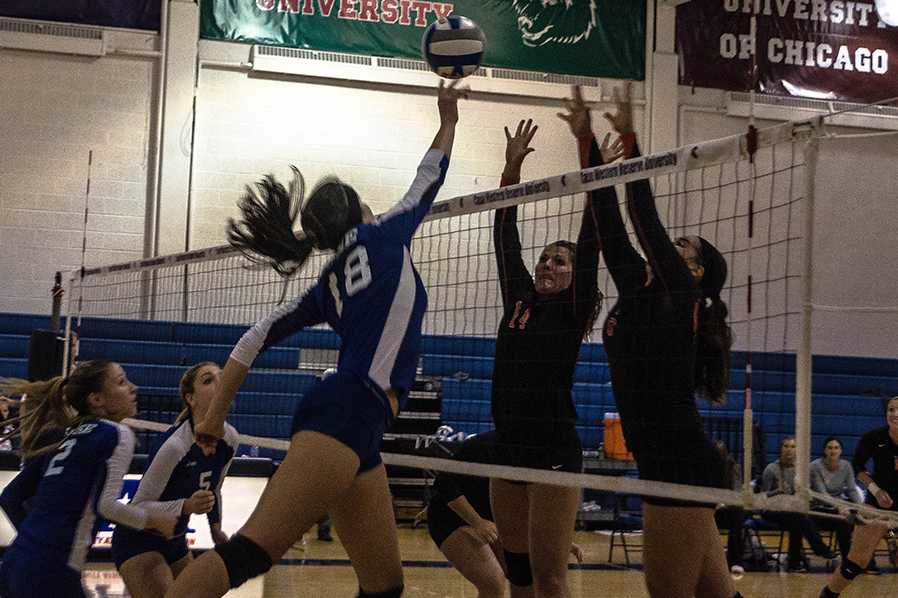 The Case Western Reserve University volleyball team beat John Carroll University in four sets to open the 15th Annual Marcia French Tournament. The Spartans dominated the first set early to get out to a 6-0 start. The Spartans went on to win the set 25-20.

CWRU fell in the second set with a few long rallies falling on the wrong side of the net. The final score was 15-25 after a long JCU scoring streak. The Spartans got their revenge in the third set, dominating late to end with a score of 25-16.

The final set featured even scoring all the way up until the teams were matched at 9-9. The Blue Streaks then hit their stride, going up by a score of 18-12 until the Spartans rallied to come from behind with a 25-23 victory. Game standouts included Sophomores Natalie Southard, Haley Kauffman and Carolyn Bogart with Katie Best contributing 19 digs on defense.

The Case Western Reserve volleyball team fell to the Buffalo State Bengals on Friday night during their second match of the 15th Annual Marcia French Tournament. The team lost that match two sets to three after a long defensive struggle on both sides of the net. The Spartans opened strong, winning the first set 25-14. Taking advantage of a tired Buffalo State team, the ladies demonstrated hard-hitting offense taking the lead early and not letting go. Sophomore Lauren Gurd contributed some great serving and assists to help lead the Spartans to an easy victory in this set.

The second set was a tougher fight. The Spartans were unable to take the lead at all after the 4-4 tie early and ended up dropping the set 18-25. The third set showed more of the same with CWRU eventually losing the set 13-25.

The Spartans rallied in the fourth set with several critical plays made by Freshman Isabelle Wagner at the net and Sophomore Katie Best in the defensive position to force a fifth set. In this final set, the Spartans again had difficulty overcoming a point deficit in the beginning. Despite aggressive and self-sacrificing play, the ladies were unable to edge out the Bengals and lost the match with a final set score of 12-15.

For day 2 coverage of the Marcia French Tournament, click here