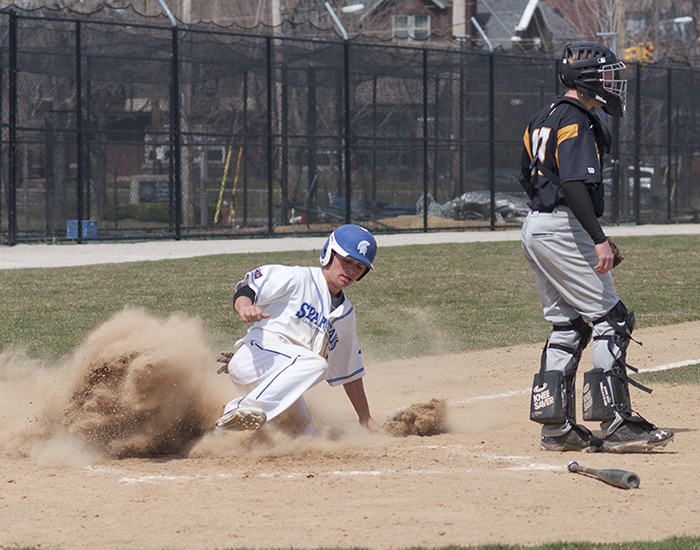 Sophomore centerfielder Will Meador went 4-for-7 in a two-game split against Wooster. Meador picked up two RBIs and three walks in the double header.

Playing at home for the first time in 2013, the Case Western Reserve University baseball team dedicated its brand new scoreboard and split a key regional doubleheader versus The College of Wooster on Sunday, April 7, at Nobby’s Ballpark. The Spartans lost the opener, 9-7, but rebounded to take the nightcap, 5-4.

The Spartans are now 15-7 overall as they open a nine-game home stand.

Prior to the first pitch of game one, the program honored alumnus Nobby Lewandowski for his continued support of Nobby’s Ballpark and his most recent gift of a new scoreboard.

Combined for the day, sophomore outfielder William Meador was 4-for-7 at the plate with three walks and a pair of runs batted-in. Sophomore right fielder Andrew Gronski also drove in two runs during a 4-for-9 day, and junior third baseman Andrew Frey was 3-for-8 with three RBI.

In game one, the Spartans wasted little time in lighting up their new scoreboard as Meador led off with a single, moved to second on a wild pitch, and scored when Gronski ripped a double over the right fielder’s head. Two batters later, senior first baseman Brett Ossola shot a hard infield single to shortstop to plate Gronski.

In the next frame, the Spartans struck again when Meador drilled a two-run single to left to score sophomore left fielder Kerrigan Cain and Frey, who each reached on singles.

Trailing 4-0, Wooster then chipped away at its deficit with single runs in the third, fourth and fifth as Bryan Miller, Craig Day, and Jarrod Mancine all drove in runs. In the sixth, the Fighting Scots scored six times to grab their first lead with Brendon Taylor igniting the rally via an RBI double, and Bryan Miller driving in a pair on a single.

The Spartans were able to score a pair of unearned runs in the eighth thanks to another Ossola RBI single that was followed two batters later by a Frey RBI hit, but a promising ninth inning that started with two on and no out ended with a pair on and yielded just one run.

On the mound, sophomore right-hander Kevin Johnstone took the loss to fall to 2-2. Freshman righty Connor Tagg was effective in relief with 3.1 shutout innings and three strikeouts.

Offensively, Ossola and Meador were each 2-for-4 with a walk and two RBI. Frey was also 2-for-4 with one driven in.

Keenan White (5-0) picked up the win for Wooster with seven innings and five strikeouts. Patrick Boyle pitched the Scots out of a jam in the ninth for his second save.

Jarrod Mancine was 3-for-5 with an RBI for the visitors, while Bryan Miller went 2-for-4 with three RBI.

In game two, both sides went scoreless until the bottom of the third when a towering fly hit by Gronski was dropped by the Wooster left fielder, allowing Meador to score all the way from first. An infield single from senior second baseman Paul Pakan followed, and another Wooster error on the throw brought home Gronski.

After five stellar innings on the mound, junior left-hander John Fortunato ran into a bit of trouble in the sixth with a pair of walks to lead off the frame, but junior righty Josh Suvak picked up a key strikeout and held the Scots to just one run.

Riding that wave of momentum, the Spartans added three runs in the bottom of the inning as Frey knocked a two-run double to right center, and Keen plated one with a sacrifice fly.

With the score at 5-1, Wooster struck for two in the top of eighth thanks to RBI singles from Cal Thomay and Brendan Taylor. The Scots then picked up an RBI double from Frank Vance with two out in the ninth, but Spartan sophomore Daniel Sondag caught the final batter looking and slammed the door on the comeback try.

Fortunato (2-1) threw one of the finest outings of his career with 5.1 innings of one-run ball and six strikeouts in the win. Suvak logged the next 2.1 innings out of the bullpen, while Sondag threw the final 1.1 with three strikeouts for his second save in as many days.

Wooster’s Johnathan Ray was 2-for-4 with a run and an RBI.

Matt Felvey started on the mound and allowed three earned runs in five innings in the loss. Four Wooster errors led to a pair of unearned Spartan runs.

The Spartans also swept Westminster College on Saturday, April 6, and have won six of the last seven games. The Spartans broke a tie in the top of the ninth in the first game with three runs to clinch an 8-6 win. The team’s offense continued its impressive streak while the pitching locked down the Titans in a 9-1 victory in seven innings. Case had 25 combined hits in the past two games and the UAA champions average a conference leading 10.77 hits per game.

Against the Titans, the team was led by Gronski, who went 3-for-5, but also picked up four walks. Sophomore catchers Robert Winemiller and Kerrigan Cain both went 4-for-7 on the day while Keen was 4-for-10 with two doubles and three RBIs.
The Titans fell to 10-13 on the year.

The team is in the midst of a nine-game home stand. After Wednesday’s game against Oberlin College was canceled, the team is looking to reschedule the double header on Tuesday, April 16. The Spartans will also host John Carroll University Wednesday, Apr. 17, at 4 p.m.