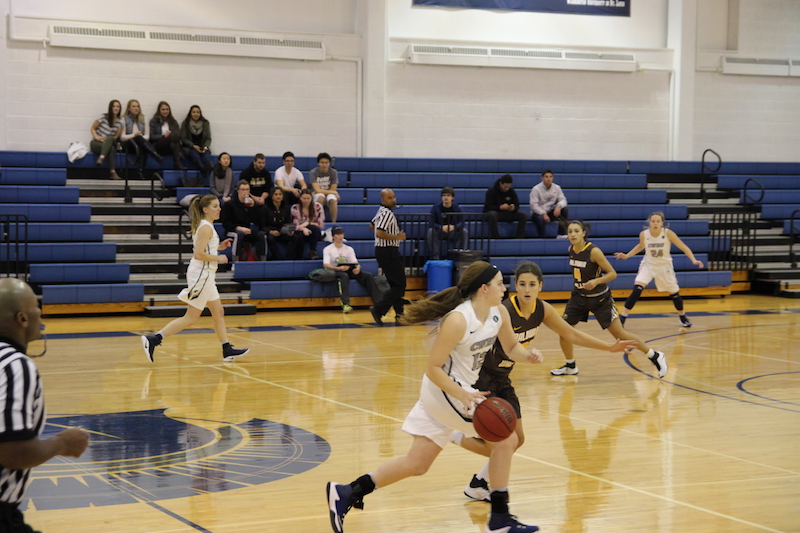 Alexis Amburgey drives into the front court looking for an open teammate. After a scorching hot start to the season, the women’s basketball team has lost three straight games.

It has been a rough week for the Spartans, who have now lost three straight games. The Case Western Reserve University women’s basketball team played two home games this week and lost both. The first game was against Emory University, and the second was against the University of Rochester Yellowjackets. The losses stung more because in both games the Spartans held a lead going into the fourth quarter. The team is looking to rebound against the University of Chicago at home this weekend.

On Friday, Jan. 20, the Spartans came back to Cleveland to defend their home court against Emory University. CWRU was coming off a loss earlier in the week after playing at Brandeis University. Having come home, the team was looking forward to playing their next four games at home and thrive off of the friendly crowds. However, their opponents came ready to play, and the Spartans were overwhelmed.

Second-year guard Hillary Hellmann again led the Spartans in points with 20 on 7-for-18 shooting, beating out Emory’s top scorer by four points. In the third quarter alone, Hellmann scored 14 points.

The real statistic that mattered in this game was rebounds. Emory was able to pull down 14 more rebounds throughout the matchup, many of which were offensive and gave the team a second opportunity to score. Although the Spartans came into the fourth quarter with a one-point lead, Emory seemed to suddenly change gears while the Spartans simultaneously slammed on the breaks. Despite the game being close for the first three quarters, the fourth quarter was completely one sided. Emory outscored CWRU 19-4 in the period, giving them a 79-65 victory.

On Sunday, Jan. 22, the Spartans took on the Yellowjackets. The game started rough—the Yellowjackets outscored CWRU by 10 points in the first quarter. However, by the end of the half, the Spartans were up by one. Then, after a back-and-forth third quarter, CWRU held a 2-point advantage heading into the final quarter.

Yet again, Hellmann had an incredible third quarter, scoring 13 of her team-high 24 points for the game in just the one period. But having the lead did not mean much as Rochester was able to take control in the fourth quarter and win the game by nine.

Yet again, the story of the game was rebounds and a fourth-quarter collapse. The Spartans were out-rebounded by 22, giving up an incredible 18 offensive rebounds to the other team. After the loss, the Spartans fell to 10-6 for the season and 2-3 against University Athletic Association (UAA) opponents, making them tied for fifth in the UAA along with Emory and Brandeis.

In order for the Spartans to get back on track and salvage this four game home stand, they will need to crash the boards and keep their foot on the gas throughout all four quarters. UAA rival Chicago comes to town for a game tonight at 6 p.m. and Washington University in St. Louis visits on Sunday Jan. 29 for a game at 2 p.m. Both games will be played at Adelbert Gymnasium as part of Throwback Weekend.
Chicago (11-5, 4-1) is currently tied with Carnegie Mellon University for the UAA lead, but only have a slightly better record overall than the Spartans (10-6, 2-3) do, so victory is not outside of the team’s reach. No. 11 Washington (14-2, 3-2) will be a much tougher matchup. Look for the Spartans to put bodies down low and stop giving up second possessions. If the team doesn’t do that, we will likely see this losing streak continue.