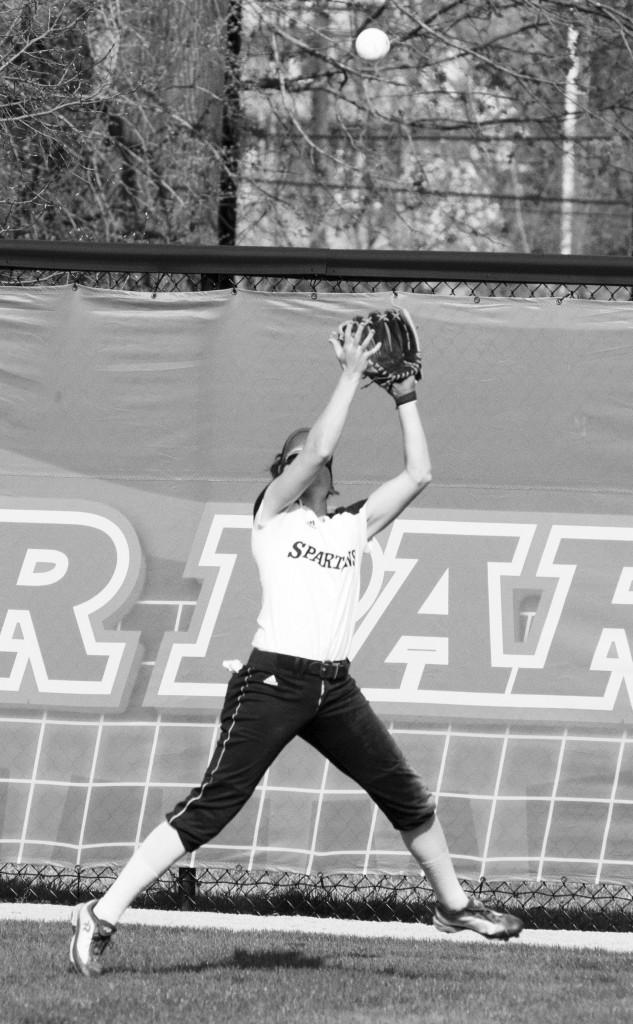 The cancelation of a doubleheader on Wednesday left the Spartans looking for opponents. Luckily, Pennsylvania State University-Altoona was up to the task of hosting the Case Western Reserve University softball teams. The Spartans came into the double header with 23 wins, tied for the third most in school history, and they left with 25 as they completed the sweep with 13-4 and 11-5 victories.

The Spartans also set a pair of records as senior first baseman Lauren Wolz hit a pair of home runs on her way to setting the program’s career hits record. Wolz blasted a solo and a two-run shot as the Spartans ran away with a 13-4 victory in the first game of the double header.

The Spartans broke open the first game early by taking a 3-0 lead in the top of the first. With Taylor providing a defensive effort on the mound, the Spartans doubled up their lead in the fourth inning when freshman second baseman Molly O’Brien hit an RBI triple. UAA Hitter of the Week Makenzie Lein followed that with an RBI double and freshman right fielder Gena Roberts drove in a run with another double.

The Nittany Lions managed to get on the board with a big inning in the bottom of the fourth. Kahla Lutz and Brooke Morningstar nailed back-to-back solo home runs. Third baseman Lily Glunt cut the Spartans’ lead in half when she hit a two-run double, bringing the score to 6-4.

The PSU-Altoona offense wasn’t enough as the Spartans doubled up in the game’s final two innings. Roberts and Wolz hit back-to-back home runs in the sixth as the Spartans scored three runs. The home run was Roberts’ team-best seventh of the season. Wolz then hit a two-run homer in the seventh as sophomore catcher Amy Taylor and Rebecca Taylor each had RBI hits to close out the game.

In the nightcap, Rebecca Taylor once again went the distance, improving to 19-10 while allowing five earned runs on eight hits. The Spartans once again got off to a quick start with five runs in the first inning. PSU-Altoona responded with two of their own and the Spartans held the 5-2 lead until the fifth inning.

The Spartans put up six more runs on just four hits as Case took advantage of sloppy pitching and a quartet of walks. The Nittany Lions scored three more runs to prevent a loss via the mercy rule, but were unable to mount a full comeback.

O’Brien led the Spartans with three hits in five at bats, a double, and an RBI. Lein went two-for-five with a pair of runs. Senior third baseman Kaeleen Boden went one-for-four with a two run double and another RBI on a sacrifice fly.

The Spartans will round out their season with their final games of the year in a doubleheader at Mather Park against Wittenberg College on Sunday, April 29. The game will also mark the dedication of the new scoreboard by the Flora Stone Mather Alumnae Association. The first pitch is scheduled for 2 p.m.