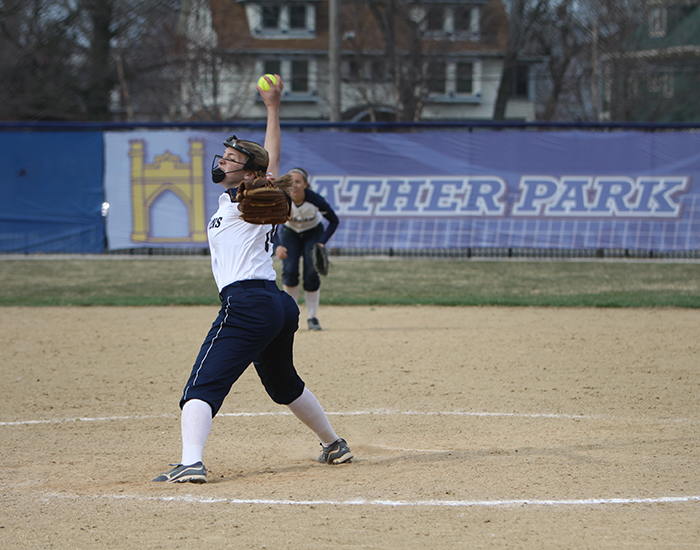 Freshman Rebecca Molnar is second on the team in pitching with 3.45 ERA. Molnar picked up her second save of the season with a three inning no-hit relief effort against Mount Union.

A second-straight dominant outing on the mound by sophomore pitcher Rebecca Taylor highlighted the Case Western Reserve University softball team’s sweep of the University of Mount Union on Monday afternoon at Mather Park. The Spartans won by scores of 4-2 and 6-2 in a make-up twinbill that had been postponed twice in the last month due to inclement weather.

Playing their best ball of the season, the Spartans (18-13) have now won nine of 10 and will continue a season-long eight-game home stand this Friday, April 19, versus Hiram College at 3:30 p.m.

The two losses dropped the Purple Raiders to 16-9.

Taylor (14-10) recorded her 14th complete game of the season in the opener and allowed only one earned run on three hits, no walks, and nine strikeouts. The sophomore right-hander now has 20 strikeouts versus just two earned runs in her last 14 innings.

In a day where the Spartans generated a majority of their runs with “small ball” and aggressive base-running, freshman third baseman Rachel Komar continued her torrid pace at the plate with a combined 4-for-8 performance and is now 13-for-23 (.565) over the last six games.

In game one, the Spartans took advantage of a first-inning error and scored twice as junior catcher Amy Taylor and sophomore right fielder Gena Roberts hit back-to-back RBI singles. The Spartans tacked on another score in the second when freshman first baseman Erin Dreger drilled an RBI single through the middle of the infield, but Mount Union got the run back in the third thanks to a Spartan error.

That error would not prove to be very costly, however, as Rebecca Taylor only allowed one other Purple Raider run on a solo homer in the seventh by Megan Okuda.

The Spartans picked up one more insurance run in the sixth when freshman designated player Kristen Klemmer hit an opposite field double to left center and eventually came around to score following a pair of passed balls.

Mount Union’s Rachel McAninch (8-6) was the tough-luck loser with only two earned runs allowed and seven strikeouts in six innings.
For the game, Komar was 3-for-4, while Roberts and Klemmer were each 2-for-3.

In game two, both sides went scoreless in the first, and Amy Taylor picked off a pair of Mount Union runners from second to end a second-inning threat for the visitors. In the bottom of the frame, Rebecca Taylor and junior shortstop Makenzie Lein hit back-to-back doubles to set up a sacrifice fly by sophomore leftfielder Ashley Parello giving Case a 1-0 advantage.

The Purple Raiders answered in the following inning with a run via a Kristen Gromes single, but Amy Taylor once again ended the visitor’s rally when she threw out a runner attempting to steal second.

Riding that wave of momentum, the Spartans put three runs on the board in the bottom of the third as a Mount Union error left the door open for a two-run double by Roberts, who later scored on a double steal with Rebecca Taylor.

In the fourth, the Raiders cut one off of their deficit with a double steal of their own, but Amy Taylor and sophomore second baseman Molly O’Brien connected to foil a second double steal try in the inning.

Then in the fifth, the Spartans put the game away with two runs on five hits. Rebecca Taylor and Lein each hit RBI singles in the frame to make the score 6-2.

Lein capped the win with the second of her two spectacular diving plays at shortstop in the next inning.

On the mound, freshman Marisa Kohley started and threw the first four innings to improve to 3-0 for the season. Classmate Rebecca Molnar recorded the final nine outs without allowing a run for her second save.

Offensively, Rebecca Taylor was 3-for-3 with a double. Amy Taylor, Lein, and Roberts were each 2-for-3 as the Spartans totaled 12 hits.