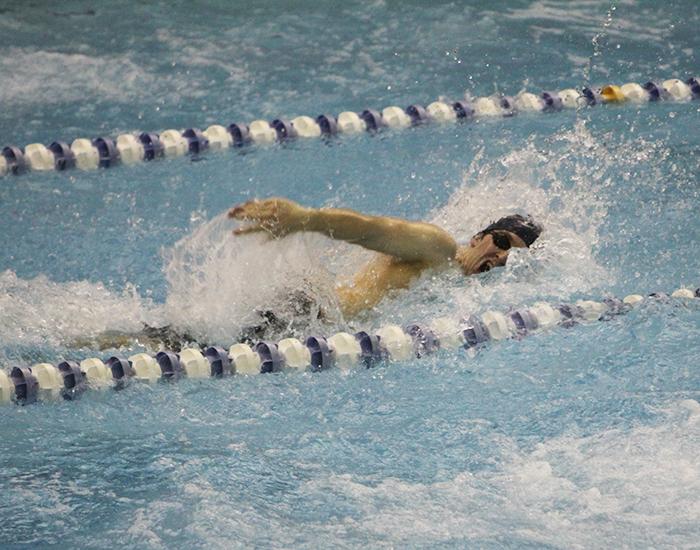 Men improve to 6-0, women to 3-3, to face Oberlin in championship

The Case Western Reserve University swimming and diving teams both swept the opening weekend of the Cleveland City Tournament last weekend at the Veale Natatorium. Competing against Division II foes Lake Erie College and Notre Dame College, the two teams swam to comfortable victories. The Spartans took down Notre Dame on Friday, Nov. 2 by a combined score of 332.5-145.5. The next morning, Case topped Lake Erie 306-168.

The two victories put the men at 6-0 on the season and the women at 3-3 before the two teams head to Oberlin College tomorrow for the Cleveland City Tournament Championship.

The Spartans were led by junior diver Daniel Jacobson. Jacobson swept all four diving events on the weekend. He finished first against Lake Erie with 295.1 points on the one-meter springboard and 295.7 points on the three-meter springboard. He won against Notre Dame with 276 points and 299.95 points on the one- and three-meter boards, respectively. The quartet of wins earned him recognition as the University Athletic Association diver of the week, one week after he placed second in both events at the UAA Invite.

Against Notre Dame, Case was led by double-winner Sean Nickley who won both the 100-yard backstroke in 55.08 seconds and the 200-yard individual medley in a time of 2:00.91.

The women picked up a pair of wins from double-winner Rebecca Pakradooni. Pakradooni, a freshman, won the 50-yard freestyle in 25.33 seconds and the 100-yard butterfly in 1:00.58. Pakradooni also won the 500-yard freestyle against Lake Erie. Freshman diver Riki Drout won both diving events with scores of 148.35 points in the one-meter event and 171.60 in the three-meter event. Sophomore Elliott Kerbel also had an impressive performance against Lake Erie in the 50-yard freestyle with a time of 21.43 seconds, the ninth fastest time in program history.

The Spartans won one of the meet’s two relays against Lake Erie with sophomore Eric Haufler teaming up with juniors Heath Hudgins, Scott McHenry, and Gus Bailey in the 400-yard freestyle relay. The quartet touched the wall with a time of 3 minutes 11.67 seconds.

Drout also matched Jacobson’s wins on Saturday, winning the one-meter with 183.2 points and the three-meter with 193.7 points.

The women won both relays against Lake Erie, with freshman Alison Thirion, senior co-captain Krysta Payne, Dillione, and Pakradooni touching the wall first in 4:12.00 in the 400-yard medley relay. In the 400-yard freestyle relay Tillie and freshmen Nicole Thompson, Thirion, and Rachael Loek won with a time of 3 minutes and 47.37 seconds.

The Spartans will travel to Oberlin tomorrow for the finals of the inaugural Cleveland City Tournament. The meet is scheduled to begin at 1 p.m.

Next week the Spartans will travel to No. 2 Kenyon College for a quad-meet against Kenyon, Grove City College, and Division II Gannon University. The meet will kick off at 1 p.m. on Saturday, Nov. 17.