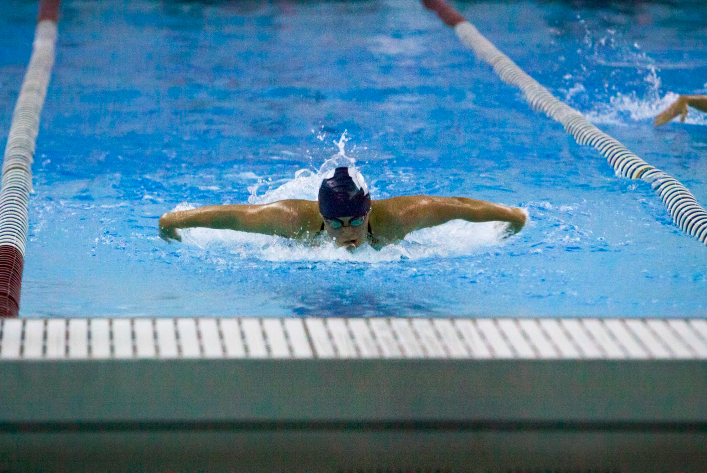 The men’s and women’s swimming and diving teams swept the Wooster Invitational for the second straight year.

Both the men’s and women’s swimming and diving teams placed first at the Wooster Invitational this past weekend. This three day invitational followed up strong performances by both teams at Grove City College, as the team is beginning to fire on all cylinders.

With the win, the men’s team won their seventh consecutive Wooster Invitational title. Case Western Reserve University scored 1,618 points, which was 403 points ahead of second-place Westminster College. Gannon University came in third place out of the nine teams competing with 1,206 points.

The CWRU women’s team beat the entire 10 team field as they recorded 1,846.5 points, second-place Edinboro University tallied 1,265.5 points while third-place Westminster scored 1,149. This win was the second in a row for the CWRU women, and also the second consecutive year the men’s and women’s teams swept the meet.

“I was incredibly pleased with our performance,” said Head Coach Doug Milliken. “The Wooster Invitational is an opportunity to see where we are at the halfway point of the season. I hope the wins provide the team with some well-deserved confidence moving forward.”

One of the big stories from the meet was that fourth-year student David Merriman earned a NCAA Division III ‘B’ cut time in the 1,650-yard freestyle. Merriman won the event in a time of 16:14.47. Hitting the ‘B’ cut time gives Merriman a much better shot of receiving an invitation to the NCAA Championship meet in March.

“Frankly, it’s a lot about the little things,” Milliken said of potential areas for improvement. “The training base is there, and if we can clean up some things, the performances will get even better.”

The Spartans will be off from competition for over a month before competing next semester. On Jan. 21, CWRU will host Ohio Northern University and Hillsdale College in a tri-meet.

As for how the team will stay focused over the long break, Milliken said it will be up to the individual athletes to do what they know they need to do before the squad takes a training trip down to Florida at the end of winter break. Milliken is confident that the team will be strong and ready to go when 2017 rolls around.