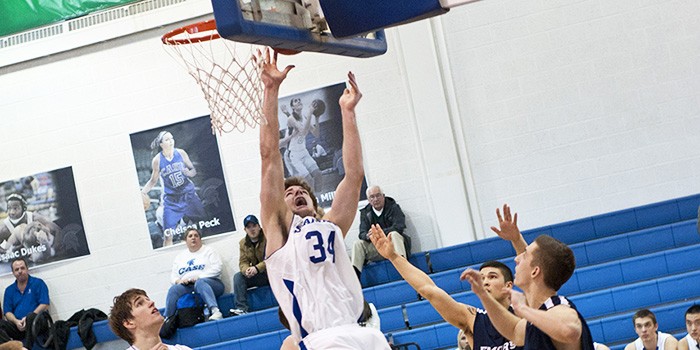 Senior forward Austin Fowler scored a team-high 18 points, and the Case Western Reserve University men’s basketball team led for all but the first 4:34 of action in a 73-63 victory at Kenyon College on Sunday evening inside Tomsich Arena.

The Spartans won their second straight and improve to 3-1 overall, while the Lords drop to 2-2.

Fowler’s 18 points were accompanied by eight rebounds and helped to push him to his team-leading 13.8 points-per-game. In addition, junior center David Thompson was a force in the middle with 12 points, eight rebounds and five blocked shots. Sophomore guard Ken Gibbons also scored in double figures with a career-high 11 points.

Kenyon scored the opening two points of the contest, and the game was later tied at 5-5 when Jonathan Amador hit a three-pointer for the Lords at 15:42. The next possession resulted in an offensive board and a Fowler three-pointer at 15:26 as the Spartans opened a 14-2 run.

Sophomore forward Dane McLoughlin closed the run with a three-pointer that made the score 19-7 with 9:48 left on the first-half clock. Kenyon answered with a quick 10-0 run and pulled within two with a Brian Lebowitz layup at 7:20, but Case was able to regain control with an 8-2 run of its own that culminated in a McLoughlin layup with 2:45 remaining on the clock. The Spartan lead eventually grew to 31-20 at halftime.

In the second half, Kenyon opened on a 13-5 spurt and pulled to 36-33 after a three-point play by Ikenna Nwadibia at 15:51. From there, it was all Spartans as a 15-6 run ending with a triple by junior guard Tim Chung made the score 51-39 with 10:24 left to play. The Spartan lead never dipped below six points the rest of the way.

For the game, the Lords were led by Nwadibia with a game-high 23 points and 12 rebounds.

The men shot 38.8 percent from the floor, going 9 for 23 from beyond the arc for a shooting percentage of 39.1 percent. The Spartans’ defense thrived against the Lords, especially in the backcourt. The Lords shot 37.1 percent from the floor and went 3 for 15 from three-point range. The difficulties for the Spartans came in containing Nwadibia and Lebowitz inside. Nwadibia had a game-high 23 points on 10 for 18 shooting and 12 rebounds while Lebowitz put up 16 points and 12 rebounds.

The Spartans are back on the hard court this Saturday, Dec. 1 when they will travel to Oberlin College to take on the Yeomen. The Spartans will also host Allegheny College next week on Wednesday, Dec. 5 at 7 p.m. at the Horsburgh Gymnasium.