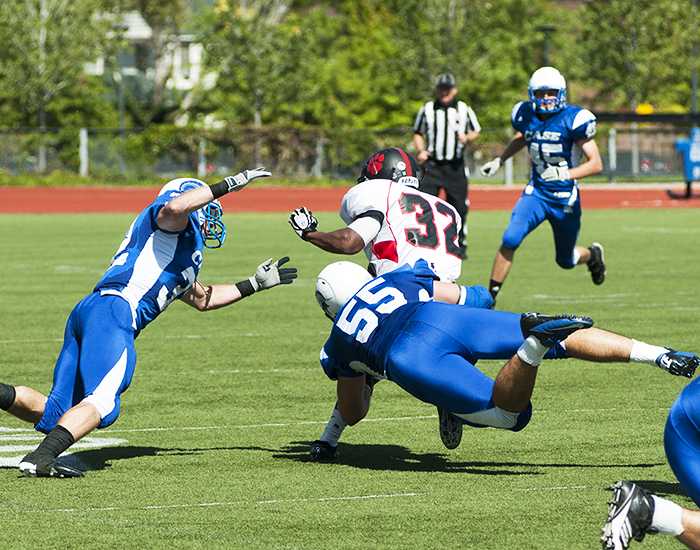 Senior wide receiver Vinny Bell posted a career-high seven receptions for 180 yards and a touchdown as the Case Western Reserve University football team closed out the 2012 season with a 36-24 victory versus Carnegie Mellon University in the 27th Annual Academic Bowl on Saturday at Case Field. The event was designated as the Billy Deitmen Memorial Game.

Prior to the game, CWRU honored the memory of 2011 graduate Billy Deitmen, who died unexpectedly at the age of 23 on Oct. 18.

The Spartans finish the season at 6-4 overall and 2-1 in the University Athletic Association. The Tartans drop to 6-4 and 1-2 in the UAA with their sixth-straight loss to Case.

The win gave the Spartans a second-place finish in the UAA. Washington University (5-5, 3-0), who defeated Case in Cleveland last weekend 10-7, clinched the conference championship with a 23-7 victory of the University of Chicago (4-6, 0-3).

In addition, sophomore running back Manny Sicre rushed for a game-high 107 yards on 26 carries, and sophomore quarterback Billy Beecher totaled 68 yards on the ground with a career-best three scores. For the game, the Spartans won the battle in time of possession, 37:17 to 22:43, and outgained the Tartans, 484 to 220.

The Spartans took the opening drive of the game 69 yards on 11 plays and found the end zone when Beecher rushed in from one yard out. Freshman Cullin Brown hit the extra point to make the score 7-0 with 8:40 left in the first quarter.

After forcing the Tartans to punt, the hosts put together a second long drive that covered 57 yards on 11 plays and ended with a career-long 33-yard field goal by Brown at the 1:57 mark. The possession ate 5:23 off of the game clock.

The ensuing drive looked destined to yield points for the visitors, but a 31-yard field goal attempt from Connor Young was blocked by Spartan senior defensive end Adam Watson at the 12:46 mark of the second quarter. Watson’s fifth combined block this season put a halt to a 10-play, 65-yard drive for the visitors.

Undaunted, CMU then began a run of 21 unanswered points, beginning with a 26-yard touchdown pass from quarterback Rob Kalkstein to wide receiver Tim Kikta at the 9:57 mark of the second quarter. The Tartans’ drive covered 45 yards on five plays and was capped off by a Young extra point.

Several drives later, the Tartans gained possession at the home five following an interception. Two plays later, fullback Jared Delello rushed into the end zone from three yards out, and a second PAT by Young made the score 14-10 with 6:30 remaining in the half.

The Spartans then drove to midfield, but a botched punt resulted in a 56-yard TD return by cornerback Sam Thompson. Young hit his third PAT, and the Tartans led 21-10 with 3:17 left before the break.

However, the Spartans were able to trim into the lead before half as senior quarterback Erik Olson scored a one-yard TD run with 44 seconds left on the first half clock, after hitting Bell for a 37-yard pass. The extra point was missed, and the score sat at 21-16 in favor of CMU.

The Tartans got half of those six Spartan points back before the clock hit zero as Young capped an eight-play, 52-yard drive with a 19-yard field goal as time expired.

In the second half, the Spartans got off to a quick start and took their opening drive 83 yards on 11 plays, with Olson hitting Bell for a 32-yard TD strike at the 9:13 mark. The extra point was missed, and CMU held a 24-22 advantage.

After the rest of the third quarter went scoreless, Case moved back in front when Beecher scored a nine-yard TD run to cap a five-play, 58-yard drive with 13:43 left to play. Beecher then hit Sicre for a two-point conversion, and the Spartans led 30-24.

CMU’s next drive ended at the Spartan 23, when senior cornerback Cary Dieter caught his second interception of the season, but the hosts gave the ball back three plays later on a sack and fumble.

The Spartan defense came up big again and held the visitors to a 31-yard field goal try. Junior safety Jacob LaFleur then broke through the line and blocked the try off of the foot of Young.

Case then put the game away with a five-play, 65-yard drive that culminated in a career-long 34-yard TD run for Beecher. A missed two-point conversion left the score at 36-24 with 2:11 remaining.