Spartans trump Carnegie Mellon, fall to Emory, sit No. 4 with one game to go 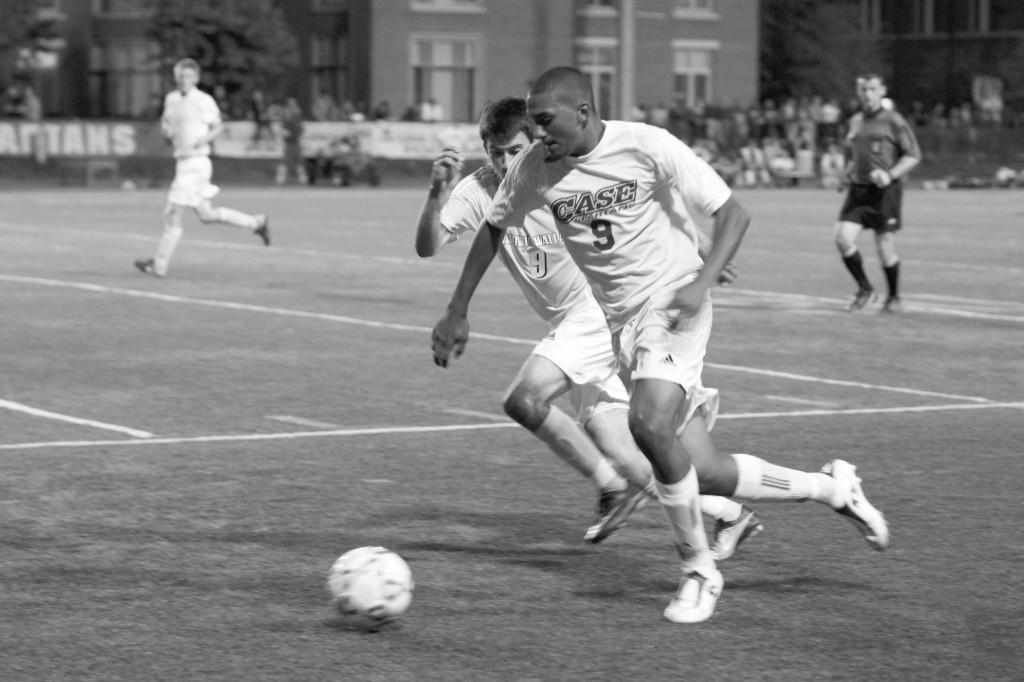 The Spartans traveled to both Carnegie Mellon University and Emory University this Halloween weekend to compete in two of their three final regular season games. On Friday, Case Western Reserve University extended their winning streak to four games, as they defeated Carnegie Mellon down 2-1. The Spartans were not so fortunate during their Sunday match against Emory, and suffered a 2-0 loss. After the weekend’s performances, the Spartans improved their overall record to 10-5-3 and UAA conference record to 3-3. CWRU will wrap the regular season up against the University of Rochester with hopes to extend their season with a bid to the NCAA tournament and an outside chance at the UAA Championship.

The Spartans were considered the underdog as they entered the match against regionally ranked No. 4 Tartans. The first half played out with no scores, but both teams were equally battling it out. Although Carnegie Mellon outshot CWRU 8-4, the defensive presence allowed the Spartans to stay level with the Tartans, with junior keeper Ben Yabrow picking up two big saves.

The CWRU back line was anchored by a strong performance by Niro Wimalasena. Wimalasena, a junior, was selected as a First-Team ESPN The Magazine Academic All-District IV honoree earlier this week.

At the start of the second half, the Spartans did not waste any time, putting a score up on the board. Three minutes into the half, junior midfielder Kyle Alsup slipped one past the CMU keeper after a pair of passes from sophomores Ross Twanmoh and Kostis Theoharides.

The Tartans tried to tie up the game, but three more saves by Yabrow kept the Spartans on top. In the 78th minute, the Spartans doubled their lead with a goal by senior Elliot Fishman, his first of the season. The Tartans retaliated in the 80th minute when CMU forward Max Tassano struck with a quick header, cutting the lead in half.

The Spartans managed to keep CMU from equalizing despite being outshot 17-10 in the game. The No. 9 regionally ranked Spartans continue to push for national recognition as they defeated a team that was ranked No. 3 in the country at one point by d3soccer.com.

Against the Tartans, CWRU fought until the end, and came one step closer to the postseason. Notably, the two Spartan scorers were both Pittsburgh natives, its special to have a standout game in front of familiar faces, even if it was an away game.

Elliot Fishman, who recorded his first goal of the season, exclaimed, “It was a great feeling winning that game as a senior, in my hometown of Pittsburgh, with friends and family watching.”

The Spartans could not become complacent with Friday’s victory, as they had another battle looming two days later against the nationally ranked No. 14 Emory Eagles. Throughout the first half, the Spartans and Eagles were neck and neck, but Emory’s Andrew Natalino scored his 11th goal of the season off of a cross from Charlie Donahue.

Fishman describes that regardless of the score at the end of the first 45 minutes, “I believe the first half was some of the best soccer we have played all season.”

In the middle of the second half, Emory put another goal in, raising the score 2-0. The Spartans narrowly missed a few chances that could have turned the game in their favor, and unfortunately, Emory pulled out ahead.

These games were tough battle for the Spartans, as these final conference games will determine the top dogs of the UAA and will determine who will receive a bid to the NCAA tournament. With this win, Emory boasts an undefeated season on their home field, 10-0 overall, and puts them at the second in the conference, tied with Washington University.

However, this Spartan loss does not mean all is lost for the CWRU men’s soccer team. The Spartans have nine points in the UAA, three points back from first place New York University. Unfortunately for CWRU, the three teams ahead of them all face teams in the bottom half of the conference. The final game of the season remains at the University of Rochester this Saturday, and although the UAA title is all but out of reach, the Spartans are still trying to acquire one of the prized NCAA tournament bids.

“A win against Rochester will put us in a good position to receive an at-large bid for the NCAA tournament. This weekend will be the ultimate test for our team, do or die, win or go home, and for us seniors; we are playing for our careers. I’m sure I can speak for all of the other seniors in saying that I am just not quite ready for my career at Case to end,” said senior Jordan Fox, describing the implications the game has on CWRU’s season.

The Spartans have the talent, the heart, and the resume to make it to the tournament, and it all comes down to their final regular season math against the University of Rochester on Saturday, Nov. 6 at 7:30 p.m.