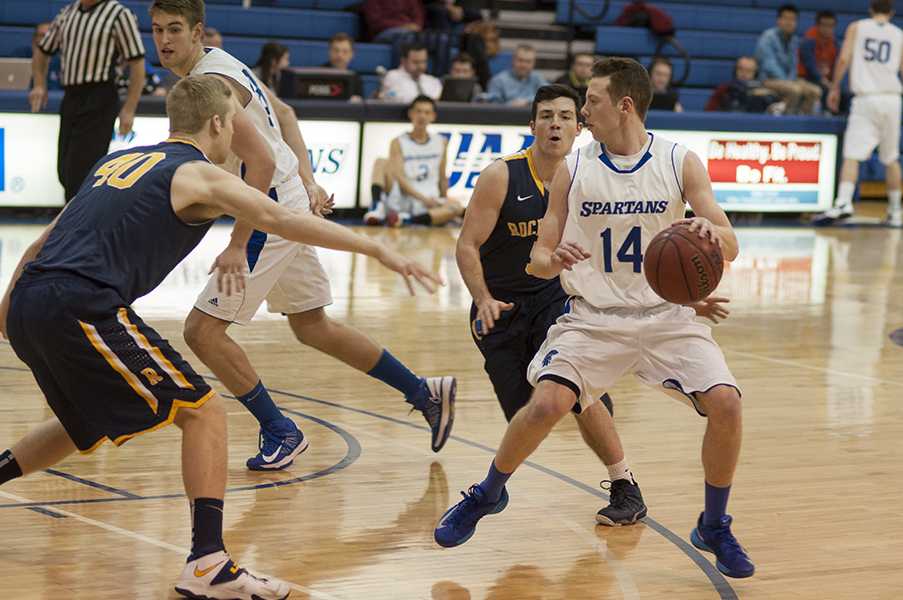 It was a weekend of mixed emotions for the Case Western men’s basketball squad. An amazing win on senior night was followed by a crushing defeat during the season home finale. The Spartans now stand at 13-9 and are 5-6 in UAA play. With just a few games remaining, the focus is still strong for the Spartans. “[Washington University] is undefeated in UAA play and we were beating them late in our game at Case,” said head coach Sean McDonnell. “We need to play our best game of the season, and if we do we’ll have a great chance.”

The Spartans played Rochester on Friday night and Seniors Tim Chung and David Thompson were honored in a small ceremony prior to the game. Following the ceremony Chung stepped up to drop 20 points on Rochester, sophomore Jimmy Holman added 19 of his own to boost the Spartans to a close 67-66 comeback win. The Spartans started slow and were down by 15 multiple times in the first half. The Yellowjackets opened the game by hitting eight of their first 10 shots to grab a 19-8 lead after just under seven minutes of play. The Spartans fought back but slipped heading into the locker room as Rochester finished the half with a 8-0 run.
Feeding off of the emotion of the student section, the Spartans exploded out of the locker room the second half, as Chung hit the first seven points to cut the lead to single digits in just two minutes of play. The Spartans chipped away at the lead heading into the final minutes, with the Yellowjackets still on top with a 64-59 lead with 3:18 left to play. Holman put the next two buckets on the board to cut the deficit to one. Forward Dane McLoughlin connected from behind the arc to give the Spartans their first lead of the game on the ensuing possession, going up 66-64 with only 1:39 left on the clock. Rochester couldn’t equalize and a last ditch effort rattled off the rim as the final buzzer blew. “Our team played well, especially in the second half,” said McDonnell.

The Spartans started strong in their final home game of the season against Emory before it turned ugly, with Emory crushing the Spartans 84-68. Jumping out to a 16-12 lead by the 11:05 mark with a beautiful shot from behind the arc by McLoughlin, who would put up 22 points in the contest. The game turned extremely physical from there as Emory looked to exploit the Spartans’ biggest weakness: transition ball. Emory dominated the game here, scoring 52 points in the paint and 30 off of turnovers.

Miscues by the Spartans came off full court presses by the Eagles and the Spartans struggled to set up their strong half court offense. Lost possessions due to miscommunication started to get to the Spartans and their play began to crack. This lead to a technical against McLoughlin and a highly controversial block call against Thompson. Emory rode that momentum to a 25-8 run and to a 41-26 lead heading into the locker room. “Emory has been a tough matchup for us, and we really struggled to play well on Sunday,” said McDonnell.

The Spartans were unable to funnel their anger from the first half into any strong run despite many short flashes of possible comebacks. Mistakes on both ends of the court would crush any hope of a Spartan revival. There was the positive of getting some of the younger players off the bench in the final minutes as the team begins to look forward. “Our team’s success this year was going to hinge on the talented, experienced returning players we had,” said McDonnell, “but we look forward to watching our young players work hard to develop.”

The Spartans have three more games this year. While the season is drawing to a close, the team isn’t done yet. “We still have a number of goals to accomplish,” said McDonnell.