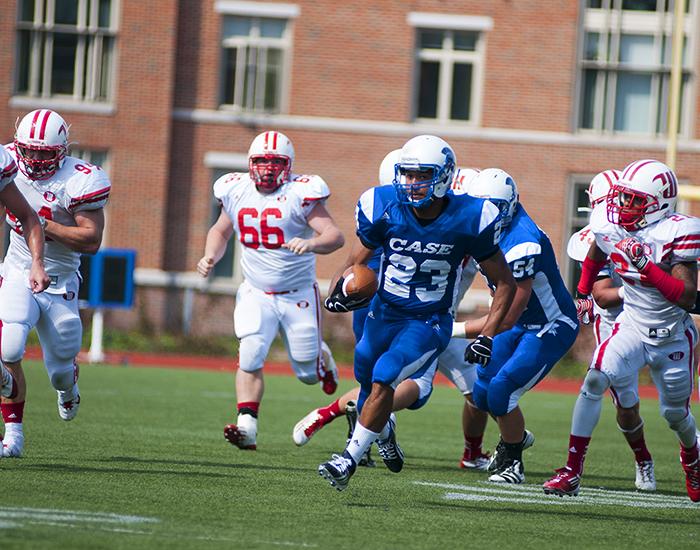 Despite a game-high 163 yards from scrimmage by sophomore running back Manny Sicre, the Case Western Reserve University football team fell short by a score of 14-10 in its upset bid of No. 21 nationally-ranked Wittenberg University in front of a capacity Homecoming crowd at Case Field.

The Spartans held Wittenberg without a score in the second half, but saw several late drives end without points. Sicre totaled 83 yards receiving on eight catches, and rushed for 80 yards on 21 carries. Over the last three games, Sicre has 525 yards from scrimmage.

Both teams saw their initial drives fizzle out in opponent territory, but Wittenberg took its second drive 80 yards on 10 plays and found the end zone when quarterback Reed Florence took a designed run six yards to the end zone. Sean Williams hit the extra point to make the score 7-0 with 7:22 remaining in the first quarter.

The ensuing Spartan possession reached the Wittenberg 13, but a field goal try from 30 yards out hit the right upright, leaving the score at 7-0. The key offensive play of the drive was a 21-yard slip screen from senior quarterback Erik Olson to senior wide receiver Brian Rice.

Undaunted, the Spartans kept the pressure on and took their next drive 80 yards on 11 plays to tie the score as Olson rolled out of the pocket and found freshman wide out Bryan Erb for a three-yard touchdown pass. Freshman Won Kun Park hit the PAT to cap a five-minute, 25-second drive at the 7:34 mark of the second quarter.

However, the Tigers came back on their final possession of the half and marched 74 yards on seven plays with Florence connecting on a 16-yard TD pass to WR Brendan Cunningham with 1:50 left before the break. Williams nailed the PAT to cap a drive that took only 1:02 off of the clock and made the score 14-7.

On Case’s second drive of the third quarter, the Spartans orchestrated a 64-yard drive on 14 plays that resulted in a 20-yard field goal by Park with 3:35 remaining in the period. The possession took 7:15 off of the clock and brought the score to 14-10.

In the fourth quarter, the Spartans’ best chance came at the end of a seven-minute, 42-yard drive. Sicre was stopped on a fourth-and-one at the visitor 19-yard line with 10:02 left to play.

For the game, Sicre was the game’s leading rusher and receiver. Olson completed 21 of 32 passes for 175 yards, one TD and one interception. Rice totaled three receptions for 48 yards, while sophomore RB Ricky Hanzlik contributed a career-high 59 yards rushing on 10 carries.

The Spartans are back in action at home on Saturday, Oct. 6 versus The College of Wooster in the final installment of the annual Baird Brothers’ Trophy game at 1 p.m.