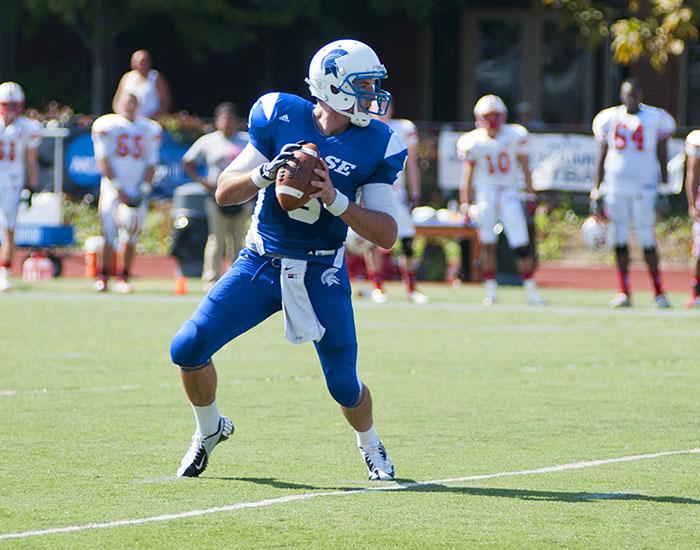 Over the weekend, Case Western Reserve University hosted the College of Wooster Fighting Scots for one last installment of the annual Baird Brothers’ Trophy Game. The Spartans started strong with a 17-0 first quarter lead and held off a late comeback attempt to defeat the Fighting Scots, 31-28 on Saturday, Oct. 6, afternoon at Case Field. Case evened its overall record to 3-3 heading into a bye week, while Wooster fell to 1-4 with its sixth-straight loss to Case.

The matchup was the final Baird Brothers’ Trophy Game. As the University Athletic Association and North Coast Athletic Conference football scheduling agreement expires, Wooster will begin playing a complete NCAC round robin schedule, while Case will join the Presidents’ Athletic Conference as an affiliate member in 2014. The Baird Brothers’ Trophy was introduced during the inaugural meeting between the two schools in 1984 by Bob Baird, an economics professor at Case, and Bill Baird, an economics professor at Wooster. The brothers incorporated their passion for fishing into the rivalry by rewarding the winning team each season with a golden fishing stringer with carved brass fish representing each meeting.

The Spartans dominated the first quarter as the offense put 17 unanswered points on the board, starting with a 26-yard field goal from freshman kicker Won Kun Park at the 11:49 mark. Over seven minutes later, senior quarterback Erik Olson connected with sophomore wide receiver Sean Lapcevic for a nine-yard touchdown pass that capped off a seven play, 66-yard drive at 4:45. The drive included a 41-yard reception by senior wide receiver Brian Rice that moved Case to the Wooster 25.

Following a Wooster fumble on the ensuing kickoff, Olson found freshman wideout Bryan Erb on a 22-yard strike. Park tacked on his second PAT, and the Spartans led 17-0 with 3:50 in the opening period. It was Erb’s second collegiate receiving touchdown.

After trailing by 17 early, the Fighting Scots made their way to the end zone for their first score at 12:28 of the second quarter when running back John Battaglia punched through the Spartan defense for a one-yard run to cap a 13-play, 69-yard drive.

However, not to be outdone, Olson and the Spartans produced the third aerial score of the half when the senior hooked up with Rice for a 17-yard touchdown reception with 10:49 left before the break. The touchdown was Olson’s 10th passing touchdown of the season. This is the second consecutive season that Olson has had 10 or more passing touchdown. Park’s third PAT capped off the quick four-play, 73-yard drive for the home team and a 24-7 lead.

The lead stood untouched until near the end of the first half when the Fighting Scots orchestrated a five-play, 48-yard drive that ended with a 30-yard touchdown pass from junior quarterback Richard Barnes to senior wide receiver Zack Weidrick with 20 seconds remaining to bring the score to 24-14.

Out of the halftime break, Case marched down the field on its opening drive, needing just six plays to cover 72 yards. Freshman running back Ezra Kim recorded his first collegiate touchdown as the Dublin, Ohio native scampered into the end zone from three yards out. Park completed another point after, to give the Spartans a 17-point edge with 11:33 left. The PAT was Park’s sixth consecutive completion.

However, the Spartan defense made a key stop on the second to last Wooster drive as Barnes tossed an incomplete pass on fourth-and-one at the Case 38 with 5:55 left on the clock. The Fighting Scots’ final drive resulted in a punt deep in its own territory, and the Spartans ran out the final 2:32 to secure their third win of 2012 season.

On the offense, Olson completed 12 of 26 passes for 224 yards and three touchdowns. Sophomore running back Ricky Hanzlik led the Spartan running attack with a career-high 77 yards on 18 carries (4.3 yards per carry), while sophomore quarterback Billy Beecher had a unique role as he rushed 12 times for a career-high 73 yards. The aerial attack for Case was led by Lapcevic. The sophomore snatched a team-high five receptions for 93 yards and scored a touchdown, while Rice had four catches for a career-best 95 yards and a touchdown reception.

Wooster was led by Barnes who went 19 of 32 through the air for 213 yards and had three touchdowns. McIntyre led the Fighting Scots with eight receptions for 90 yards and two touchdowns, while Battaglia had 77 yards on 21 carries (3.6 yards per carry).

As the annual series, which dates back to 1984, between Case and Wooster ends, the Fighting Scots will take a 13-12 lead into the history books.

Following a bye week this weekend, the Spartans wrap up the non-conference portion of the 2012 schedule at Oberlin College at 1 p.m. on Saturday, Oct. 20.