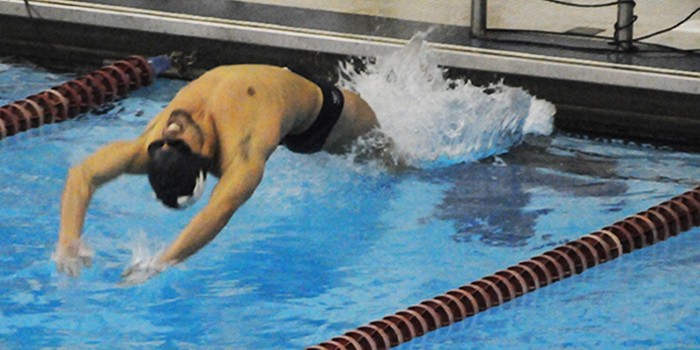 The Case Western Reserve University swimming and diving teams won the inaugural Cleveland City Tournament by defeating Oberlin College by a combined score of 379-212. The Spartans won 22 of the meet’s 32 events, including seven 1-2-3 finishes, at the Carr Pool on Saturday, Nov. 10 in Oberlin, Ohio.

The Spartans made it to the tournament final after defeating Notre Dame College 322.5-145.5 in the opening round and Lake Erie College 306-168 in the semifinals last weekend at the Veale Natatorium.

The win improves the Spartan men to 7-0 in dual meets while the women move over .500 with a 4-3 record. The men are ranked No. 12 in the CollegeSwimming.com/Endless Pools’ top 25 performance rankings.

The men were led by a trio of double winners and a pair of relay victories against the Yeomen.

In the first event, Bailey joined Nickley and sophomores Andrew Bollinger and Elliott Kerbel to win the 200-yard medley relay in a time of 1:36.87. The Spartans also won the meet’s final events as Kerbel, junior Scott McHenry, Hudgins, and Bailey cruised to a 10-second victory in the 400-yard freestyle relays with a time of 3:17.66.

The men won 13 of the 16 events against the Yeomen.

The women also won their opening event as freshmen Rachael Loek and Rebecca Pakradooni teamed up with sophomore Brianna Cain and Dillione to win the 200-yard medley relay in a time of 1:55.06.

The Spartans will travel to Kenyon College for a quad-meet tomorrow, Nov. 17, where they take on the host Lords, Grove City College, and Gannon University. The meet is scheduled to begin at 1 p.m.