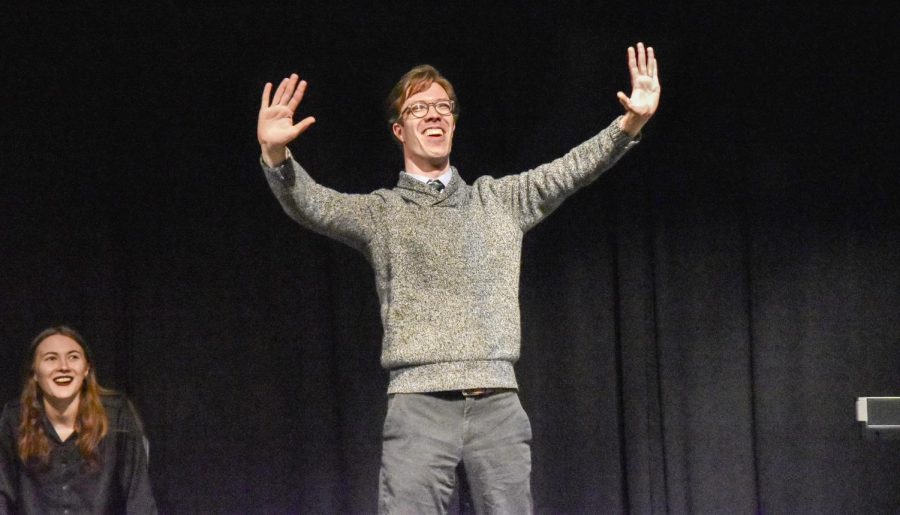 A quiet gasp escaped the crowd as the packed Eldred Black Box went completely dark. Rhythmic claps arose from audience members as a well-known theme song rang out in the almost claustrophobic space around us. The players took center stage; we all cheered in enthusiasm for the hilarity that was to come.

Case Western Reserve University’s premiere short-form improvisational comedy troupe, IMPROVment (“Improv” for short), had their audience doubled over in their seats on Saturday night, as booming laughter echoed off of the walls of the tiny theater. The Eldred Black Box is exactly what its title describes: a box-shaped room painted black from floor to ceiling. The limited seating and tight performance area makes for an intimate actor-viewer experience, something that IMPROVment’s dedicated fan base comes back for again and again.

This weekend’s performance stood out in more ways than one. While it did feature IMPROVment’s usual games, in which cast members acted our short scenes based on audience suggestion, Speakeasy, an all-male a capella group at CWRU, joined the actors onstage.

“We love to perform for groups all around campus,” third-year student Matt Thompson said. “I think for most of us, performing with Improv is one of our favorite gigs of the year.”

Thompson’s energy was infectious as he took the stage, opening for Speakeasy with an impressive beat-boxing solo. The group jumped straight into the starting chords of “Talk Dirty” by Jason Derulo as the crowd whistled and cheered. Thompson darted across the small theater from corner to corner as he belted out the chorus and verses. Whenever he shifted from his chest-voice to a high falsetto, the crowd’s contagious cheering and praise raised his energy level to a new max.

“I love having [Speakeasy] for the music show and I appreciate how they are patient in hoedown, considering we may take a long time to think of something, or mess up,” third-year student and Improv member JP Peralta said.

The actors didn’t skip a beat as they made up lyrics on-the-spot, and Speakeasy’s well-tuned, cheery rendition of the hoedown song added an amazing dynamic.

At the end of the show, the entire IMPROVment cast put on a remarkable 20-minute “Mini Musical.” Cast member Oliver Ruhl acted as a firefighter, opening the scene by sliding down an imaginary fire pole. We let out a few chuckles as Ruhl accidentally hit his head on a literal ceiling pipe. Without breaking character, Ruhl built the mishap into the scene, transforming the pipe into a “horizontal fire pole” and evoking plenty of laughter as he glided across the stage.

Both IMPROVment and Speakeasy have grown tremendously over the years. Peralta described the troupe’s excitement to make their debut performance at the Del Close Marathon this summer in New York City, while Thompson detailed his enjoyment of Speakeasy’s first brotherhood retreat this semester.

Speakeasy will be performing alongside Solstice at their concert on Friday, April 27 at 8:00 p.m. in Harkness Chapel. You can also catch IMPROVment’s End of Semester Show on Saturday, April 28 at 10:30 p.m. in the Eldred Black Box.