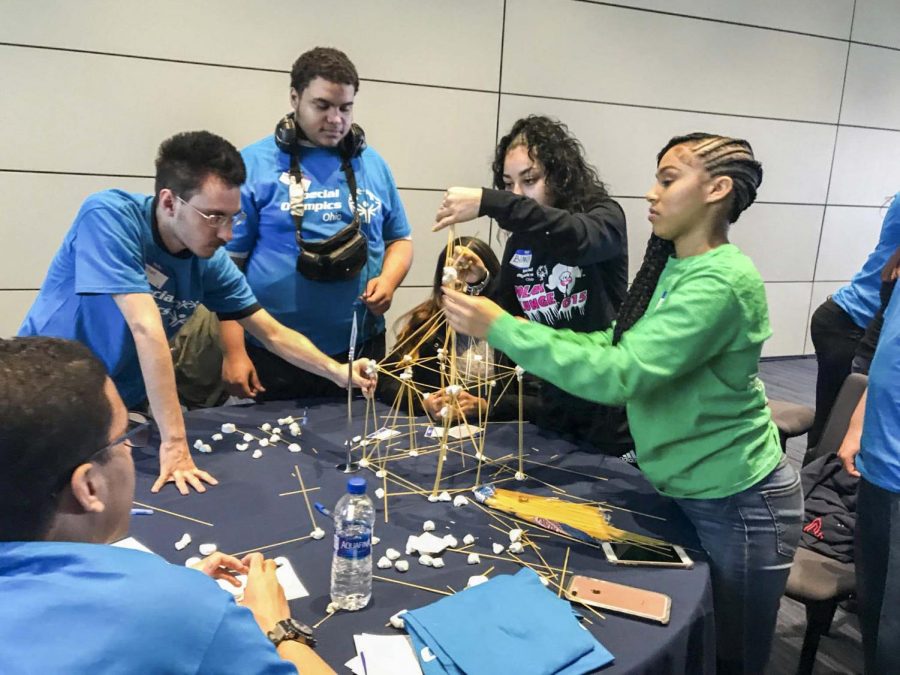 The Special Olympics (SpOly) Ohio Unified Champion Schools Youth Summit participants came together for a photo in TVUC during the Summit's inaugural event at CWRU. The event was hosted by Spartans for Special Olympics, and participants engaged in team-building activities.

President of Spartan SpOly and second-year student Alyssa Edwards has been involved in Special Olympics since she was nine years old, and was a main organizer of the Summit.

“There is no place that separates people based on abilities more than on the fields of competition,” she said, “yet, in Special Olympics, there is such an appreciation of differences and a robust force of acceptance.”

Special Olympic competitions are specifically designated for people with intellectual disabilities, whereas the Paralympic Games are for those with physical disabilities.

Students were purposefully integrated at tables with students from their own and different high schools to promote interaction with other students. This message was integrated throughout the Summit.

“Kids with disabilities can be trapped in a bubble around them,” said first-year student and Tournament Chair Jackie Diaz. “[We aimed to give attendees the] opportunity to meet kids from other schools while still feeling safe.”

Edwards added, “I believe there is incredible power in the naïveté of youth to create change. When you are young, you’re still dumb enough to think your crazy ideas can be real, and you’re dumb enough to actually bring them to life.”

She emphasized the empowerment associated with overcoming challenges, another theme of the Summit.

“I think the most important aspects that these individuals can learn is that there will be many challenges that they will face in their lifetime, yet with every challenge comes a learning experience for them to grow and become stronger,” said Edwards.

Team-building activities, leadership workshops and a panel of self-advocates made up the majority of the Summit.

The panel included Nathan Morgan, an autism social worker and self-advocate, as well as William Gallup and Sean Walker.

Gallup and Walker are both Good Life Ambassadors with the local organization Youth Challenge, an organization which serves Northeast Ohio residents with physical disabilities.

“Although we are better off because of the Americans with Disabilities Act, there is clear evidence that there is more to be [done to preserve and protect it], because we cannot take that for granted,” Gallup said.

Additionally, both Good Life Ambassadors are both avid bocce ball players. Bocce ball is an Italian sport that, in the Paralympics, is designed specifically for people with cerebral palsy, including Walker and Gallup.

Walker is the bocce coach at Youth Challenge, and Gallup is a team member.

“You can best support Special Olympic athletes by treating them like anyone else,” Walker said. “If this is your first experience volunteering, it is totally okay to not know what to do or how to treat someone with disability. You will make mistakes, and so will the athlete that you are working with. What is important is to realize that mistakes happen and it’s okay, and to have fun with it.”

Spartan SpOly’s largest event is their annual Fall Tournament. The Tournament consists of over 100 athletes from local Cleveland schools who are paired up with their own Case Western Reserve University students, known as “buddies.”

David Dolansky, first-year Class Officer Collective (COC) President, participated as a “buddy” this previous fall semester. Dolansky said that seeing “the happiness in the children’s faces” was fun and enjoyable.

“Awareness of disability issues and how to communicate comfortably with people with disabilities is essential for practitioners and educators,” Edwards said. “Lack of awareness can have broad-reaching consequences for quality of life, learning environments in and outside the classroom, and career experiences for college students and employees with disabilities.”

Edwards and Diaz encourage interested CWRU students to volunteer as “buddies” for this upcoming Fall Tournament, as well as becoming involved with Spartan SpOly. Both hope to bring the Summit to Cincinnati and Columbus next year.