Special Olympics tournament a time for new friends and fun 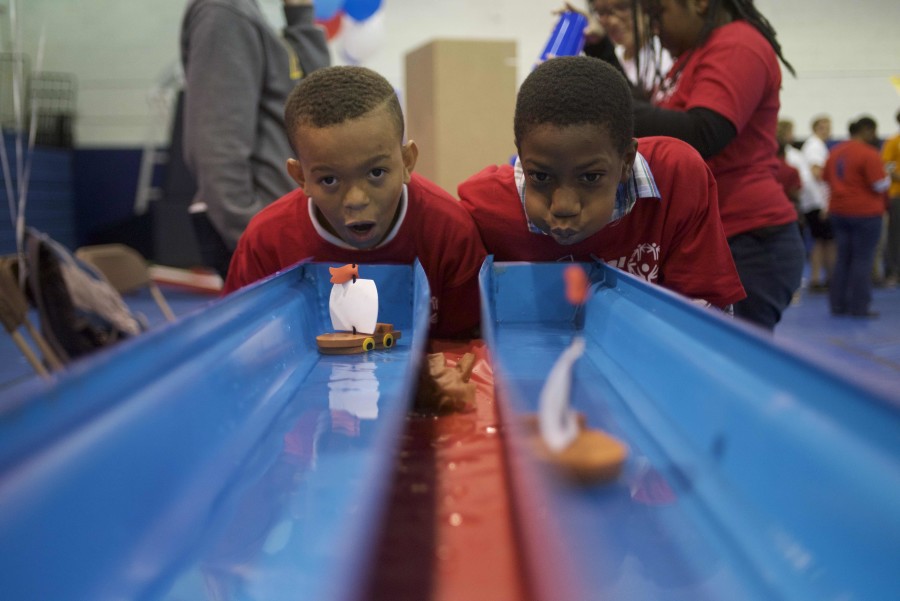 Even with the music blasting in the Veale Center on Friday it was still easy to hear the laughter, squeals of delight and shouts of encouragement which accompanied the Special Olympics Tournament hosted by Spartans for Special Olympics (SpOly).

The usual blue interior of Veale was now mixed in with bright green, yellow, orange and pink balloons, with the red of the Special Olympics logo seen all around. There was a special atmosphere in the air, one of fun, excitement and slight exhaustion as Case Western Reserve University welcomed athletes aged 8 to 20 from local schools for students with special needs to the campus.

The second annual special needs tournament hosted by SpOly was comprised of two parts, both a tournament of soccer and kickball games held on the courts and indoor track as well as a carnival held in Horsburgh Gymnasium. Each group of athletes got a high-energy welcome and their photo taken in front of the Olympic rings, made out of hula-hoops.

“I liked all the cheering when we came in,” said athlete Mary.

Each special needs athlete was paired up with a CWRU student as a buddy and were given a special red shirt to wear. The buddies wore white, while the group leaders wore bright orange shirts and carried signs with each schools name so that no one would be lost as the groups shuffled between the events.

The soccer games were the most competitive, as the ball would go flying off the court and multiple athletes would go sprinting after it, kicking it back into play. It was evident that it was impossible to contain the athlete’s excitement, even to the dimensions of the field.

“It was the best when I kicked the ball and it went in!” said athlete Brett.

However other athletes preferred all the options available at the carnival.

The carnival, which was manned by student groups and some Greek chapters, had all sorts of other games and activities for the athletes and buddies to partake in.

The athletes had their pick of things such as face painting, coloring stations, a whiffle ball activity, a wooden boat race, speed cup stacking, juggling, Bozo buckets, basketball hoops and a photo booth where athletes could dress up in all sorts of crazy items, like a rainbow Mohawk wig, and get their photo taken. In addition a few campus groups also performed for the athletes and their buddies.

“The carnival was the best,” said athlete Johnny. “I got my face painted!”

All the games and activates came to an end around 12:30 pm as the athletes and their buddies, tired from all the excitement headed up to the Veale multi-purpose room for a rejuvenating lunch. With time to just sit, talk and laugh the buddies and the athletes were able to bond and relax.

“I want to come back tomorrow,” said Kenzie an athlete at the tournament.

The excitement wasn’t over however as the teams headed back into the Veale Fieldhouse for the closing ceremonies. In addition to talks from both Lou Stark, Vice President of Student Affairs, and Bill Hatfield, a representative from the Special Olympics Ohio Division, the last big surprise for the athletes were Olympic medals given to them by their buddies.

“Look at my medal,” said athlete Demetrius a huge smile beaming on his face.

As Stark said in his closing ceremony speech, “This day was all about making new friends, creating community and having fun.”

“Did everyone have fun?” Stark asked.