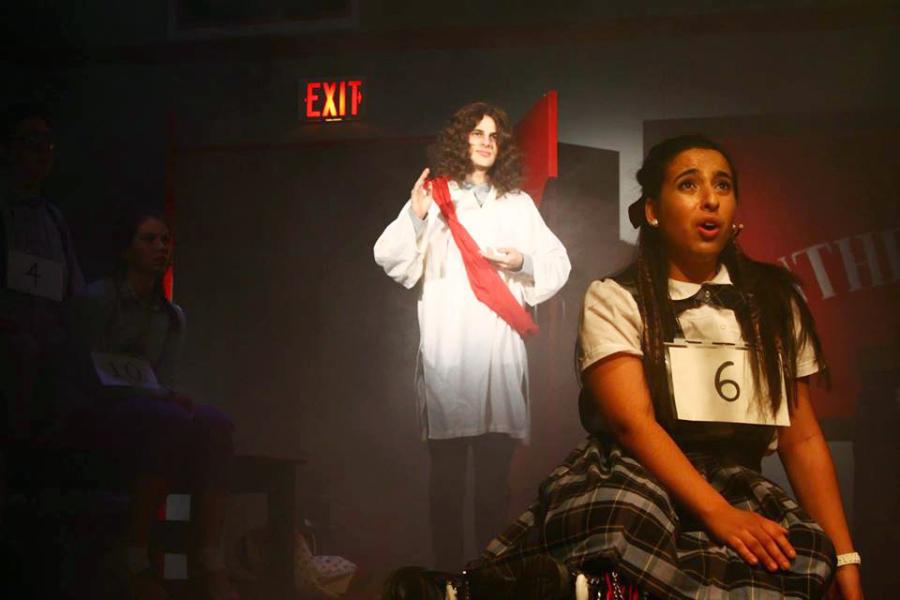 “Could I have the definition please?”

“Could you use it in a sentence?”

This is not a typical spelling bee, as demonstrated by unusual example sentences and definitions unlikely to be found in any dictionary.

“The 25th Annual Putnam County Spelling Bee” is also not a typical musical. This show, which ran in Eldred Theater from Nov. 14-23, incorporates improv comedy and audience member participation into its script.

At the beginning of the show, people from the audience—who have been selected while waiting in the lobby—are called onstage, and sit in the bleachers with the show’s young spellers. They spell words along with the scripted characters, and although some of these words are easy (cow, Ohio) some of them are much more challenging (cystitis, qaimaqam). Although the volunteers are soon eliminated, characters talk, sing and throw candy to the audience throughout the show.

The scripted characters include two judges, six spellers and an intimidating comfort counselor named Mitch Mahoney (Jason Sleisenger), who leads disqualified contestants offstage with a hug and a juice box as part of his court-mandated community service.

The spellers compete for a spot in the National Spelling Bee, and will do whatever it takes to make it to Washington, D.C. The adults are as eccentric as the spellers, and the cast does an excellent job making the characters not only funny, but also likeable and interesting.

The most moving moment in the show comes when one of the spellers, Olive Ostrovsky (Bessie Bulman), is given the word chimerical (definition: highly unrealistic, wildly fanciful). The word brings her need for parental love to the surface as she sings to her mother, who has left Putnam County to go on a spiritual journey in India.

The situation sounds silly, but its introduction earlier in the musical gets the joke out of the way and leaves Olive alone at the competition, with a mother on the other side of the world and a father who would rather work late than come see her spell.

The actors who play the two adult judges, Rona Lisa Perretti (Sara Bogomolny) and Vice Principal Panch (Brett DiCello), act as Olive’s imagined mother and father. The three of them sing an ethereal trio with the rest of the cast doing back-up vocals. In a musical with many cute songs and jokes, this song stands out as an intense moment of emotion. Bulman’s beautiful voice gives it the power to make you care about one of the quirky characters onstage for something more than her spelling skills.

After all, for the kids on the bleachers, this competition is about more than spelling. Marcy Park (Natalie El Dabh) spells to demonstrate her superiority, Leaf Coneybear (Zachary Palumbo) to show that he’s smart despite what his family says and Logainne SchwartzandGrubenniere (Alexis Attinoto) to prove to the world that she can be a winner.

Logainne is the youngest speller, but also the most politically involved. The daughter of two overbearing fathers, she is the president of her elementary school’s Gay Straight Alliance and often makes references to feminism, politics and the corrupt nature of the American food industry. She feels extreme pressure to prove that someone from her background can be successful, pressure that makes her desperate to win the bee. She often repeats a phrase that she probably has heard from her parents: “America hates losers.”

That may be true, but this is a musical, and musicals love losers. And with the help of the characters in this show, the audience is one step closer to loving them, too.