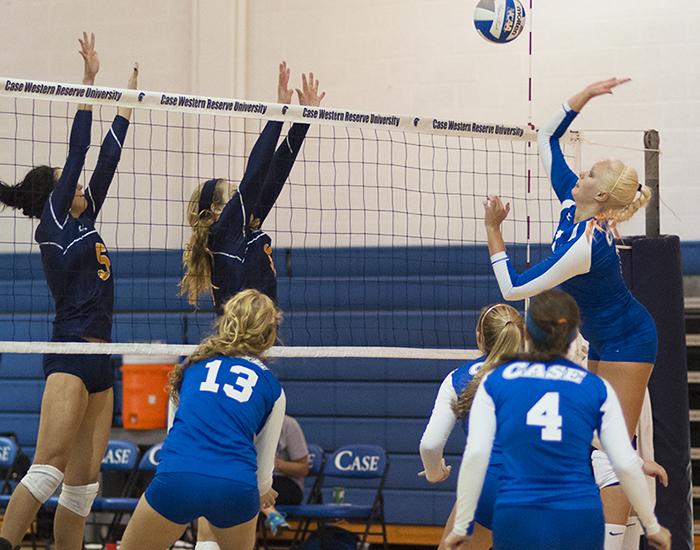 The Case Western Reserve University volleyball team closed the regular season conference schedule with a split at the second University Athletic Association Round Robin, giving it the fourth seed headed into the conference tournament.

The opening day of the weekend saw the Spartans start off strong as they swept conference rival Carnegie Mellon University (12-14, 2-5) by scores of 25-19, 25-18, and 26-24. The team’s second match proved quite the challenge as it faced No. 6 Emory University (23-5, 6-1). The nationally ranked Eagles once again had the Spartans’ numbers, as they ran out to a first set win by a dominating score of 25-16. Case continued to fight back, trying to steal a set, but the Eagles closed out the match in straight sets with wins of 25-22 in the second and 25-21 in the third set.

The second day saw the Spartans fend off an upset scare from New York University (13-11, 1-6). The Violets came ready to play Sunday morning when they jumped out to a two-set lead with wins of 25-20 and 25-16. With the team’s grip on the fourth seed slipping away, the Spartans were able to rebound, tying the match with victories in the third and fourth sets 25-19 and 25-22, respectively. Case was then able to close out the tiebreaker with a 15-11 win to seal the team’s position in the top half of the UAA.

The final match of the weekend did not have any repercussions for the Spartans regarding the standings, since No. 12 University of Chicago (20-6, 6-1) was able to upset Washington University (24-2, 6-1) earlier that weekend. However, the match posed a strong test for the Spartans as they faced their fourth nationally-ranked team of the season. A win for the Maroons gave them a share of first place in the UAA.

Chicago opened the final match with a 25-19 win, but the Spartans evened things out after two sets with a 26-24 win. The Maroons, however, showed why they are nationally ranked, as they were able to shake off the upset bid with a 3-1 win, closing out the third and fourth sets with 25-20 and 25-23 victories, respectively.

On the attack, sophomore Natalie Southard led the way with 43 kills on the weekend; she also finished with 18 total blocks, the top of the team. Behind Southard was freshman outside hitter Carolyn Bogart, who finished with 40 kills. Freshman Caitlin Shipp was third on the weekend, with 25 kills. Other notable performances came from senior Hanna Collins, who led the team with 13 kills against Chicago, and Samantha Buddemeyer, who led the team against Carnegie Mellon with 11 kills.

In the backcourt, senior libero Rachel Gulasey paced the team with 99 digs on the weekend. Fellow fourth-years and defensive specialists Alexandria Drake and Kara Monnin finished with 38 and 35 digs, respectively.

Senior Breana Freeman continued to show why she has set the school record for career assists. The setter finished with 118 assists and 52 digs with a double-double in every match, except against Chicago when she had nine assists.

The Spartans will now close out the regular season with a six game streak that includes a five-game homestand, which began on Wednesday, Oct. 17 with a five set loss to Hiram College. The Terriers (21-5) and Case alternated the first four sets 25-21, 20-25, 25-21, and 16-25. The Spartans tied the match at 7-7 in the tiebreaker but Hiram took six of the next seven points to help secure a 15-11 victory.

The Spartans will then close out the regular season with another Tri-Match with their annual Dig for the Cure philanthropy event when they host Ursuline College and Kenyon College on Saturday, Oct. 27.