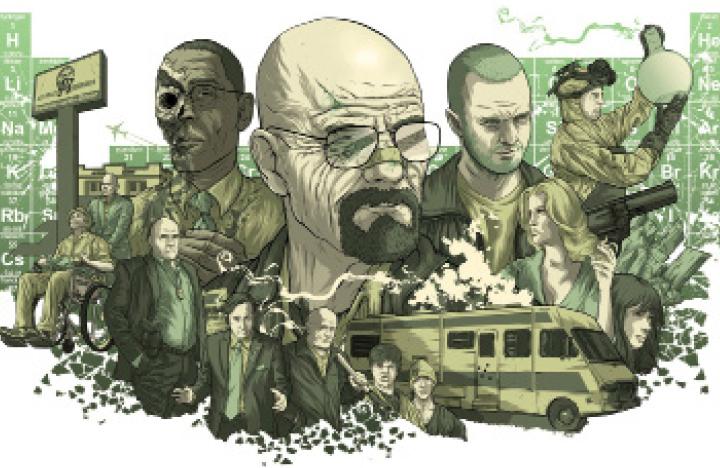 The last three episodes of the hit television series ‘Breaking Bad’ will air on AMC (Channel 11.4) every Sunday night at 9:00 p.m.

As cliché as it sounds, there are two kinds of people in the world: those who are sick to death of hearing about “Breaking Bad,” and those who think the recent bombardment of media coverage still isn’t enough to answer all the lingering questions that remain about the show.

For a show that started off as practically a dark comedy, things only got darker and more dangerous as Walt got more and more embroiled in the criminal world, more concerned with power and money than his initial alleged motive of “helping” his family. Indeed, it’s still difficult when watching the most recent episodes to remember that all of the show’s action takes place essentially within the span of a year.

(It goes without saying that the rest of this article will contain massive spoilers for all episodes of “Breaking Bad” that have aired so far.)
Few things can be more stressful to the audience than seeing what looks like a clear-cut ending arise when plenty of story obviously remains, be it the middle of a book, the middle of a movie or the middle of a television series or individual episode of a tv show. It’s why “Law & Order” never made for particularly nail-biting drama— if a likely suspect seemed guaranteed to be behind bars within the first 20 minutes, the viewer always knew more twists would inevitably come to fill the remainder of the hour.

Now that “Breaking Bad” is down to its final three episodes, time is rapidly running out, but three hours is more than enough time for Walt’s much-awaited arrest to lead to several more plot zigs and zags. Sunday’s episode pulled the old trick of ending on a cliffhanger (and what a cliffhanger!), but even more perilous to ponder are the tantalizing glimpses into the future than opened both the first and second halves of the show’s final season. We know that no matter what happens in the current shootout, Walt will manage to survive long enough to regrow his hair, get a new identity, have a birthday breakfast at Denny’s, and then come storming back to his old house with a massive gun in the trunk of his car.

Much of season five has been relatively low on tension because compared to the earlier seasons, Walt’s business and personal life seemed to have finally overcome all threats; he had a business field almost totally devoid of serious competition, he literally had more money than he could even store and all those with the power or motivation to kill him or harm him were largely dead themselves.

There were always two ticking time bombs in the persons of Jesse Pinkman and Hank Schrader though, dangerous because of their closeness to Walt, yet also protected by that same closeness. Hank’s dogged determination to pursue “Heisenberg” at all costs may initially seem to have sealed Walt’s fate, but the real catalyst for his capture is Jesse. That Jesse would be the one to lead the police to his former boss (not to mention former chemistry teacher) seems inevitable; that the egomaniacal Walt would choose to view this as the ultimate betrayal seems inevitable as well.

The relationship between the two of them is necessarily a complicated one, yet for as much as Walt took Jesse for granted and manipulated him over the course of the show, it’s telling that he still cannot bring himself to personally kill him, and could only bring himself to ask others to kill him after his wife forced the idea upon him (following Jesse’s threatened attempt to burn their house down, of course).

Walt’s relationship with Jesse also contrasts starkly with his relationship with Todd, the boy hired to replace him and the eventual meth cook running Walt’s former empire. Simply put, Todd is no Jesse. Where Jesse’s concern for the well-being of children caught in the crossfire of the drug trade always humanized his actions, Todd had no compunction about shooting a boy on a bike simply for being in the wrong place at the wrong time.

While Jesse usually had the ability to cook meth at a level surpassed only by Walt himself, Todd struggles to even cook it well enough to generate the characteristic blue color that has become the Walter White “brand” and indicator of quality. And while Jesse’s loyalty to his bosses, friends and coworkers has always made him a valuable asset to them, Todd seems to have no problem with killing anybody he’s told to kill by anybody else, provided there’s something in it for him. (Probably also relevant is the fact that Jesse’s family members aren’t members of a murderous white supremacist gang!)

Had Walt not constantly taken Jesse for granted, he wouldn’t have had to ask Todd and his family to kill him, and the entire situation that the episode ended on would’ve been avoided. As it stands though, all the audience can do is speculate about what happens next until the final episodes themselves actually air.

For all those who have been living under a rock the past couple years but who still want to get caught up with the show by the time it ends, the first four seasons are available streaming on Netflix, while the first half of the final season is available on DVD. All the episodes of the second half of the final season that have aired so far are available to stream on the AMC website, but only if you have authorizing information from your cable provider.