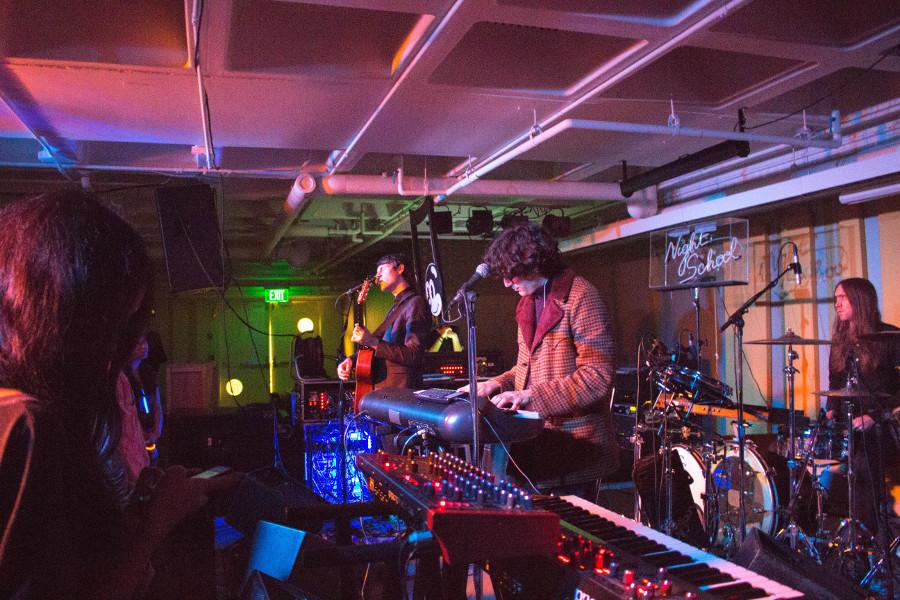 Synthpop band Neon Indian played to a large group of students at this month's Spot Night.

Last Friday night, hundreds of students flooded the basement beneath Leutner Commons to bask in the music of headlining electronic chillwave band Neon Indian and opener Explorer Tapes. Known for their 2011 hit “Polish Girl,” Texas-based Neon Indian released their third album, “VEGA INTL. Night School,” in mid-October. Despite coming off of two months of traveling and touring to promote the album release, the members of Neon Indian brought their signature exuberant energy to the packed basement.

With the glass walls between L3 and The Spot removed to hold a larger capacity, the crowd splintered. A few exhausted students and their coats sprawled at L3 dining tables while a sweaty and dense crowd surrounded the Spot’s stage. The little-known but experienced Los Angeles-based group Explorer Tapes, a frequent opener for Neon Indian during their recent tour, drew applause for their set, and the crowd buzzed in anticipation as they waited in the dark of the low-ceilinged Spot.

When a white neon sign with the cursive-scrawled phrase “Night School” blinked to life, groups of excited students pushed past their peers toward the low stage. For those familiar with their synthpop style, Neon Indian did not disappoint.

The headliner, illuminated from behind by the neon glow, kicked off their show with the funky “Dear Skorpio Magazine” before segueing into the popular single “Annie.” The danceable music was interrupted only by a friendly back-and-forth with the crowd and the occasional flickering of The Spot’s overhead lighting. The band also departed from their typical setlist to dedicate a celebratory and humorous rendition of “Happy Birthday” to their bassist.

After a long set, Neon Indian retreated backstage before emerging for a lively encore for the diminished but passionate crowd of students. After bringing down the house with the catchy “Polish Girl,” the band moved to the floor to mingle with students waiting for signatures and photographs.

Fourth-year student Eddie Peng danced through the show. Before and after Neon Indian’s set, Eddie and his friends had fun chatting with and getting to know the down-to-earth band members.

University Program Board Concerts Committee Director Kapil Patki couldn’t have been happier with the turnout and the crowd, noting that “Neon Indian put on a great, high energy, positive show. Explorer Tapes was also excellent.”

Indeed, for one night, The Spot boomed with its former energy. Despite the lack of alcohol and some technical issues, the charismatic Neon Indian and Explorer Tapes did not fail to impress the electrified student audience.

Those who enjoyed Neon Indian can look forward to UPB’s spring Spot Night line up, which is currently being planned.