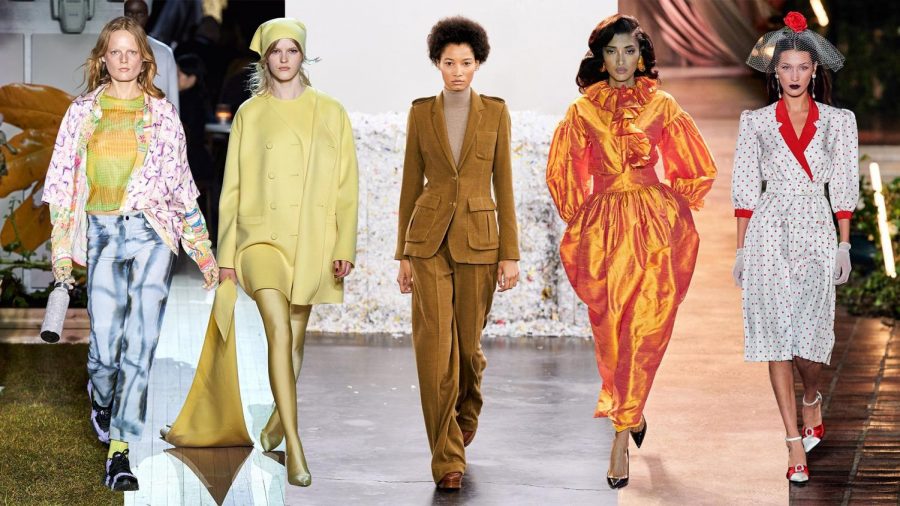 Models take the runway at the NYFW.

The fashion tents were pitched and taken down quicker than the sandal straps tucked into jeans trend became a real thing. Another spring fashion week has come and gone again, taking the Big Apple by storm and leaving us with the blueprint of what we will all be wearing this upcoming fall/winter season.

Running from Feb. 3 to 12, designers from near and far came to present what their vision was for the upcoming season. But, instead of feeling all of the usual excitement and fanfare that New York Fashion Week (NYFW) brings along with it, something seemed to be off.

This fashion week was not like rest, since many big-name designers chose to not present collections to the public this time around. Some cited that the return on investment of creating and producing a fashion show wasn’t worth the financial bind, while others cited the disruption in the world of fashion and in general as reasons why they choose to sit out this year’s fall presentation of shows.

However, for those designers that forged ahead with showing their creations to the public, did so in new and innovative ways that went beyond the conventional catwalk runway show.

When it comes to putting on a spectacle of a fashion week show, there are a few designers that immediately come to mind.

Notably, Ralph Lauren, with his groundbreaking four-dimensional fashion show, which took place outside of his 888 Madison Ave. flagship store. It was the first show of its kind to ever be presented in that way and changed the way designers looked at presenting their own work. Lauren’s inspiration for the show was to celebrate 10 years of digital innovation, and how far technology, and the role technology plays in fashion, had come since then.

As if they’ve been waiting and watching from the wings, over the past few seasons of NYFW, other designers have begun to turn their own traditional shows into experiences for their own guests to enjoy and marvel in.

This shift noticeably began at last season’s fashion week, with spring/summer 2020 collections shown from Sept. 5 to 13. Designers took to higher heights, more lavish venues and added more diversity to the runways, not only in skin color, but also having models of varying ages show off their newest collections.

Transforming an ordinary catwalk into an experience is what Nicola Glass, the creative director of Kate Spade New York, does best. Although, Kate Spade is no stranger when it comes to having over the top marketing campaigns and promotion, using the gorgeous backdrop that is New York City in many of their publications, it wasn’t until Glass joined the company in January 2018 that the company’s shows began to have a more cohesive and visual impact.

During the presentation of her spring/summer 2020 collection, Glass really dug into the concrete jungle vibe of the city and took the show outdoors. To help balance the urban safari and modern-day preppy themes that were shown throughout the collection, she took her guests through a walk in the garden; more specifically, Soho’s charismatic and elegant Elizabeth Street Garden. Models of varying ages, body types and from all walks of life added to the whimsical, yet structured feel of the show.

Glass’ vision for how to find innovative ways to show off her new line didn’t end there. This season, she chose to have an invitation-only showing of her fall/winter 2020 collection, which was held on Feb. 13 at an unknown location. Okay, we really just didn’t get an invite, so we don’t know where the super-secret location was.

However, we were given a backstage look at what it takes to put on a show, or rather experience, of grandeur. The public was able to follow models, assistants and photographers in a documentary-like video that was posted on the company’s Instagram profile.

Those who were lucky enough to snag a seat at her private viewing last week, instead of seeing models show off the new clothes in person, could see the designs up close and personal, as they were presented on mannequins with a promotional behind-the-scenes video playing in the background.

The rest of us can still catch glimpses of the upcoming collection through the company’s Instagram account or wait to see it hit the stores, starting in mid-to-late August. While this year’s fashion week left a lot to the imagination of the audience, it’s nice to see designers like Glass try to stand out and change the viewing experience.

We’re already counting down the days until fashion’s next biggest fashion holiday to see which designers will go above and beyond in showing the newest trends.