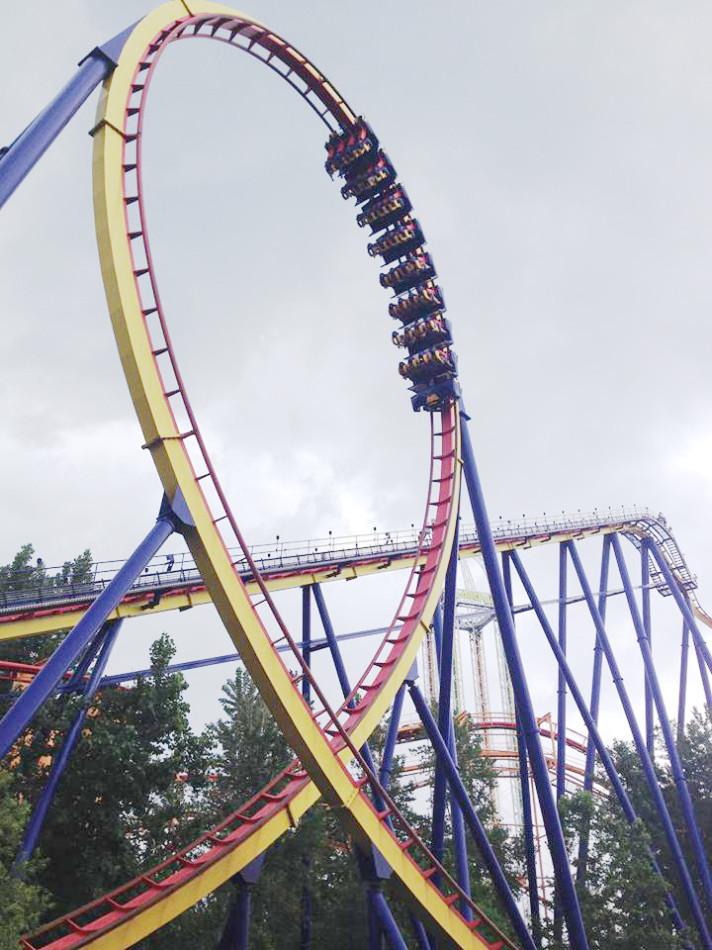 Mantis will be revamped for Cedar Point's next season.

Early last week, amusement park Cedar Point released a cryptic, overdramatic video featuring a lot fake crying and the sounds of an old film reel, with lines that read “Goodbye is never easy / But in this case, it is.”

Then after a grim reaper (scythe and all) makes it way up the stairs to the roller coaster train station, the screen fades to black with the words: “Take one last stand.” Cutting to pictures of the roller coaster in black and white, the logo for the Mantis ride comes up on the screen and says “The Mantis gets squashed Oct. 19.”

So they’re closing and dismantling the ride? That’s some of the speculation, but Cedar Point worker Will Hollingsworth doesn’t think so.

Hollingsworth has worked at Cedar Point for one and a half years, and throughout his time there, rumors of the Mantis closing have circled the park. He said “A lot of the people in the park didn’t see it as a big surprise.”

From talking to people in the park and “higher-ups” he said the big speculation is that the ride will transform into a sit-down roller coaster, where riders’ feet will dangle over the track. “I don’t think you will see the ride being taken down. The ride is only 18 years old,” said Hollingsworth.

The stand up roller coaster was a big, unique attraction in the ‘80s and ‘90s. When the Mantis opened in 1996, it set several stand-up roller coaster records for height (145 feet), speed (60mph) and steepness.

But since then, the stand-up roller coasters have become very rough, and the CEO of Cedar Fair, who joined the company two years ago, seems to want to redo the rides that have become uncomfortable for the riders. Cedar Fair’s theme park in Canada, Canada’s Wonderland, announced in the beginning of August that they will be taking down the stand-up roller coaster there.

Asking around for theme park fanatics at Case Western Reserve University, students have noticed the ride’s discomfort. Michael David, senior at CWRU, said, “[My friend mentioned] how glad he is to see it go. Apparently, the ride never sat well with his stomach.”

Some riders said that Mantis created headaches. Others noticed that the ride made their legs sore (there is a center bar between your legs, but it moves a little bit more than it should. This makes riders rely on leg muscles to keep stand-up straight).

The Mantis, built by the same company who built Raptor and Gatekeeper, will be converted with new trains and rebuilt sections of track. Hollingsworth said it seems that Cedar Point is going to market the Mantis as a new ride without actually making it a new ride: new paint, name, etc.

When asked about the “King James” rumor (Cedar Point tweeted that if Lebron James came back to Cleveland, they would rename a roller coaster “King James”), Hollingsworth said that he didn’t think (and hoped they wouldn’t) name the ride King James. The park takes out trademarks on the names for their roller coasters.

One of the names they do have a trademark for, but no ride with the name, is the French name for werewolf: rougarou (pronounced roog-a-roo).

Maybe it would make sense with the old-fashioned horror theme of the video Cedar Point released. Or maybe it’ll just add to Cedar Point’s ever-growing thrills. Regardless of Mantis’ new name, many Ohio roller coaster lovers will warmly welcome its anticipated changes.