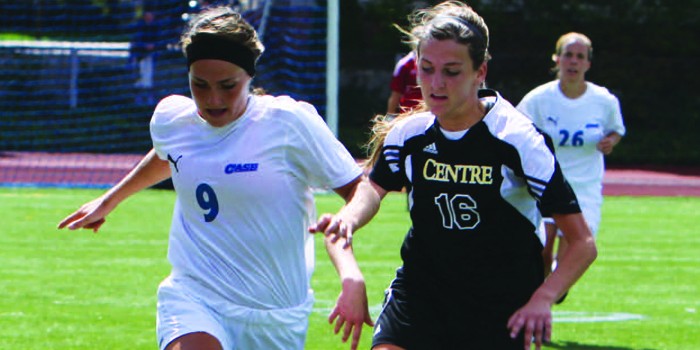 Forty-five total shots would seem to belong on the stat line of a professional basketball game, not a college soccer match, let alone one with a 0-0 final score. That is the exact result the Case Western Reserve University women’s soccer team achieved by the end of 110 minutes in its conference matchup with No. 22 Brandeis University.

Leading the Spartans on the offensive side of the ball were junior forward/midfielder Leah Levey and sophomore forward Christine Straka, who each tallied four shots on goal. Coming off the bench, sophomore midfielder Caitlyn McGillis also helped pepper Brandeis with shots, adding three shots of her own.

Straka almost had a SportsCenter-worthy goal when she headed a perfectly crossed ball towards the inside post, but was robbed by the Brandeis keeper’s fingertips.

The standout performance of the game, however, came from freshman goalkeeper Megan Romelfanger. Romelfanger, who has taken over full-time keeping duties for the Spartans after a concussion to fellow goalkeeper Cameron Casson, has been stellar on the goal-line this season, letting in one goal so far this season, in over 600 minutes of playing time.

In Saturday’s game against the Judges, Romelfanger had to contend with 28 shots, including 14 in the second half. Even with a career-high nine saves, Romelfanger was more impressed with the play of the team late in the game than her own.

“By going for it in overtime, [the team] really gave us the upper hand,” says Romelfanger. “I think that if we had had one more overtime period, we could have gotten one, if not two more goals.”

Despite being outshot 14-2 in the second half, the Spartans came back after the end of regulation with renewed effort and registered perhaps their best chances of the game when Leah Levey and her sister, senior midfielder Deena Levey, registered back-to-back shots on goal which were narrowly stopped by Brandeis keeper Michelle Savuto.

For her performances this past week, including two shutouts and ten saves, the University Athletic Association recognized Romelfanger as its defensive player of the week. One save on Saturday stands out particularly, as a representation of the Romelfanger’s growth as a keeper.

Brandeis sophomore Dara Spital, who led the Judges with eight shots, got the ball with an open look and laced it towards the top of the net. Romelfanger was able to get her fingers under the ball and tip it into the crossbar and back into her hands, eliminating one of Brandeis’ best opportunities.

The Spartan defensive line deserves credit as well for preventing even more opportunities for the Judges.

“At one point, when one of the Brandeis players had the ball in the center of the box, Lauren Wichman got a foot in front of the ball and prevented what would have been an open shot,” says Romelfanger, crediting a defense that has not only let in a goal in nine halves, but has earned two straight UAA Defensive Player of the Week awards. Senior center defensive back Maeve Goede got the award last week.

The Spartans look to begin their impressive start to UAA play this weekend, with matches against the No. 1 nationally ranked Emory University and Carnegie Mellon University. Case will travel to Atlanta on Friday to play the Eagles at 5 p.m. and then fly to Pittsburgh to take on the Tartans at 11 a.m.